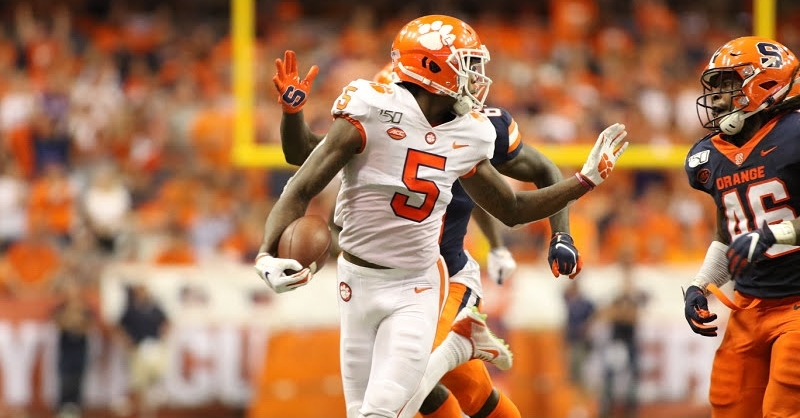 Clemson has been on a revenge tour of sorts, proving to its opponents that last year’s games shouldn’t have been as close as they were and wanting to leave no doubt who the better team is.

With a 41-6 win over Syracuse (1-2 overall, 0-1 ACC) Saturday night at the dome, Clemson improved to 3-0 overall and 2-0 in conference play, leaving no doubt who the best team in the ACC is.

OFFENSIVE PLAYER OF THE GAME: Just five months removed from tearing his ACL, Amari Rodgers looks to already be in midseason form. The junior wideout excelled in rehab and in the weight room and he left no doubt Saturday night that he’s ready to reclaim his starting spot. Rodgers had four catches for 121 yards and two touchdowns. The highlight of which was an 85-yard tightrope down the sideline for his second score of the game.

DEFENSIVE PLAYER OF THE GAME: With as well as the defense played, it’s hard to pick just one player but Isaiah Simmons is playing on a different level right now. He can line up at linebacker, safety or defensive end and doesn’t miss a beat. His stat line for the night: 11 total tackles, two sacks and one tackle for loss.

*Each team punted on its first possession but the Tigers went right to work on their second possession. Lawrence threw a ball up that Tee Higgins high-pointed for a 16-yard gain on third down, and a few plays later Amari Rodgers took the top off the defense and gathered in a 16-yard pass in the end zone for a 7-0 Clemson lead.

*Clemson promptly returned the favor – Syracuse Tommy DeVito was flushed from the pocket and threw a pass into the waiting arms of Mario Goodrich at the Clemson four-yard line. Two plays moved the ball out to the 13, and on third down, Lawrence tossed a screen to Rodgers. Rodgers broke a tackle and then broke loose down the sideline, outrunning everybody to complete an 87-yard touchdown reception as the sellout crowd groaned in disbelief. With 9:42 to play in the third quarter, Clemson led 24-6.

STAT OF THE GAME:Three of Trevor Lawrence’s five interceptions this year have ended up with the other team getting the ball in the redzone. Clemson’s defense has given up zero points on those possessions.