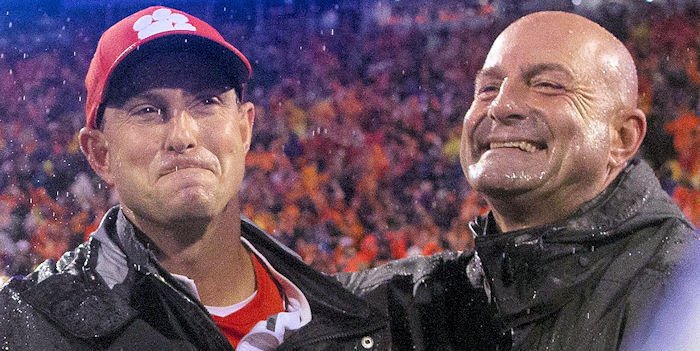 Swinney's drive and passion continue to push the program forward

Dabo Swinney was fired up this week at his weekly news conference. Yep, maybe even more than usual.

His passionate response to a question about Ryan Carter’s recruitment has been a big video hit throughout the week since Tuesday. Remember Carter? He’s the defensive back from Grayson High School near Atlanta who was recruited only so Clemson could land his teammate – talented defensive lineman Robert Nkemdiche. At least, that’s what some folks would tell you.

Nkemdiche turned into a good player for Mississippi, and he is currently in the NFL, but Carter hasn’t been a slouch for Clemson. In fact, he has grown into a really good talent at defensive back for the Tigers.

On Tuesday, it seemed like Swinney was fed up with the narrative that it’s a surprise that Carter has become a terrific college player.

That singular focus is what drives everything about Swinney and the Clemson program that has pushed the program to the ridiculous heights in recent seasons.

Swinney's drive and passion continue to push the program forward "

There are many examples through the years of professional or college teams having a coach who is seen as a disciplinarian only to fire that coach and then hire a “players’ coach.” Sometimes that works out, and then sometimes it doesn’t because the “players’ coach” lets the players get away with a little too much (or maybe a lot too much).

There isn’t anything soft about Swinney and the Clemson program. Swinney works the players hard and has high expectations for them on and off the field, but he also genuinely cares about their well-being and what’s next for them.

That balance is admirable, and while it should be the goal for every coach, it isn’t always achieved. That’s really who Swinney seems to be, and it’s not forced or phony. That makes him a coach players want to play for.

Players aren’t dumb. They can tell when coaches are genuine, or if they’re just putting on an act in the recruiting process to land the top recruits.

There’s nothing phony about Swinney. He is who he is, and he puts it out there for everyone to see. That resonates with the players (and their families), and that genuine way of running the program certainly has worked.

It has worked in the past few years with multiple ACC titles and a national title, something Clemson hadn’t achieved since the 1981 season. It’s certainly working with this year’s team, which is off to a 5-0 start, including three wins over top-15 teams in September – something no other program has accomplished.

And it will continue to work, starting Saturday with Clemson’s homecoming game against Wake Forest. Sure, there are probably bigger games on the schedule the rest of the way (N.C. State on the road and Georgia Tech at home at least look dangerous), but Clemson’s focus will be on Wake Forest instead of what’s to come.

Swinney won’t allow that. He will keep the players humble, focused and paying attention to all the right things.

That’s just what a “players’ coach” does.