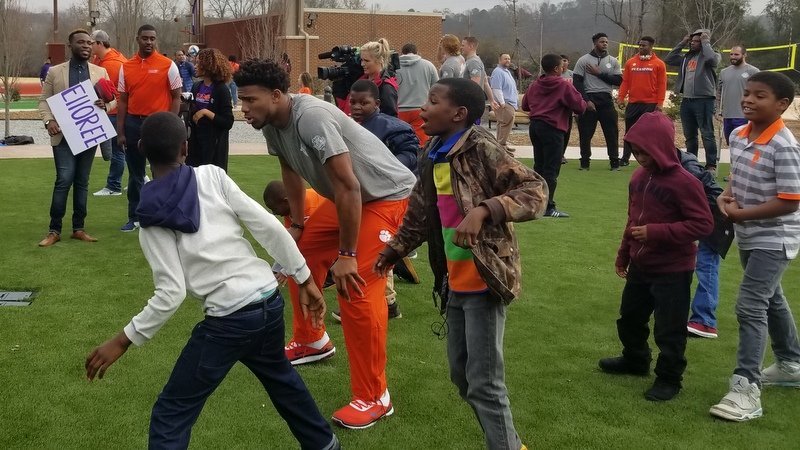 Members of the team pose with some of the kids

CLEMSON – Clemson quarterback Kelly Bryant stepped into the huddle, tried to quiet his teammates, and called for a fly route down the sideline. He stepped to the line, but before he could launch a pass or even “hike” the ball it was snatched out his hands by an excited 10-year old that had decided to take matters into his own hands.

It wound up being a touchdown in more ways than one.

Bryant and the rest of his Clemson teammates spent Monday morning and the early afternoon hosting more than 200 hundred children from area elementary schools at the Allen Reeves Football Complex in Clemson. The event, “PAW Journey: Kicks, Cleats and Kids,” was a part of Dabo’s All In Team Foundation, PAW Journey and the Call Me Mister programs.

The assembled groups received a tour of Clemson’s brand new $55 million football facility, local children got the opportunity to meet, socialize and play games such as Whiffleball, tag football, basketball and putt-putt with the players. At the end of the event, every child received a brand new pair of shoes, which was funded by Dabo’s All In Team Foundation.

Running back Darien Rencher gave a speech to the kids about living life the right way, and he was humbled by the experience of being able to give back to the community.

“I think that is the epitome of what we do,” Rencher said. “You don’t get all of this stuff and don’t give back at all. I think with Coach (Dabo) Swinney, and his message to our program is that to get a lot, you have to give a lot. I think that is what we do here.” 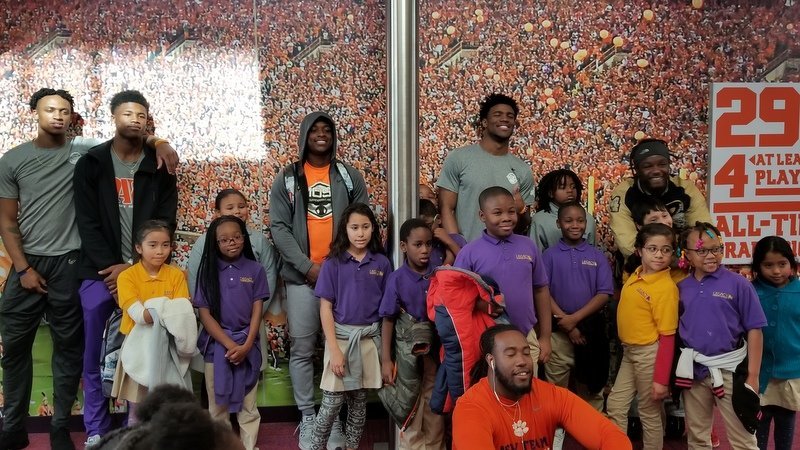 Members of the team pose with some of the kids "

Swinney said he wants his players to experience giving back.

“One of the things I want our players to take from this program, when they leave here, I want them to experience giving in some form or fashion,” Swinney said. “Just giving to others and not wanting anything in return … just the joy that comes with giving to somebody else.

“For them to have the opportunity today to bless these kids and to put a smile on their face means a lot. These kids don’t care if they are Christian Wilkins or Drew Costa. No offense to Costa, but he is the last man in, right? You know? They are just thankful they get to be a part of this, but for us, this is kind of what we do.”

Kicker Christian Groomes, who went to nearby Daniel High School, was seen chasing excited kids all over the facility. He did all of it with a big smile.

“We want to just take the initiative and lead, and that’s what Clemson football is helping us learn. Today, we had three groups running around the facility, getting tours, getting pizza, having a good time and playing outside,” Groomes said. “It was just fun to interact with the kids and give back to the community. Especially with me being from here and growing up here my whole life, this has been really cool seeing kids from my elementary school coming here and getting a pair of shoes. Seeing the smiles on their faces is incredible.

“I was just really happy for them to be here, and I’m glad they were able to join us. This was probably a once-in-a-lifetime opportunity for these kids, and it’s just really awesome for us to be able to do that. From the last guy on the team to Hunter Renfrow, they look up to all of us. It’s just awesome to be a part of something special like this.”

Swinney wants to make sure his program impacts people’s lives in more ways than just what happens on the field.

“This is a part of our program … to serve the community and to serve others, and learning the value that comes with that and just the pure joy that comes with impacting somebody’s life in a positive way,” Swinney said. “It is not always through your finances. It can be through your time and just your talents.