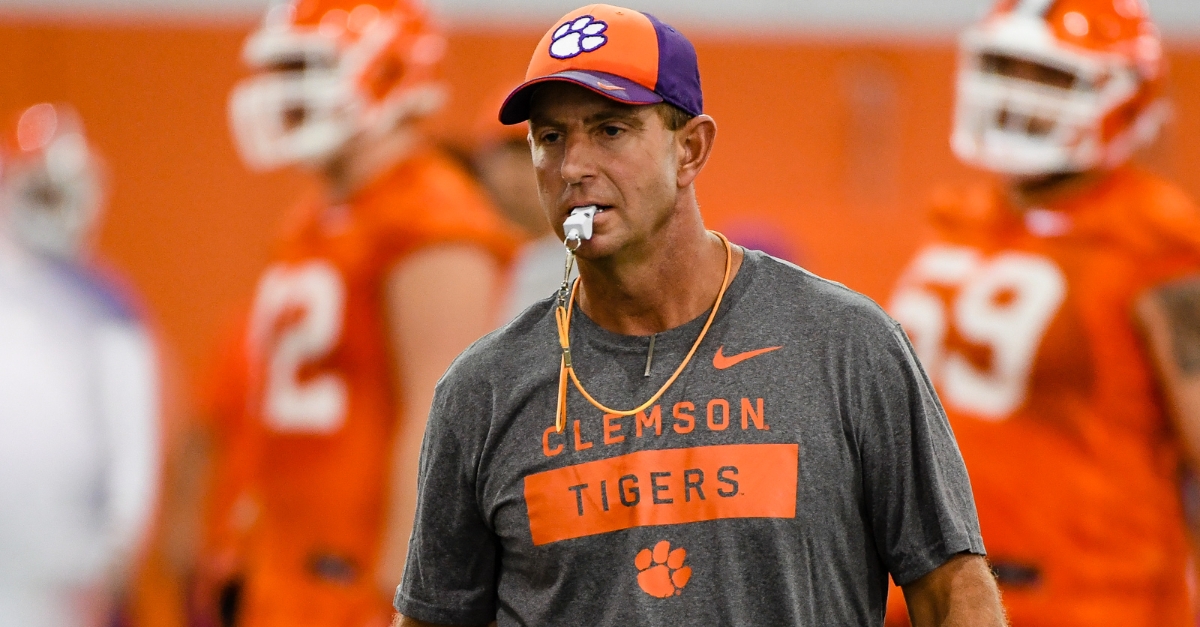 Swinney jots down his lessons on a sheet of loose-leaf paper.

There are plenty of coaches across the country that would like to get a peek at Dabo Swinney’s makeshift notebook about what he’s learned as a head coach.

Swinney was talking to the media this week and said that after he had been a head coach for a year, a member of the media asked him what he’s learned in his first 365 days at the helm of the Clemson program. Swinney didn’t know how to respond to the question without further thought.

He went back to his office and sheet of paper and wrote “What I have learned as a head coach” across the top of the page. One page has now turned into five pages as he continues to grow – and learn – as a head coach.

“I just write little notes on it along the way,” Swinney said.

Saturday's contest will be Clemson's 150th game under the leadership of Swinney. Swinney's 149 career games as head coach are the second-most in school history, trailing the 295 games coached by College Football Hall of Famer Frank Howard across the 1940-69 seasons. With a 119-30 career record, Swinney enters the contest with a career winning percentage of .799, the 17th-best winning percentage of any coach in major college football history with at least 10 years of experience.

Swinney passed Bob Stoops (.798) with Clemson's victory at Syracuse last week. With a win this week, Swinney can improve his career winning percentage to .800 and become the 17th coach (minimum 10 seasons in major college football) to reach that career mark all-time. Swinney's impact at Clemson, however, has not been confined to the win column. Last week, Swinney was named honorary head coach of the 2019 Allstate AFCA Good Works Team for his leadership in the community and his commitment to giving back. Along with his wife, Kathleen, Swinney and Dabo's All-In Team Foundation have given back nearly $5 million to programs and initiatives throughout South Carolina since 2009.

What has been the most important lesson he’s learned along the way? How to manage his time.

“I think that is probably the biggest thing,” Swinney said. “I would probably say for any new head coach, it takes a little while to try and figure that out because there is just no way … you can be very, very prepared for a job, but until you do that job there is just no better teacher than experience.

“When you first get a job there is just so much to do from organization, processes, philosophies, the people. Just getting everything and the synergy you need to be successful. It is a very hard thing. So, in the initial stages, it is a natural instinct to do too much. So, you can become inefficient that way. It takes a little while to kind of figure out and get things in order the way you want so that you can be efficient and really manage your time and the organization the way it should be.”

After 11 years on the job, Swinney needs another piece of paper.

“I need another piece of loose-leaf paper because I just write random things down,” he said. “It is just things I have learned along the way. I am always learning. I have a long way to go. When I grow up one day, it is going to be awesome.”