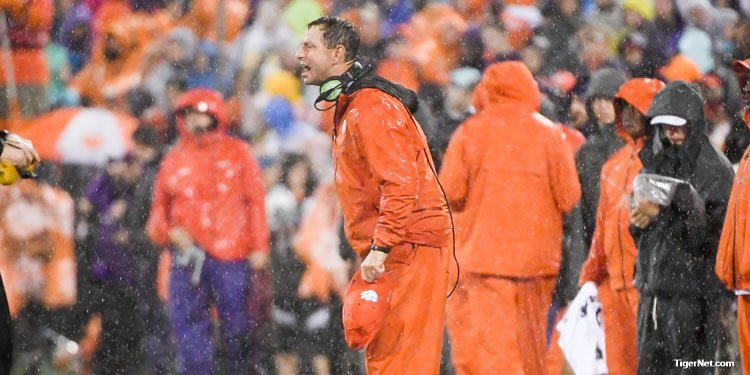 Clemson’s streak of 13 consecutive night games on the road is over.

The streak is over.

Clemson’s streak of 13 consecutive night games on the road will come to a screeching halt this Saturday when the Tigers play at North Carolina St. in a crucial ACC Atlantic Divison showdown. The game is scheduled to kick off at 3:30 p.m., and even though it will end under the lights, head coach Dabo Swinney will be happy to get home before midnight.

He also didn’t hide his happiness because of the afternoon kick.

“I’d be lying if I said it wasn’t happy,” Swinney said. “We’ve played 13 night games in a row away from here. That’s a lot of games and a lot of 5 and 6 a.m. in the mornings. I was happy about it. This time of the year, late in the season, you don’t control those things so we don’t really spend any time worrying about it. You just embrace it. We went 12-1 in those 13 games. We don’t make a big deal out of it. Certainly, when I heard it was 3:30, it didn’t disappoint me, that’s for sure. At least we’ll get home around midnight, I guess.”

The Tigers defeated Georgia Tech after having two weeks to think about a loss to Syracuse, and N.C. State is coming off Saturday’s blowout loss to Notre Dame. However, Swinney said the Tigers won’t be worried about the Pack’s motivation for revenge. Clemson defeated the Wolfpack 24-17 last season.

“We’re not worried about N.C. State and what their feelings are. Our guys know how fortunate we were to beat them last year. This is a great a great football team,” Swinney said. “This is playoff football right here. It’s November and you’re just trying to win and move forward if you want to stay in the hunt for this league. Everyone knows what’s at stake. We’re looking forward to a great challenge. They’re a heck of a team who has had a great year. Very talented and impressive. I’ve watched them a few times this year on some different crossover tapes. I know we’ve got our hands full.”

Clemson’s streak of 13 consecutive night games on the road is over."

“Hope nobody got a cold last night. Just really proud of our team and our staff. It was a very well played game in very tough circumstances. Just a great job responding all the way around. It’s good to get back on the winning side of things, get that seventh win and stay in the hunt. That’s what we’re trying to do. Just proud of how the guys competed.

“Offensively, we played with good tempo. We ran the ball effectively. We lost 32 yards because of our snap issues that came off of our rushing total, but I’m very pleased with how we were able to run the football. We still stayed aggressive.

“Defensively, it was just a really dominant performance. I’m really proud of our D. From start to finish, we did a great job of leveraging the football, which really cut those alleys down. I thought our guys on the edge really did a great job of defeating the blocks on the perimeter. That’s critical because it tightens the perimeter up and shortens those alleys. It starts with the guys up front. I thought we did an excellent night all night in the trenches. That’s a tough team to play and get ready for.

“It was good to see Alex (Spence) go out there and make a kick in sloppy situations. Our kickoff coverage team, I really like how those guys are playing. They’re having fun. We did a good job in the punt the game just trying to create field position when we had to.”

Muse broke a bone in his hand early in the game and came back to play with a huge cast on his left arm.

"Actually Van (Smith) had to play with a cast earlier," Swinney said. "He broke a little bone in his thumb and had to wear a cast. We have had it a few times. He will be reevaluated in the morning. They are going to do another X-Ray in the morning, but I don't think it will be anything that will keep him out of being able to play. Just got to protect it. It will certainly it will limit his ball skills, but still should be able to do everything else. They will re-evaluate him in the morning and we will go from there."

"The biggest injury we had was James Edwards," Swinney said. "He is a walk-on freshman d-lineman for us. He actually dislocated his kneecap in warmups. That was the first time I have had that happen. That was definitely a bad injury, and he is going to have to have surgery on Tuesday and will probably miss three or four months. I really hate that for him. Great young man. He was redshirting this year and does a great job for us on the scout team."

"We came through it pretty good," Swinney said. "We had a few guys banged up. You going to play a tough physical game so guys will have some little treatment type things they need to take care of. But we came through the game pretty good."

“Yes, we limited their plays. You have to do a great job on third down. To do that, you have to do that on first down. We had eight three-and-outs. We did an excellent job on first down. That was a big challenge and it was a credit to the guys up front. We have good bodies up there. We're going to need our depth down the stretch. We had several guys who played a lot of snaps. We're doing a good job of developing some depth up front. Most of our depth has had opportunities where they've had to be called upon."

"He's a great player. He's right there. He could play for anybody, anywhere. He'll be a great pro. He's got the right stuff."

The play of Tre Lamar

“That was great. He's a great player. He's a young, true sophomore who has started for us all year. He's just getting better and better. His best football is still in front of him. If you're big and strong and fast and can run, you should have a good game in this game and he did. It was good to see him have that type of production where you're going up against a group who's trying to run it on you a lot. Tre is a big man who can move. And Dorian O'Daniel is such a special talent. He held the point a few times. He's a very physical player who runs like a corner. He reacted very well on some plays."