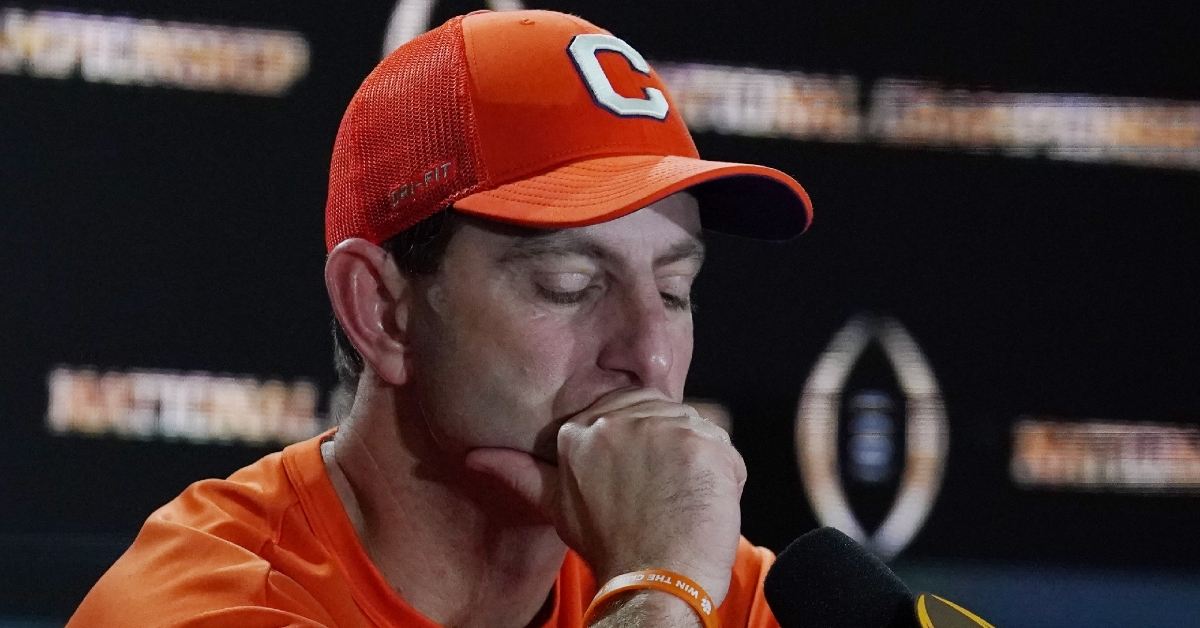 NEW ORLEANS, LA – Clemson head coach Dabo Swinney walked into his locker room after the game and asked for all of the players to look his way. He then told every player and his coach on his team that while this moment is painful, you can’t let one moment define you.

His actions towards quarterback Trevor Lawrence bore that out.

With Clemson scrambling desperately for points late in the loss to LSU, Lawrence scrambled out of the pocket for a nice gain but fumbled the ball away. Lawrence sat on his haunches, dejection clearly etched on his face and then began the slow walk to the sideline.

Swinney met Lawrence on the sideline and told him that his career won’t be defined by one moment.

“I just told him to keep his head up. I told him I loved him and that, hey, listen, you've got -- this is a great opportunity to lead and to respond,” Swinney said. “You know, he's had so much good. We all have. We've had so much just unbelievable success, so many great things, and he's never lost a game. I mean, he's -- and he's not going to lose many. I'll go ahead and tell you that right now. He ain't going to lose many. He's going to be a hard guy to beat forever because he's special. And he had a tough night tonight. For whatever reason, just didn't have his best night.”

Swinney said he loves Lawrence and told his star quarterback that the loss provides him with a chance to come back better than ever.

“I wouldn't trade him for nobody. I love that guy. That's it," said Swinney. "I just told him, hey, keep your head up. You've got a great opportunity here to respond. It's easy when everything is good. So just told him I'm proud of him and appreciated his fight, his grit, his will, and hey, that's ball. Listen, he was giving everything he had, and it was a good play by them knocking it loose.

“We go over there and love on him when he throws touchdown passes, I'm going to love on him when he had a mistake, too, because his effort was tremendous. Again, just didn't have our best night tonight, but man, I love Trevor Lawrence. I wouldn't trade that guy for anybody. And he is special. I know exactly how he'll respond. He'll get right back to work, and we're going to have a really, really good football team next year. We've got tons of guys back, got 15 mid-years there, and this is a bad moment, but even if we'd have won it and it was a great moment, it's still just a moment.”

Swinney said the Tigers will get back to work six weeks from Wednesday.

“The true joy comes in the challenge of trying to go do it, and we'll get back to work on that. Literally I think six weeks from Wednesday we're back on the field, and I look forward to it,” Swinney said. “It stings tonight. Really just -- I don't ever plan to lose. It just stinks. But listen, this is about LSU. I mean, they earned it. Like I said, I'm really happy for Coach O. I've got a lot of respect for him and their players. They earned it. Nobody gave them anything, they went and earned it. So tip your hat to them. This was their night.