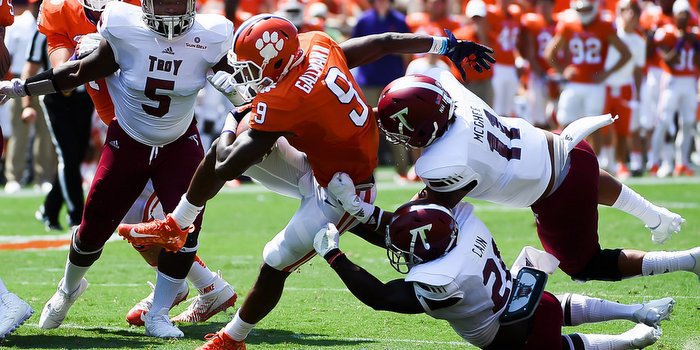 CLEMSON – Football coach Dabo Swinney loves to unwind by playing midweek basketball games in Jervey, and he used a basketball analogy Sunday night when discussing his team’s offensive woes through the first two games of the season.

Clemson has scored 49 total points and hasn’t lived up to its preseason billing as one of the top teams in the country in wins over Auburn and Troy, and Swinney used basketball to illustrate his point on a teleconference with the media Sunday evening.

“It's exactly what I thought I saw during the game. Offensively, it was just a lot of poor execution. I was encouraged with how we finished with three straight scoring drives and making the plays that were there,” Swinney said. “Hopefully that will be good momentum going into this week. Bottom line; we're missing layups and that affects everything. A lot of drops. When you do that at the rate we're doing, it affects your rhythm. We'll get it turned around. Our guys are too good and have too much pride in their performance. We'll get back at it this week.

“As bad as we played offensively, we had 400-and-something yards of offense. We did play a lot of guys. Some of those guys got their first action. Ray-Ray probably had his best day and probably his worst day all on the same day. He had 182 all-purpose yards. He can be a real weapon for us as he gains his confidence. He just has to mature and go through some growing pains.”

“Fifty-five really good minutes of football defensively. We're up 17 points with five minutes to play,” Swinney said. “Next thing you know there is an on-sides kick. We played well, had three interceptions and dominated third down. They were just two of 15 there. We had three or four penalties, too, which allowed them to have great field position on one drive. We also dropped a couple of interceptions.

“Lot of positives on special teams, field goal, coverage and Ray Ray averaged 32 yards and showed some great flashes. Our punt coverage was very good. Biggest disappointment was the first punt return. The ball got over Ray Ray's head. He's just got to stay dialed in on his job and then obviously dropping the ball short of the goal line was an issue. We also had two bad punts.”

Clemson hosts South Carolina St. this weekend and Swinney said the Tigers would have to correct the mistakes if they’re to have the type of season they expect.

“At the end of the day we're 2-0. We're a team right now that isn't playing to its capabilities,” he said. “Too many mistakes. It's on me to get all of that corrected. I'm proud of our guys in finding a way to win. We look forward to seeing if we can't become more consistent with execution. We're going to have to do that. I'm looking forward to practice.”

Swinney was asked if Boulware has a chance to miss the Thursday night contest at Georgia Tech, and he said no.

“I don't think so, not based on what we were told last night and today,” he said. “I don't think so. We think he's going to be okay. Definitely not putting him out there this week despite his wishes.”

Wide receiver Hunter Renfrow was wearing a brace after the game, but Swinney said the former walk-on shouldn’t miss any time.

“He shouldn't miss any time. He came back to finish the game. He has a little area below his thumb area they're going to check tomorrow. It's not something that will keep him out of a game.”

Did the large rotation of players affect the rhythm?

“No. Had nothing to do with the mistakes that we made. Had nothing to do with drops. We had seven or eight drops yesterday. We're not making the layups. We're just not doing the little things, the easy things and it affects everything. We've always played a lot of guys at receiver. We have practiced well, too. That's what has been frustrating. We had an excellent camp, too.”

What went into the decision to use Diondre Overton?

“We were close to holding him. The biggest thing was watching him the last two weeks. The game had slowed down for him. That gave us eight quality guys. He's a very talented guy. He hit a little lull there in camp but the last couple of weeks, watching him respond, he's improved. We just made the decision to play him. He'll get some experience this year that will pay off for him and for us.”

“He played 46 snaps. We wanted to get those other guys in there and get them opportunities. Adam Choice had a couple of snaps down at Auburn, but not many. We wanted to get them in there early and then the game changed a little bit on us. We're not worried about Wayne Gallman. He had a really good fourth quarter. He had three good catches. We know what we've got in Wayne.”

Thoughts on the struggles of Deshaun Watson?

“It's definitely not like him. One of them was 100-percent on Mike Williams. The other one was on Deshaun. He just missed. He's a human being. He's not perfect. Deon Cain ran a decent corner route and Deshaun just left the ball inside a little bit. Sometimes that's all it takes. Their guy made a good play.”