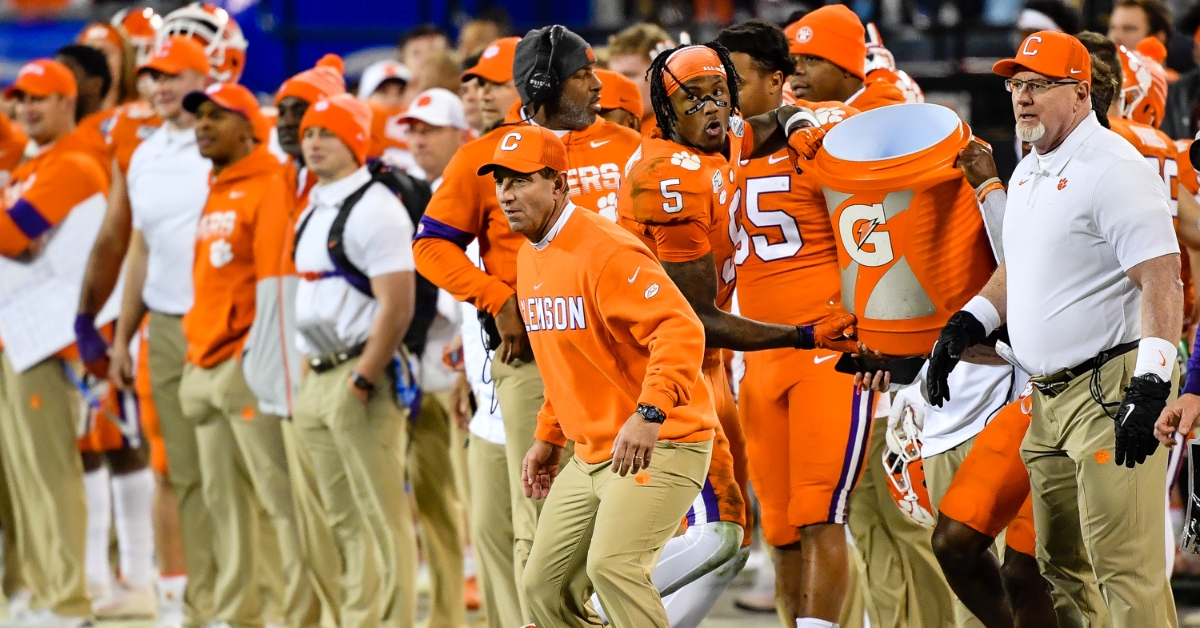 Swinney wants his players to embrace their opportunity.

Different has become normal, and Dabo Swinney wants to use that to his advantage.

The Tigers practiced for two hours inside the Poe Indoor Facility, the last “prep practice” before diving completely into Wake Forest preparation. The Tigers and Demon Deacons kick off at 7:30 pm (ABC) on Sept 12. at Truist Field in Winston-Salem. Clemson is currently a 32.5-point favorite.

There will be no fans in the stands and very limited media, but Swinney wants to keep things as normal as possible – the team will fly up on Friday before away games and will stay in Anderson on the Friday nights before home games. But there will be changes, except for the black-eyed peas. Those are staying.

“We are going to try to keep it as normal as we can for guys. We will travel up on Friday,” Swinney said. “We have all the protocols and communication factors in place. We have to more buses and more space. Obviously, the masks and the shields when we are on the plane. Our protocols we have at the hotel have always been pretty good, but there will be some differences there as far as how we do roommates. A lot of guys will be in single rooms. There will be a few differences, but we will try and keep it as normal as possible.”

Swinney sees the peculiar times as an advantage for a program that prides itself on consistency and depth.

“It seems like it's been a long, long time and these guys are excited to play. We certainly wish the fans could be there, but that's not gonna be an option this week,” Swinney said. “But as I told the team, this will be the most-watched college football season in the history of college football. So what an opportunity we have. We have a great opportunity. And you know what? This pandemic, it can be a competitive advantage or a competitive disadvantage. Just depends on what you are made of and your mindset is. These guys, I am really proud of them and I am looking forward to seeing them play.

“At the end of the day, it's football. But the one thing that will be the same is that scoreboard will be lit up. And there will be millions watching on TV. It will be different but different has become our normal. Everything has been different. And these guys have been able to handle that.”

Another difference is that players who are seniors are given an extra year of eligibility – should they want it – and Swinney says the new rule affects the 2022 high school class.

“There’s some downside to it, mostly for the 2022 high school class,” Swinney said. “That’s an issue for them because the way I understand it right now, it’s just for this senior class. If they come back, they don’t count. Everybody (else) gets their year, but you’ve got to count them in the 85 moving forward.

“So, that is going to be a challenge, and so that could mean that your 2022 class, you’re not going to sign very many people.

“We’ve made some proposals from within our organization that we’ve pushed out to some other people, and hopefully there will be a little bit of relief there. Otherwise, the 2022 class is the one high school class that’s going to be the one that is going to be mostly affected by that.”