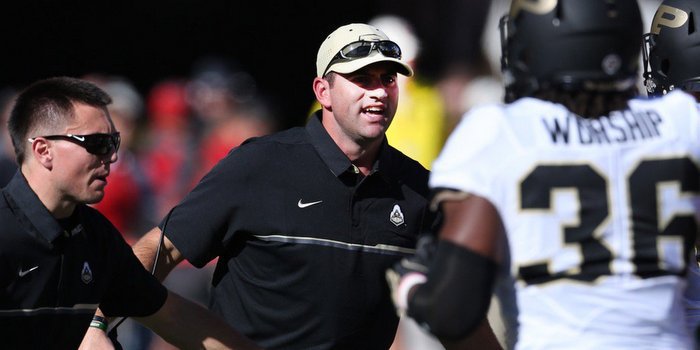 When Dabo Swinney received a text message late last week from Purdue interim head coach Gerad Parker, he felt inclined to respond to someone he thinks could be his kindred spirit.

Parker was named interim head coach for the Boilermakers after head coach Darrell Hazell was let go on Oct. 16th. There are parallels between Parker and Swinney - Swinney was the wide receivers coach at Clemson when Tommy Bowden was let go in October of 2008. The interim tag was removed after the 2008 season. Parker was the wide receivers coach and recruiting coordinator at Purdue before being given the interim job.

“He obviously was put in a unique situation,” Swinney said of Parker Wednesday. “He actually sent me a text message, I guess maybe on Friday. I made a point to watch the game Saturday and then had an opportunity to call him. I can't remember if I called him Sunday or Monday. But I had a chance to call him and visit with him and talk to him about, you know, just my thoughts on their game.”

Purdue lost Parker's first game - the Boilermakers led eighth-ranked and unbeaten Nebraska at the half before losing 27-14. Swinney reached out to Parker Monday, something that Parker addressed during his Tuesday press conference.

"And for him to do that — and I don’t say that for attention, that’s not — and I told the guys that last night. I don’t care, he didn’t know who he was or whatever, but he knows who our team is now," Parker said. "He watched how hard we played, and for him to reach out and do that in a busy time for him, and what he’s going through and spend 26 minutes to talk about the process for what he had to go through and all those things, shows you why Clemson is where they are and why his guys believe in where he’s at. Because they do, and after talking to him for 26 minutes, I can tell you right now, there is no accident."

Swinney said he sees something of his own situation in what Parker is facing.

“I've never met him, but certainly kindred spirits, if you will,” Swinney said. “He's by trade a receiver coach, and we had a great conversation. Just really tried to give him some insight into my experience here and some of the things that I felt like, you know, were necessary and some of the things that you've got to do to give yourself a chance, and to also tell him to enjoy the moment.

“So we talked about a lot of different things. Not going to get into our conversation, but it was a good conversation, a good chat, and I wish those guys nothing but the best.”

Swinney said he did offer some advice, including not focusing on the wins and losses but more about how to improve the program.

“Again, it's a difficult situation, and you know, hopefully they can finish strong, find a way to win some games, but more importantly, one of the things I talked to him about was don't focus on the scoreboard, don't focus on the results,” Swinney said. “Just you've got to change how they think, how they play and you've got to get them to buy into something that's bigger than the scoreboard.

“You know, especially those guys that are on their way out of there, and try to sow some good seeds and build a foundation for what it's going to look like eight years from now or seven years from now, regardless of whether he's the coach there or somebody else is in there. Make the most of this opportunity and feel good about it once you get done. So we talked a lot about a lot of things like that, and some football stuff, as well. But it was a good conversation. Again, never met him, but wish him nothing but the best.”

The parallels to Swinney’s situation in 2008 brought back memories for Swinney.

“So there's just a lot of moving parts and a lot of dynamics and a lot of things that you can't control and things haven't been good and that's why you get put in that situation. Definitely some parallels. And again, I hopefully gave him some good insight and hopefully they can find a way to win a game or two and that those kids can finish on a positive note.”