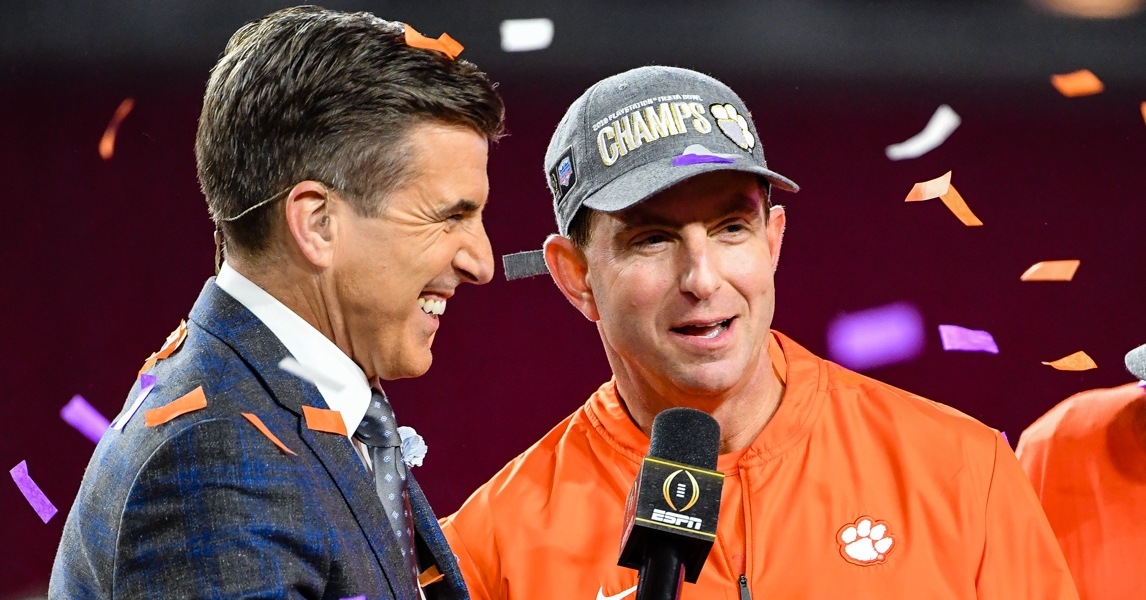 GLENDALE, AZ – Coming back from a 16-point deficit and driving the length of the field with time running off the clock isn’t easy to do during a regular-season game, much less in a College Football Playoff game.

You can do it, however, if winning under tough circumstances is in your DNA.

Clemson's national-best winning streak improved to 29 games in a row thanks to quarterback Trevor Lawrence's game-winning touchdown pass to Travis Etienne and Nolan Turner's game-sealing interception in the end zone as No. 3 seed Clemson rallied to beat No. 2 seed Ohio State 29-23.

It wasn’t easy and it wasn’t always pretty but the Tigers overcame the odds.

“It is just the DNA. It is our program. It's not just this season. That's just how we're built,” head coach Dabo Swinney said. “One of the things I told them at the half, I thought we took their best punch. I don't think we could have played worse, but we took their best punch, and it was 16-14. My message to them at the halftime was: We have to find a way to get the lead in the third quarter, because when we take a lead in the fourth quarter, we finish. I think we're now 100-2 when we take a lead in the fourth quarter, 100-2. So that's not just this year. That's just who we are. It is just what we do. We finish. That's the mindset and the DNA of our program. So that's everything – your off-season, spring practice and how you meet. That's your camp. It is how you practice every week, all of that stuff. It is your staff, the leadership and the development of leadership on your team. It is culture. That's what it is. It was awesome to see.”

Senior linebacker Chad Smith is a perfect example of that DNA – Smith sat for four seasons (one of those a redshirt year) and patiently waited his turn to play. He was named the defensive MVP of the game after posting 12 tackles.

“It is pretty unbelievable. Kind of got to pinch myself. Just being here five years, early enrolled. Just maximizing my opportunities at my time here at Clemson,” Smith said. “The thought of transferring never really hit my mind at all. I love it here. Coach Swinney is a hell of a leader, great guy. Being able to be around these players, my teammates, it's special here at Clemson. To be able to have a night like this tonight, it is pretty surreal. Credit to the other ten guys, the coaching staff, the offense, special teams. I mean, I may have gotten an individual award, but it really was a team award. I wouldn't have been able to make those plays without my teammates.”

Another player that epitomizes that DNA is safety Nolan Turner, who intercepted an Ohio St. pass in the endzone with 37 seconds remaining to seal the victory. Earlier in the fourth quarter Turner gave up a touchdown on a fourth-down play but came back to make the game’s biggest play.

“Listen, you go out there and it is fourth and two, and you give up a play like that. He was a little too far outside, no post help. [Justin] Fields made a great play,” Swinney said. “He was very disappointed in himself and felt like he let the team down. Unfortunately, they were going to score. That's one thing I told him: You gotta keep your head up. You're going to make a winning interception and just have to go to the next play.

“So it was just pretty amazing to watch it all play out. He's been a really good player for us and had a big interception in the Notre Dame last year in the Cotton Bowl. I don't even know if he was a one-star recruit, but he's really, really good. He's a really good player and was going against elite guys out there tonight. That was a huge play. Just happy to see him be able to have that moment and I know his dad is up in heaven smiling down on him. No doubt in my mind. Just really cool.”