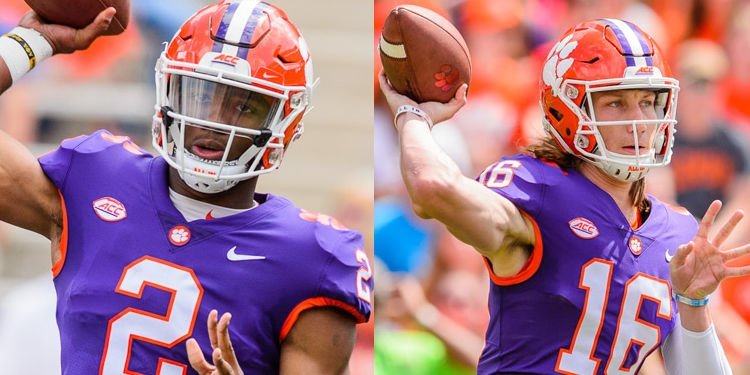 CHARLOTTE, NC – Clemson head coach Dabo Swinney hasn’t been shy when it comes to talking about the Tigers’ quarterback situation, but he took it a step further Thursday when he told ESPN that freshman Trevor Lawrence has to be better than Kelly Bryant in fall camp in order to earn the job.

Practice matters, according to Swinney, and if the two are even then Bryant will retain his hold on the starting spot.

“It’s so funny because I think there is an assumption that practice doesn’t matter. You just roll out there and say you are the guy,” Swinney said while sitting down with Tom Luginbill and Matt Schick. “When you have a quarterback competition that’s why it is called competition. That’s what we do. We create competition. We make it competitive. It’s not always competitive. Sometimes you have a very veteran guy and you have a young guy behind him and it’s just set.

“That’s just kind of where you are, but this is a situation where we have three really, really, talented players that are going to compete. Everybody talks about the quarterback. We really and truly are going to have competition at every position. The most competitive might be kicker. Nobody asked me about the kickers, but they will when we miss one. I promise you that. It’s fun and exciting because we have a guy coming back in Kelly Bryant that is proven. He’s worked his tail off to be even better which is what players do. He has led us to an ACC Championship and to a Playoff. He’s got incredible leadership ability and great respect from his teammates. So, you have that guy and then you have two really talented young players.”

Swinney said redshirt freshman Chase Brice and Lawrence will be given every opportunity to take the job away from Bryant.

“Trevor and Chase that are going to try to go beat him out. That’s the way it is supposed to be,” Swinney said. “I don’t want anybody who says, 'Ok. I’m second team.' No. Go try and beat them out. And that guy that is the starter, I don’t want him sitting there going ‘Yep. I got this. I am the man.’ That’s a terrible mentality. That’s just not how we do things. Everything in our program is you get what you earn. I don’t care who you are. You have to prove every day. I told Deshaun Watson that coming back for his last year- ‘Hey man. What you did last year was great, but you have to prove it again. You don’t get to carry things over.’ So, we went into camp last year with the quarterback situation really close and Kelly separated. He just flat out separated.”

Swinney then pointed out that everything matters when it comes to choosing a starter.

“We grade everything. [Brandon] Streeter does an unbelievable job. We have scrimmages. We have competitive work every single day. We do 7-on-7, team pass good on good. There is a lot that goes into the evaluation and it is not just the physical part of it,” Swinney said. “It’s the mental part of it. There is so much evaluation mentally. Then it is how you respond - it’s what’s your demeanor, it’s your coachability, what’s your maturity, your ability to lead, how do you manage the game, how do you handle adversity. There is a lot that goes into that. But in college football, we don’t have preseason games. So when we play it is for real. So sometimes you can decide things in camp. Sometimes it is close. If it is close then the next step is close. Then you might have a couple of guys play really well or someone will separate. That’s where we are.

“We have three guys we can win with. We have three great human beings that all want to be the guy and are going to compete their tails off. Kelly is going in number one. He has earned that. No one has given him that. I didn’t give Kelly anything. He’s earned it. I’m his biggest fan. I would love to see Kelly [be the starter]. The senior that comes back and takes us to the national championship and win it all. That would be awesome, but he has got to earn that.”

If all things are even, then Bryant starts.

“It’s always been that way in our program. If it is even, then the veteran gets the nod,” he said.

In other words, Lawrence would have to be a cut above Bryant if he wants to win the starting job.

“Yeah, that’s the way it’s been always. When you go back and look I have started a lot of freshmen. Mitch Hyatt started as a true freshman,” Swinney said. “I’ve started a lot of redshirt freshmen. I’ve started a lot of true freshmen. Sammy Watkins came in and won the job on like the third day on campus. But it wasn’t close. So that’s just the way it is, but you have to earn it. The recruiting ranking is not how you earn it. You earn it through your effort, your accountability, doing what’s right, embracing the concept of team and family and performance out on the field. You can’t hide on that practice field. You either can or you can’t. It becomes very obvious.”