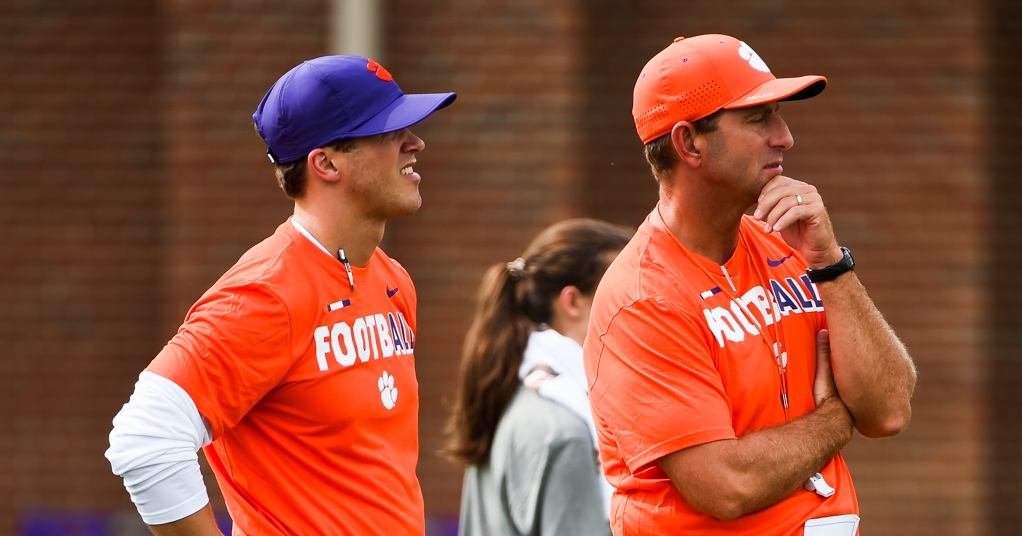 Swinney has known Grisham for a long time.

ATLANTA, GA – Clemson head coach Dabo Swinney first met Tyler Grisham as a young football player attending the Alabama football camp and Swinney was an assistant on the Crimson Tide football staff. It’s a relationship that continued when Grisham played for Swinney at Clemson and will continue with Grisham coaching the wide receivers for the Tigers.

Former wide receivers coach and co-offensive coordinator Jeff Scott was named head coach at South Florida this week, and Swinney wasted no time in offering Grisham the job coaching the wide receivers even though Swinney will step in and focus on his former position group in Scott’s absence.

“I'm kind of excited that he's going to be gone for a little while, I can take them wideouts back. That's my passion,” Swinney said during the College Football Playoff’s media press conference at the College Football Hall of Fame Thursday. “My man Grisham, Tyler Grisham, is so well-prepared. He was a great player for me. Played four years in the pros. He's been back with me for six years. He was a GA for three years, then a player development guy for three years.

“He's been very patient, well prepared for this opportunity. He and I will handle the wideouts until we break, then once we get back from our break, Jeff will be back with us full-time to finish out.”

In a twist of irony, Swinney once signed a cap for Grisham, “To Tyler, a future Tider.”

Instead of Alabama, however, Grisham followed Swinney to Clemson and started attending Clemson’s camps.

Swinney offered Grisham, who jumped at the chance to be a Tiger and Grisham caught 132 passes for 1,390 yards and eight touchdowns during a sterling four-year career. Now, he gets the chance to coach wide receivers under Swinney.

“Well, that's been our plan for a long time. We finally got a chance to execute the plan. It's never not been the plan,” Swinney said. “Tyler has been in line for a receiver job for quite a while. He's had a couple of opportunities to leave, but just stayed. He's done a great job.

“This is the right time. I've literally known Tyler Grisham since the second grade. “I've known him his whole life. He's always been an incredible competitor. He's going to bring a lot of great stuff to that room. He'll put his own personality into it. He'll be a special coach for us.”