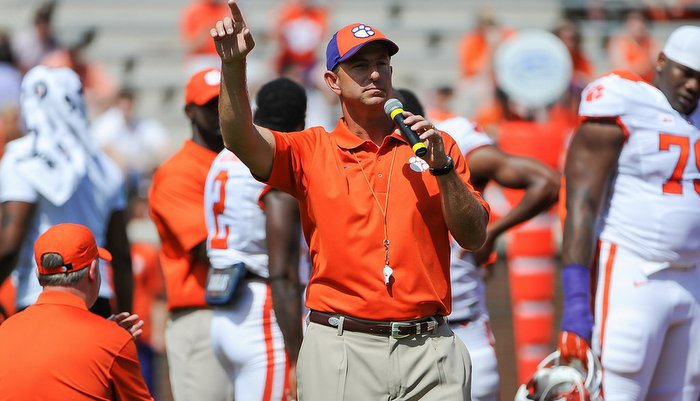 Dabo Swinney
Head Coach
View Full Profile isn't one to back down from an opinion, and he voiced his opinion on the NCAA's full cost of attendance, saying that prospective student-athletes may make college choices based on the wrong reasons.

The NCAA's power five conferences voted in January to allow their 65 schools to offer players scholarships that cover the full cost of attending college, which could amount to a few thousand dollars a year more. Universities annually list a higher actual cost of attending college beyond an athletic scholarship, a number that is based on miscellaneous expenses that differ by school. A 2012 study found that out-of-pocket expenses for a full-scholarship FBS athlete ranged from $1,000 a year to $6,904 a year, depending on the school.

Swinney says the differences in the money allotments cause unintended consequences.

“Oh, there is no question. I mean, it's a nightmare. I just think the intent is good because I think we're finally modernizing the scholarship to reflect 2015,” he said. “There are a lot of positives that are coming about. Even last year, being able to actually feed our guys like we need to be able to feed them. I think that is a positive and they tried the stipend thing and it didn't go through. So basically, this is the way they are getting that done, but there are some unintended consequences.”

Dan Radakovich
Director of Athletics
View Full Profile estimated an annual cost of $925,000 to cover full cost of attendance, based on Clemson’s $3,608 “other expenses” fee for a student to attend school.

Swinney says the topic will be number one on the agenda at coaches meetings.

“There is no question that it's not a level playing field and it is going to be the number one topic at all of the coaches meetings. It's not good,” he said. “I think again, the intent is good, but from one school to be able to pay three or four thousand dollars more than another school, at the end of the day guys are going to make decisions for the wrong reasons and it shouldn't be that way. I don't like where we are right now. We are where we are, but I think that there has to be a better solution somewhere down the road and eventually we will get there. It is where it is right now and it's going to be a factor in the recruiting process, there's no question.”

Swinney said his stance on paying athletes is well known, and that while he thinks strides have been made there is still a lot of work to do.

“I'm well documented as far as my thoughts of professionalizing college athletics. I've also said many times, I'm 100 percent in support of modernizing the scholarship. I think there have been great strides made to that goal over the last year,” Swinney said. “Really good. And, the cost of tuition stipend is a good step in the right direction. Again, we have to figure out a better way to execute it because there are really going to be some negative unintended consequences result from it.

“You have to start somewhere and I know that is going to be a huge part of our discussion when we get together here in a couple of weeks as coaches, as it will be with every coach across the country. You have some issues there from a recruiting standpoint that have to be addressed. The intent is good, but we have to figure out a better way what everybody wants. We are headed in the right direction, but professionalizing it that makes no sense to me. These guys are getting an awful a lot that people don't want to talk about and don't want to put a value on and it's tremendous.”