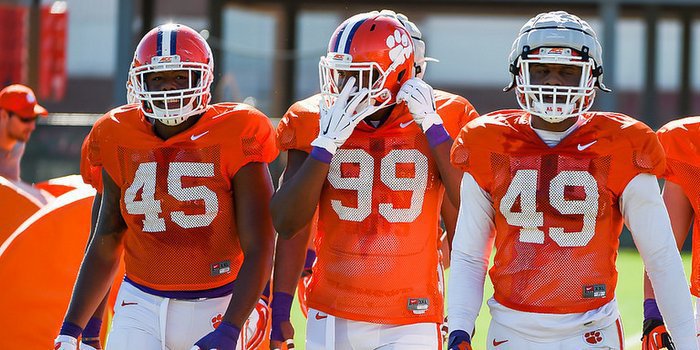 (Left to right) Chris Register, Clelin Ferrell and Richard Yeargin will be counted on in Bryant's absence

CLEMSON – The first major injury of fall camp happened at a position where the Clemson Tigers are thin on experience, but head coach Dabo Swinney says he feels confident there are enough options that sophomore defensive end Austin Bryant’s loss isn’t too much of a blow.

Bryant suffered a small fracture during Monday evening’s practice and could be out for a month. Bryant played in 13 games last year and played 219 snaps. He had 35 tackles, including two tackles for loss. He had his best game against Oklahoma in the College Football Playoff game in the Orange Bowl when he had eight tackles in 63 plays as a substitute for an injured Shaq Lawson.

Tuesday’s practice was the last of the fall camp portion of August workouts, and Swinney said Bryant should be ready to go when he’s cleared at some point in September.

“Just kind of a freaky thing. It was really the same thing he did in high school, but he had a screw put in the bottom part of his toe this morning. So he is going to be out for a few weeks,” Swinney said. “Hopefully, we will have him back sooner than later. We are hoping for the Georgia Tech game that he will be ready to roll, but we will see. (It was) a pretty simple procedure as far as what they did. Like I said, he actually had the exact same thing on the left foot in high school. The screw stays with you for life so now he has two screws in the same spot on both feet. He will be back and ready to go and in the meantime, somebody else will step up. He had a good camp. He got a lot of good work in. So that's a positive. He didn't miss a lot work so he will be ready to roll when he gets back.”

Swinney said the Tigers have flexibility at the end spot, including moving defensive tackle Christian Wilkins to that spot. Wilkins practiced at end during the spring.

(Left to right) Chris Register, Clelin Ferrell and Richard Yeargin will be counted on in Bryant's absence "

“We will look at all those options. I think that has always been a factor for us. That's why we did it this spring. We really needed to have that plan ready, and we needed to get some information to find out. He demonstrated this spring that he could do everything we needed him to do. The good news is we have that flexibility with the guys we have inside. Jabril (Robinson) being at end has been a big plus for us. That's been really good. He's 260. He got sick this spring and summer and lost a little bit of weight. So it really is a better spot for him right now. I think he will end up back inside at some point, but it is a better spot. I'm really proud of Yeargin. He's had a great camp.

“Clelin (Ferrell) has had a great camp. Chris Register, y'all have heard me talk about him many times, probably one of the most improved players on our team. Then Jabril sliding out there has been good with our good depth inside. So Christian has the first part of camp worked mostly at tackle. So he will get a lot more work at end. If our best four is him at end and something else up that's what we will do. The good news is we have time to kind of work through that. I really hate it for Austin. Like I said, he has had a great camp. The two positives are he will be back and number two he did get a lot of good work, so he is prepared and ready to go do what he needs to do when he gets back.”

“Absolutely. It is amazing the development of Richard Yeargin from when he got here he was about 225 or so. He's now 260 and strong and a grinder,” he said. “He's really had an excellent camp. So we are very confident in those guys. But when you lose Austin he was our one experienced guy that has played a lot. He's played a year. That's our big time vet. At least with a guy like Christian in an opener like this the moment will not be too big for him. It gives us a little bit of veteran leadership, if you will, at that position. Because we have that inside with Carlos (Watkins) and (Scott) Pagano and those guys and with Huggy Bear (Albert Huggins) and his improvement. Big Dex (Dexter Lawrence) looks like a senior. He's just a rookie. I think those guys will be ready to go.”

“We are hopeful to get Edmond back on Monday. That's our hope with him. He's had two good weeks. We lost one but hopefully getting one back. “

Is Xavier Kelly ready to play against Auburn?

“I don't know. I would say probably not right now. We are going to try to get him ready. We will see. He's still got a ways to go. Hopefully, we don't have to have him at that moment. Hopefully, he is a guy we can kind of bring along at a good healthy pace until he is ready to roll. He's not quite where those other guys are right now just from an execution standpoint. Too many critical errors and things like that. You know on defense you don't get punt on defense. Two guys screw up, you can still punt on offense. On defense, it is a big play. We worked really hard on just the mental part of it. He's just not quite there yet. Physically he is. He's gifted. Hopefully, everybody else will stay healthy the rest of camp and all that type stuff and we can kind of bring him along. That's our plan is to keep him ready and he is one of those guys we will make a decision at some point.

“That was the purpose of moving Jabril. Jabril is a good football player, but it was hard to get him the reps that he needed. Really to be honest with you, at 260 it was kind of hard to take Dex or Huggy out. So we slid him out, and we have been working him for the last week, and he has done a really good job, a really good job out there. I'm very encouraged. With Jabril, we might not have to push Xavier quite as fast. “

Is this injury at a bad spot?

“We have seen Austin play a lot, so out of these guys he is the guy we have seen the most. We know what we have in him. If Clelin had to miss camp or something like that, it would have been different. Or Yeargin. Those guys need all the work they can get. They have been able to get that. We have a good group. We have options there. We will be fine. Someone will step up.”

Is it unfair to put expectations on Clelin and young guys?

“It's unfair for a guy that hasn't played a snap of real football. I don't think it is unfair from his potential. I don't think that is unfair. I think he has the potential to be a great player. That is why we recruited him. We thought he was an elite prospect, and everything that we have seen has validated that. But whether or not he is going to have an elite career, well there is a lot that has to go into that. But I think he is on his way. Whether or not he will finish like those guys finished, we will see, but he is off to a really good start.”