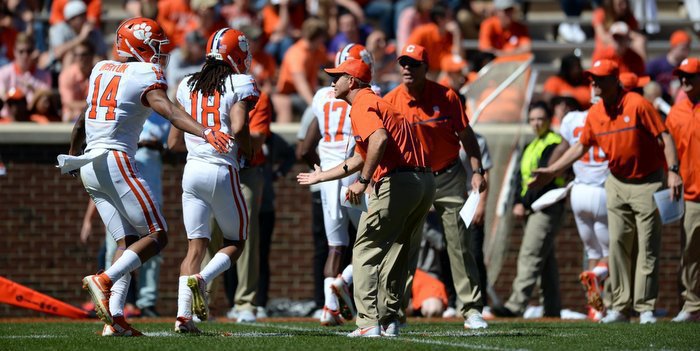 CLEMSON - The defending national champions are a young football team, and head coach Dabo Swinney saw what he wanted to see out of the youngsters during Saturday’s Orange and White Game.

The Orange defeated the White 19-14 in front of spring game-record crowd of 60,000 fans Saturday afternoon, and Swinney told the media the contest was an all-day battle.

“I thought it was a good competitive game. It was about what I expected, especially with how I saw the team divided. I knew there would be a battle all day,” Swinney said. “I appreciate our fans. To give us that type of tool to teach our guys is huge. To see the upper decks open and people up in the upper decks. We’ve got a lot of guys that either played for the first time today or played significantly for the first time today. Saw some good things from the young guys. Saw some good plays. Nobody got hurt. The fact that we went live was good for our defense and everybody involved. Good to see (Greg) Huegel make some kicks. Full speed special teams and we’ll evaluate the tape.”

The game was billed as a showcase for Clemson’s four-way quarterback battle, and Swinney said Kelly Bryant exits the spring as the starter.

“Kelly, if we played today, he’d go be the guy, but we don’t play today,” Swinney said. “We play in September and everything matters. Everything counts. I’m really pleased with the spring that all four of them had. Zerrick (Cooper) and Hunter (Johnson) have both had some really, really good days and they’ve had some inconsistent days. Both of them are really growing and learning every day. Getting 15 days of spring practice. Zerrick, it was his first spring. Hunter has been here for 15 practices. They’re going to take that into the summer and now they’ll get the installation all over again so by the time we get to the fall, if they’ll work, you’ll see the transformation.” 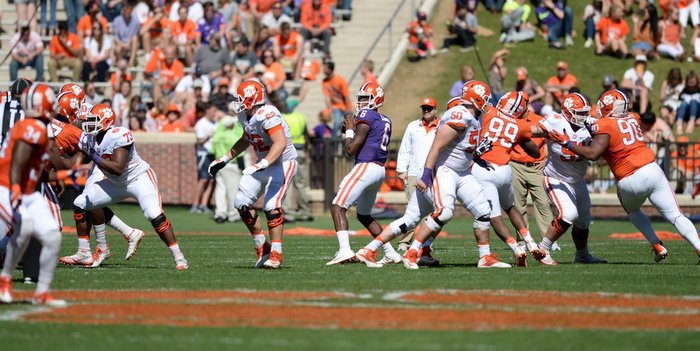 Sophomore Tucker Israel turned in a solid day, completing 13-of-19 passes for 91 yards and a touchdown.

“Tucker, he’s just a gamer. He knows what to do. He knows how to play,” Swinney said. “He doesn’t have some of the tools that those other guys have, but he’s the epitome of what you want. Take what you’ve got and make the best of it. He’s a good football player. All for of them have done a good job, but I’m really pleased with how they’re trying to lead and get good healthy competition. Kelly has done a great job of giving us that veteran leadership there. I look forward to seeing where they are when we get back going in August.”

What does it say about the depth that you could split the team and go live with QB?

“I think it’s a couple of factors. There are only 10 signees that aren’t here. Our football team has been here this spring so we had some numbers. The main thing is it’s not just depth. It’s functional depth. It’s one thing to have depth and a bunch of guys who don’t know what they’re doing. We’ve got a lot of functional players and not a lot of drop off in some areas. I think we’ll be a team that its strength will be in its numbers as we go through the summer and fall. You’ll see guys that nobody is talking about that we know and think are ready to go play. There will be a lot of new faces getting some opportunities to go play in the fall.”

“He's going to be a great football player. He has everything you want. He is going to be ok. We had a couple of snap issues and timing of the motions. He's had a really good spring. He's had a lot on him and to be able to go out there and process everything our quarterbacks are asked to do - for the first time - that is a great, teachable opportunity for him and Zerrick. “

Can you win a championship with the four QBs on your roster?

“Absolutely. That’s why we recruited them. We recruited all four of them and signed them all for a reason. We would never have signed them if we didn’t believe in them. Sometimes some guys might be back up, sometimes guys might be the starter or whatever. We definitely have the ingredients to be a team what has a chance. That’s where we want to be here every year. I just want to be a team that has a chance.”

“We’ve got a bunch of guys that can play. When you split the d-line and the linebackers, I saw a lot of young guys - Nolan Turner, Isaiah Simmons, (Jamie) Skalski, Shaq Smith. These are guys that nobody knows who they are. There are a lot of guys that are going to play football for us this year that not really anybody knows right now. Denzel Johnson, Nyles Pinckney, Jabril (Robinson) is a guy we’re counting on to step up.”