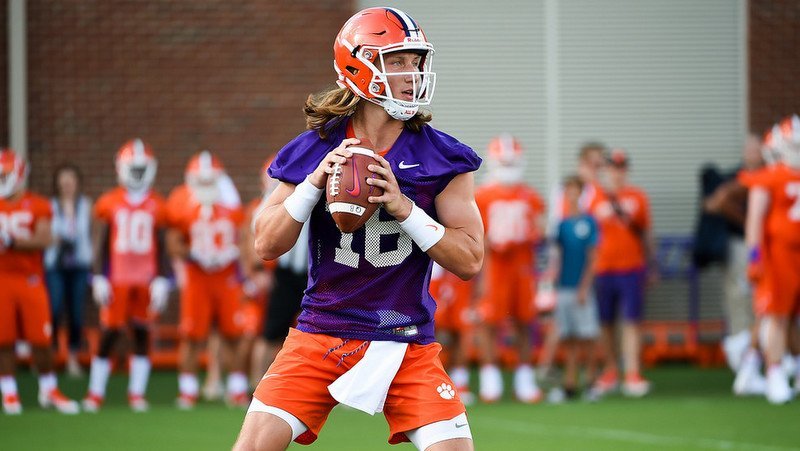 CLEMSON – Clemson head coach Dabo Swinney says the quarterback competition is breeding a sense of urgency on every single play in practice.

Swinney spoke with the media following Monday’s third practice of fall camp, and he smiled when he was asked about the battle at quarterback with Kelly Bryant, Trevor Lawrence, Chase Brice and Ben Batson.

With such a hotly contested competition brewing on the Allen N. Reeves practice fields, Swinney said he’s excited with how things have unfolded through the first three practices.

“Absolutely (it’s a lot of fun of watch). It’s just what I thought there, too,” Swinney said after Monday evening’s practice. “They’re all better. It’s an unbelievable competition. There’s just this sense of urgency on every play and I love that. As a coach, it doesn’t get any better than that. When every single play, there’s this level of intensity at that position. It’s awesome.”

Bryant – the incumbent and starter who led Clemson to it’s third consecutive ACC Championship and College Football Playoff - has had a good start to camp.

“Kelly has had three good days. He had a really good day today and I thought this might have been his best day. It’s early but in three days, he’s done what he’s needed to do,” Swinney said of Bryant. “He’s not making a lot of mistakes. He’s very conscientious. He’s focused on the details. He’s trying to become a better faker. He understands the protections.

“He’s hit a couple of the hots and he’s put the ball down the field where he needs to give us a chance with some of these guys. He’s improved there too, but we’re much better there at wide out than we were this time last year and it’s not even close. There was a lot of coaching going on there last year.”

Lawrence – the former 5-star and fan favorite – has shown much improvement from where he was during spring practice as an early enrollee.

“Trevor is just better in all facets from where he was in the spring. He’s continuing to improve. He’s heavier,” Swinney said of Lawrence.” That’s really helped him. Knowledge wise, - he’s cut down but he’s still making some mistakes but he’s cut way down on those mistakes. He’s still kind of figuring out some things on the type of throws he can make, which is what practice is for.

“He’s a guy that thinks he can make every throw and in high school, he was pretty much able to make all of those throws, whereas the windows are a little tighter, the guys are a little longer, they’re a little more athletic, the can get to the spots a little quicker. He’s figuring that out a little bit. I love where he is - size, strength, improvement, knowledge.”

Brice and Batson may be forgotten amongst the fans, but Swinney said they are both stating their cases each and every day in practice.

“Same thing with Chase. He got some reps with all three groups today and it was good to see him really consistently perform,” he said. “I think he’s had a good couple of days in a row. Ben, he’s got the furthest to go and he’s got a lot on him right now. Those quarterbacks are doing a good job with him. Really pleased with how he’s thrown the ball. He’s just jumped right in there and is holding his own. Those guys have had three good days. We’ve got a long way to go.”

While Clemson’s quarterback competition may be just as intense as the one going at Alabama between Jalen Hurts and Tua Tagovailoa, there isn’t the drama because each player on Clemson’s roster knows exactly where they stand.

“We communicate with our guys all the time. We grade everything. We’re very transparent here. Everybody knows where they stand. That doesn’t mean they always like that, but that comes with the territory,” Swinney said.