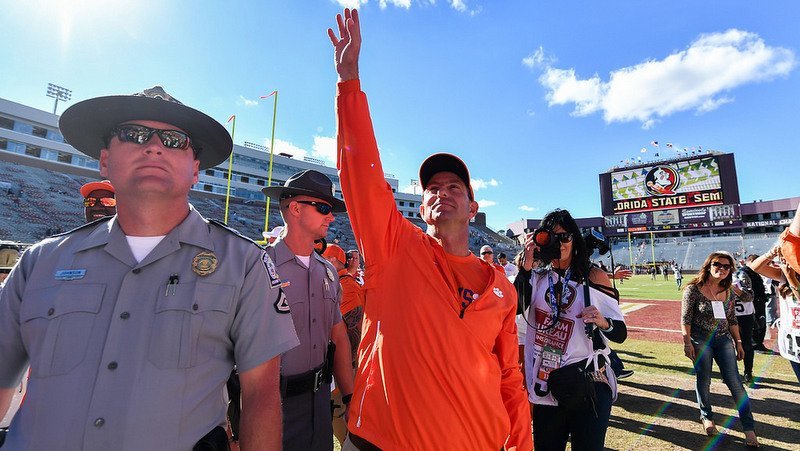 Swinney's Tigers are ranked second in the initial CFP rankings

It didn’t come as a surprise to anyone that Alabama sits atop the initial College Football Playoff rankings that were released Tuesday evening, but Clemson head coach Dabo Swinney thinks the rankings should have Alabama in all of the top spots while the rest of college football rides the R.O.Y. bus.

For Swinney, however, it’s Bama and the R.O.Y. bus.

“The reality of it is, back when I was a player we kind of had the big-time bus and then the R.O.Y. bus – the Rest of Y’all – it is kind of Alabama and the rest of Y’all,” Swinney said. “We are just kind of glad to be on the R.O.Y bus right now and to still have a chance,” Swinney said. “But, it really does not matter. It is exciting to know that we are getting into November and we are still a team that is in the middle of the hunt.

“The race is not over. You have to keep running the race with purpose and focus and great attention to the task at hand and just take them one at a time. Hopefully, when it is all said and done and Y’all get to about that fifth or however many shows that Y’all do, we are still in there, that would be awesome. For us, we want to win our division first. That is what we want to do.”

ESPN host Rece Davis interrupted to say that the Tigers are in the front buses with Alabama, but Swinney just laughed and said, “Alabama is on buses 1,2 and 3, and we are on the R.O.Y.s – the Rest of Y’all. We are in that group. The Rest of Y’all.”

Davis asked Swinney what difference freshman quarterback Trevor Lawrence has made, and Swinney said the Tigers are about more than Lawrence.

“We are just a more complete team around Trevor, but he has really done an unbelievable job and I’m excited to see where he goes. “I think that we are a team that is getting better. We are playing with some confidence. We are developing some depth. We are excited about just the fact we are 8-0 at this point and we are still a team that has a chance.”

For the Tigers to stay in the rankings – and perhaps move up from the R.O.Y. bus – the Tigers have to take care of business each week. He then added that the Tigers are in the championship phase of the season.

“But, in order to have a chance in late November and December, you have to take care of the task at hand so for us that is Louisville this weekend and just trying to continue to improve our team,” Swinney said. “It's just the part of the season we are in. Every year we break down our season into three phases, and November 1st every year this is what we call the championship phase.

"We try to get ready and we try to transform in the summer and then we get into primetime, and now we are in the fourth quarter of our season and this is when we want to be at our best, and I think we are a team that is getting better and playing with some confidence.”