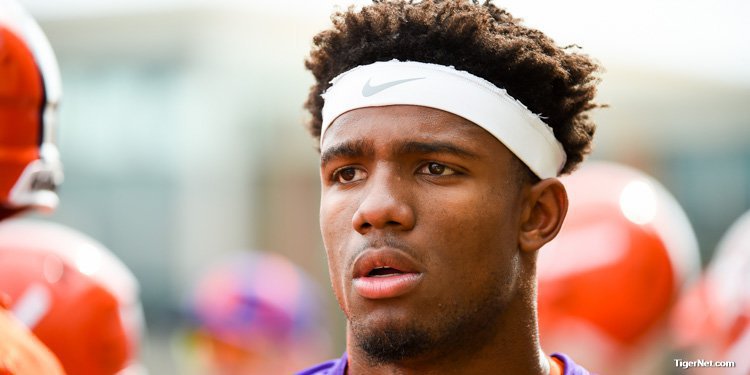 Kelly was hurt late in the third quarter Saturday

CLEMSON – Clemson quarterback Kelly Bryant practiced with the team all week and is “ready to roll” according to head coach Dabo Swinney.

The junior quarterback sprained his ankle late in the third quarter of Saturday’s 28-14 victory over Wake Forest and was in a walking boot after the game. However, Swinney said that Bryant has responded to treatment.

“He’s practiced all week. Ready to roll. Nothing’s changed. Ready to go,” Swinney said after Wednesday’s practice, the final one before Friday’s game at Syracuse. “The only one that is going to be out is Jalen Williams. He sprained the AC joint in his shoulder. We are going to hold him this week. We were hoping he would be able to go, but it’s still a little sore on him.”

Swinney said Bryant was lucky the sprain was on the lower part of his ankle and not a high ankle sprain.

“Absolutely. It wasn’t a high ankle sprain at all. He has responded good,” Swinney said.

The coaches will likely use the open date to make a decision on tight end Garrett Williams, who tore his ACL in the spring.

“We talked about a couple of different scenarios and we’re going to talk about it a little bit more, but he did practice all week with the scout team,” Swinney said. “That was our plan this week to really cut him loose full-speed. He did a good job.”

The coaches have also been working with linebacker Jamie Skalski on kickoff – Skalski kicked off once against the Demon Deacons. 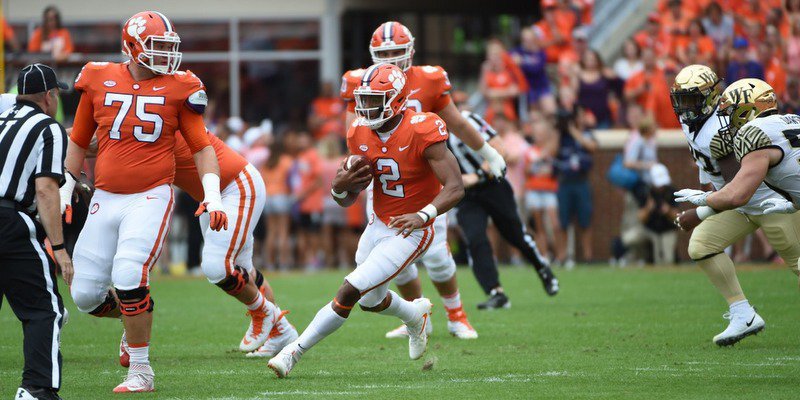 Kelly was hurt late in the third quarter Saturday "

“We’ve been working him every day. Alex (Spence) has been doing a nice job kicking for us,” Swinney said. “He did it in high school and he’s really pretty good and doesn’t work at it a whole lot. We’ve just gotten him back in the groove and working with it. It’s definitely something we could do again at some point. It would be like playing with 12. It would be like a linebacker playing behind that d-line, fitting the gap.”

Another player on the injured list is defensive end Richard Yeargin, who hurt his neck in a car accident over the summer and will miss this season.

“He’s great. I don’t know if y’all have seen him walking around, but he looks great,” Swinney said. “He’s running and working out. He’s pretty much doing everything. He really responded well to the treatment and everything he’s going through healing wise. He’s doing really good.”

“You want to get stops. Hopefully, they’re hurrying up and putting our offense back on the field. That frustrates a tempo offense more than anything when they can’t get into a rhythm. Now you’re playing really fast to punt, that would be a great thing. If they’re going to play fast, we have to play fast. We have to match the precision, match the intensity, match the alignment, match the communication. Everything is just kind of ramped up. Just do your job. Tempo really shouldn’t affect that if we’re locked in. Brent (Venables) gets the call in and is making sure everybody is ready to go and get it communicated what personnel is in the game.

“Do they sub or not? That kind of changes things a little bit. Whether it’s a tempo offense or any offense, you want a three-and-out and you don’t want to allow any rhythm. You don’t want to allow them to get any type of balance with what they’re doing. You want to keep them off balance. You want to control the line of scrimmage. You want to stop any type of run game. Don’t let that exist. That’s our goal every week, regardless of up-tempo or not. The challenge with this type of offense is everything is ramped up - your sense of urgency from signal, alignment, communication up top to the sideline Everything is a lot faster.”

On getting the best shot of every team they play

"Whether we’re here or on the road, we’re going to get everybody’s best shot. That’s just the nature of where we are and I love that. That’s a comfort zone for me because to me it’s easier to prepare your football team when you know you’re going to get the very best of every team you play. I’d much rather have that. That’s just where we are and that’s why it makes it easier to get these guys to just focus on Clemson and not who we’re playing, that’s a given. We’re going to get maximum juice from the opponent, so let’s focus on us, our preparation, our focus, how we play, getting our mind right and just being great this week. From week to week that’s what we try to put our emphasis on. That helps our process."