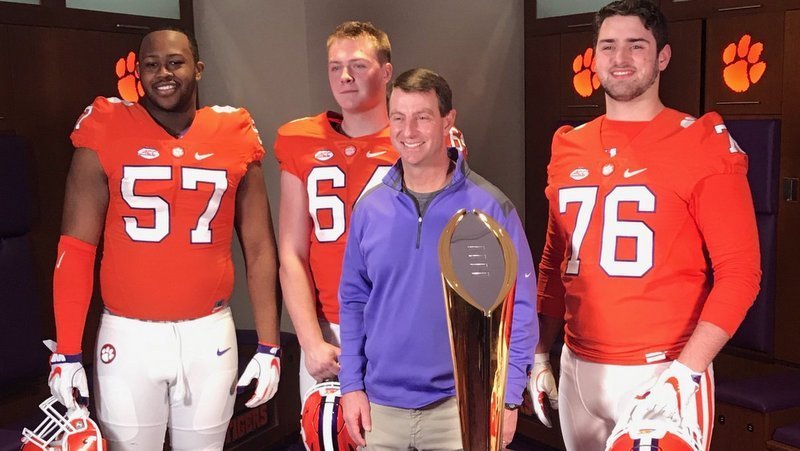 Swinney poses with so me of the 2020 signees.

CLEMSON – The two major recruiting services didn’t give Clemson head coach Dabo Swinney his top-ranked class, but Swinney still loves the 23 players the Tigers signed and thinks that in four years this class will prove to be one of the best.

Swinney held a National Signing Day press conference Wednesday to discuss the 2020 recruiting class, which was in the books during the December early signing period.

“We signed our class in December, but it's still a fun day to re-celebrate this group of amazing young people that are coming to Clemson,” Swinney said. “A lot of them are already here. We signed 23 of them in December and 15 of them are mid-years and they are off to a great start. It's a lot of fun knowing those guys are here and will be a part of spring practice.

“They are kind of getting everything down right now and they are eager and they are learning. So you spend all of this time recruiting them and now you get to start coaching them, so that part has been real exciting. We will end up adding three or four walk-on guys between now and the summer. “

Clemson fell behind Georgia and Alabama in the 247Sports Composite rankings to No. 3 (No. 2 in their own rankings), while Rivals has Clemson at No. 2 behind Georgia. ESPN still had Clemson in the top spot as of 3 pm, but also said that ranking was subject to change.

Swinney said the rankings are based on potential and sometimes the coaches don’t always agree with the recruiting gurus.

“Just a really good group and as I always say, time will tell. Everybody wants to put rankings on these classes coming out of high school,” Swinney said. “That is all based on potential and what people think they can do and as we all know is a developmental game. It's a very subjective process influenced by many factors. So, we try to stay focused on the things we look for, and sometimes that matches up with what everybody else thinks and sometimes it doesn't. But at the end of the day, I think this is a really good class that over time will prove to be a special group. We all think they are a special group right now, but over time you have to prove that.

“That is why I always say you should rank the classes four years later because it's about performance and it's about graduation and it's about development and all those things. If you sign the 15th class today, just be excited about the class you've got and the guys you got to come to play for you. You have to go prove and earn that stuff over the course of time. But I love this group and I do think they will prove to be one of the best groups we've had and allow us to continue to be one of the most consistent programs in the country on and off the field.”

Swinney said the Tigers filled needs on both sides of the ball.

“These are a bunch of really good students that are coming in here and you people that are driven to be excellent in everything that they do,” he said. “In recruiting, it's always critical to fill your needs and I think we've done that for sure with this class. It's always hard to walk away from other great players - that's the hard part - because there are some really great players that could have come to Clemson but we try to recruit to a number and fill our needs and we were able to do that with our 23 guys.

“I always say recruit people first and players second, and I think we have a bunch of great young people that just happen to be great football players and that is what I am excited about. Last year's class, we had 14 states represented, and this year we have 12 states and Canada. Tony and Grish went up to Canada last week and that is really cool for me, just where our brand is and that we can go out to California and get a great player go to Texas and get a great player and go to Connecticut or Canada or wherever, it's just really cool.”