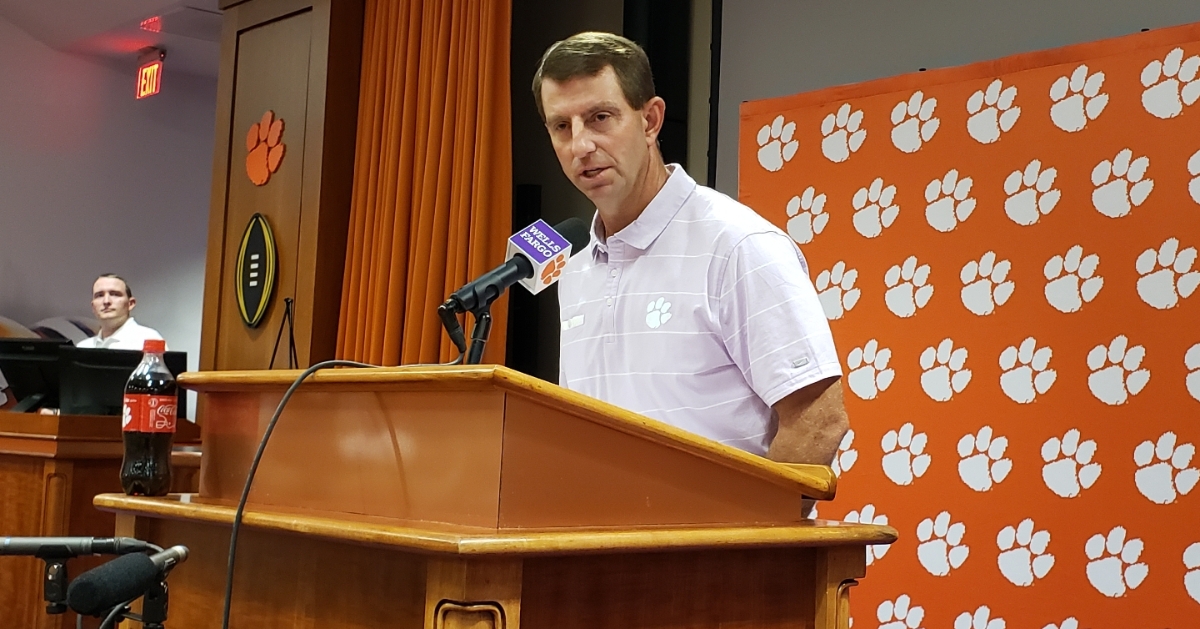 CLEMSON – The 2018 Clemson football team went 15-0 and steamrolled its competition on the way to the school’s third national title. Head coach Dabo Swinney feels like his 2019 team is ahead of that team.

The top-ranked Tigers take on Charlotte at 7:30 p.m. Saturday in a game broadcast by the ACC Network.

"Excited to be back in Death Valley this week. I really appreciate our fans for such amazing support. We're going to have another sellout. I see a lot of empty stadiums in college football but not here,” Swinney said during his Tuesday press conference. "I'm proud of our team. We've opened with three-straight Power 5 opponents. We have been challenged but we have found a way to get to 3-0. So a good start. We are progressing.

"Charlotte is going to challenge us. I'll tell you what, this team will challenge us on offense. They put 41 points up on App. State. I'm impressed with how well-coached they are. A great scheme. It's probably the biggest challenge for our defense schematically. They create extra gaps, play action. They know what they're doing. This is is the best rushing team we have seen in three games. Their ability to run the ball and how they are coordinated to run the ball, it is the best team we've seen in three games.”

Swinney said the 49ers are better than people might think.

“This is a team that could embarrass us if we do not have a great week of preparation,” he said. “They play with great energy and a great spirit. They're physical. Their running back is tough, thick. We have to do a nice job. We need to win some matchups outside. Their quarterback is a heck of a player and he's a runner, too. They run him a lot. They can split your defense with misdirection. Their receivers are skilled and have made a lot of one-on-one plays. This is a really well-coached, well-coordinated offense that can cause us a lot of problems.

"Flip over to the other side and they are fifth in the country in sacks. They have the best player that we have seen to this point in No. 5 (Alex Highsmith). He's on all of the great player lists. I keep watching him and he looks like Xavier Thomas. He's physical, fast and disruptive. He's causing sacks and tips. He's really, really good. Both of their ends are. No. 5 could play for anybody in the country. This is a team that will not be overwhelmed.”

The Tigers are 3-0 this season.

"We start the second quarter of our season this week,” Swinney said. “We have to get better and become more consistent. We have been explosive but we need to be more efficient. We have a lot we can now apply and we need to take that next step. I know we can be that complete team. I love the leadership and effort of this team."

Swinney said the Tigers are ahead of the team that went 15-0 last season.

“There is no question. It is not even close after three games to be honest with you,” Swinney said. “We have been challenged more. We have played three Power 5 teams - last year we had played Furman and Texas A&M and Georgia Southern and that was a different type of deal. We were giving up big plays and we were very inconsistent defensively. And then offensively, I didn't think we quite had that killer instinct yet, and we were a work in progress. Justyn Ross was a true freshman and Trevor (Lawrence) was coming on and we were trying to figure everything out. We were further along than we are right now as an offense.

“We are just way ahead. After three games, we have more yards and are averaging more points than at any time in the history of Clemson football. And we haven't really played great. There is so much out there. There is no question - in all phases we are further along. Now, the question is will this team improve like that team? That team stayed focused and got better and better and they never got distracted and were hungry and had a relentless will to win. We will see. But after three games, it's not even close. I like the discipline and the consistency that we have.”