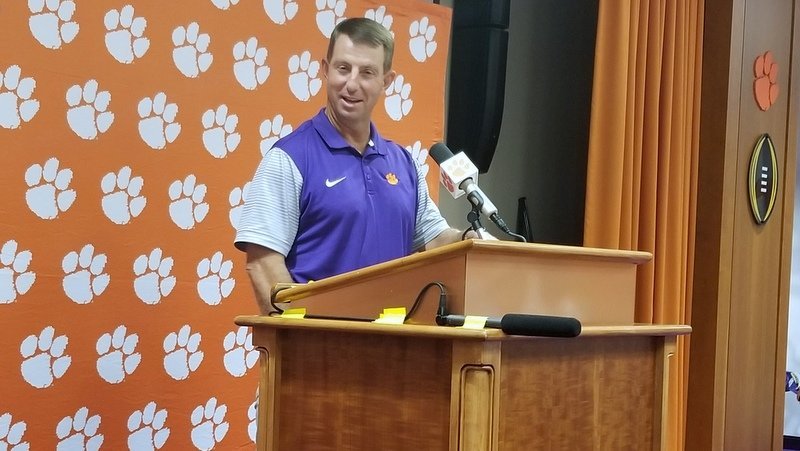 Swinney speaks to the media Tuesday

Second-ranked Clemson heads to College Station to take on the Aggies at 7 pm Saturday and is currently listed as a 13-point favorite. Swinney says the unknown makes the game similar to a season opener.

“We've got a huge challenge this week. This is like another opener. We just don't know a lot about Texas A&M. I think the unknown is a competitive advantage for them,” Swinney said. “Hopefully, our experience can be a competitive advantage for us. This is a difficult game to prepare for us. I'm watching Notre Dame, Florida State, Wake Forest and all of these difficult schools, but you don't have much to watch on the actual people. We don't have a lot of video evidence against these guys. It truly is like another opener. Huge challenge. Really impressed with Texas A&M watching them last week. Even though their schemes were different watching film of their personnel from last year, athletically who they are.”

The Aggies held Northwestern St. to 251 yards of total offense last Thursday in the season opener.

“Defensively, they are stout. They've got some big dudes up front. That No. 34 (Daylon Mack), he's an earth mover. No. 8 (Kingsley Keke) is a very good player. No. 46 (Landis Durham) led the SEC in sacks last year. Very talented. They got a lot of guys back on defense that started at different times last year. Very good in the secondary. Their safeties are as good as we're probably going to see. These are really, really talented players at safety. I'd say all four of their starters in the secondary are probably going to play in the secondary. It's pretty easy to see that.

“Impressed with them up front and that's where it all starts. Their d-coordinator came from Notre Dame and he was at Wake Forest. I was really, really happy when he left and went to Notre Dame because he was one of the best that we saw year in and year out. He does a great job schematically, especially coaching those guys up in the secondary. I think they do as good a job as anybody at route reading and diagnosing the play. It should be a challenge to figure out what their plan is going to be and making the right adjustments to give our guys a chance to be successful.”

Offensively, the Aggies put up 758 yards of total offense, 503 which came via the rush.

“Offensively, very impressed with their quarterback (Kellen Mond). The more I watched of him, really impressive athlete,” Swinney said. “He actually came to camp one summer. He's incredibly athletic and he's got a lot of moxie. He won me over when I watched him run the read option and he pitches the ball and then he's 20 yards down the field leading the way blocking. He's gritty. It's very easy to see how he's won his team and has become a leader for them. Made some big-time throws. No. 81 (Jace Sternberger) transferred in there and he fits the mold of what Jimbo has always had in the past at tight end. They rushed for 500 yards. I know the team didn't match up with them well but it's hard to rush for 500 yards, I don't care who you play.”

Swinney said the Aggies would be a big challenge.

“This is a complete football team we're about to play. I've got a lot of respect for Jimbo. He's a heck of a football coach,” he said. “He'll have his guys ready. New energy, new chemistry, new schemes on both sides of the ball. Big challenge but something we're really looking forward to. What I'm looking for is for our team to go on the road and stay focused and display our experience that we have and adjust to the adversity that's going to be within the game. It's early in the season. This is a huge game for both teams. There will be a ton of energy. It's Game Day. I want to see our team embrace that and win or lose, this is the type of game that I think makes you better and gives you a chance to get better as you go through the season. It's exciting to be in these games and really looking forward to it.”

Clemson’s last trip to Texas A&M ended with a 27-6 Aggie victory. Swinney was in his second season on the Clemson staff and remembers it as a “butt whipping.”

“I was a part of that butt whipping we took in 2004. We couldn't get home soon enough. We got destroyed out there. I remember all too well,” Swinney said. “That's the only time I've ever been in Texas for a football game as a player or coach. I remember that was my second year here and we flew out there. It seemed like we stayed an hour and a half away. We were a long way away. Back in those days we wore our warmups. We got on the bus and there was no air conditioning. I remember vividly getting off the bus and everybody had their pants pulled up and their shirts off. We looked like North Dallas 40 getting off the bus. We were a bad looking bunch and everybody was sweating. In my mind, I remember going, 'This is fixing to be a long day,' and it was. They absolutely kicked our tails all over the field that night.”