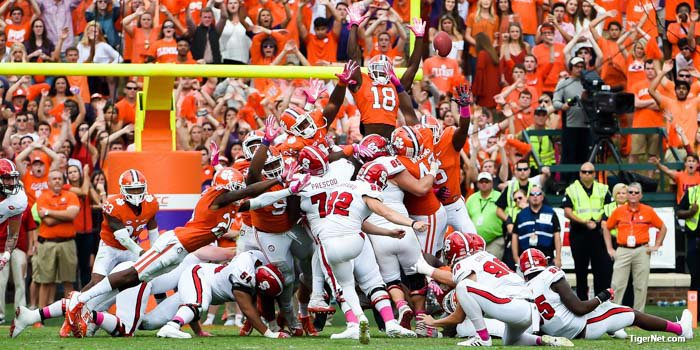 No. 5 Clemson travels to N.C. State Saturday (3:30 p.m., ABC) for what amounts to an elimination game in the ACC Atlantic Division, and for Clemson, another loss likely means elimination from the Playoff.

"You have two teams that are well positioned to win the division. It's exciting to be a part of this kind of game. This is playoff football,” Swinney said during his Tuesday press conference. “It'll be a big challenge for us. I'm very impressed with N.C. State. They've got 21 starters back and 19 of them are graduates, seniors or red-shirt juniors. That's very rare in college football. Experienced, well-coached team. The two losses they had, there were just critical mistakes and errors. But they're capable of playing with anybody.

"They're physical in the trenches on both sides. It's the best defensive line we've played. All four guys are NFL guys. They play about eight guys there. They're very active at backer, play downhill. Offensively up front every single one of those hogs are back. They create distortion in your defensive line. They do a great job of presentation. Very seldom do they just line up and run a play. There's always some motion or sh 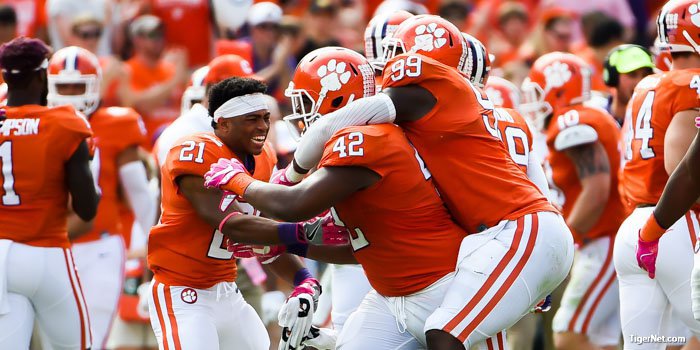 He was asked about the Tigers’ mindset in practice this week and he didn’t hesitate with his answer.

"Prepare with purpose. When you do that, you have attention to details,” Swinney said. “Bring effort, pay attention to alignment, eyes, footwork, everything. It's your commitment. You can't get outworked. They want it as bad as we do. It comes down to execution. Both teams have played eight games, so you're not going to trick each other. It'll be just one team representing this division in the championship game. That's what it's all about. You hope to be in this situation in November.

"It's the biggest game of the year. It is. If we hadn't have won last week, this game wouldn't be as big. It just kind of ramps up as you go through November. As a team you have 12 opportunities. Right now we can still be 11-1. You have to win eight first and that's what we're trying to do. If you lose, most likely you're not going to win the division. You want to win it every single year and stay in the hunt as long as you can. The season won't be over regardless. If we're not good enough to win, you tip your hat, shake their hand and go forward to try to be as good as you can. We don't sit around worrying about what-if. We just want a great Tuesday practice today."

"They have a bunch of good skill on offense. They're big, strong and can play. No. 7 (Nyheim Hines) is special. He is electric. (Reggie) Gallaspy, he's downhill. Very solid,” Swinney said. “He runs hard, tough. No. 1 (Jaylen Samuels), he's one of the best players who has come through this conference. He's all-around, instinctive and versatile. He does it all. No. 7 (Hines) is a return man as well. He took one to the house on us up there a couple of years ago. They only have four turnovers all year, so they've taken care of the ball. Their QB can make all the throws. He throws a nice deep ball. They have a million screens. I think they've had 51 screens. You have to defeat blocks, so it comes down to matchups. They're very physical in the running game. They're averaging 36 runs and passes per game. Just a good team all the way around. I think we've got a good team. Should be a heck of a game in Raleigh."

Swinney said Samuels presents a problem for the defense and is hard to prepare for.

“It's hard. They're just very creative with him,” he said. “They're not coming out of a game without him touching the ball a lot. If they put him at tailback, they will. They'll motion him all over the place. You won't take his touches away. You have to know where he is and understand how they're using him. A lot of preparation and studying to get ready to defend him. He's great in space. He's strong, he breaks tackles and is about 220 pounds. He's great after the catch."

"He just got hurt at Syracuse. He hurt the arch in his foot. He's had a hard time planting and cutting, but he's pushing through it. Hopefully he'll be back this week. No decision yet."

"He hit something in his hand, broke some bone in his hand. It happened early in the game. A helmet hit it. Danny Poole came to me and told me that they were going to cast him up. Next thing I know he's out there with a big club on his hand. The cast isn't big but the padding is enormous."

“He’s still coming but not quite ready. We cut him loose last week. He was in green. My heart breaks for him. He wants to play so bad. You have to be able to play to a high level. Your feet and change of direction is everything at that position. He is still not quite there. He'd almost been better off to break a bone in his foot. A mid-foot sprain can linger. He's getting better. At some point I think he'll be back."

Do you expect Dexter Lawrence to play this week?

"He has competed his tail off. That's why he was out there first. They actually brought me the pregame stats. All of them except one was 6-for-6. We started over and ran him out there. We gave them all the same kicks. He came out on top. He didn't win the job for life. He won it for the week. That's where we are. It's a week-to-week basis. Kinda like me ... lose a couple of games and they'll run you off.

"I was so happy for Alex the other night. He's got talent. He can kick it. It just wasn't showing up for him. Then of all things he's got to kick the ball with a high snap in a monsoon. Bless his heart. But he did a good job. And he needed it. We all needed it. He had put in a great couple of weeks of practice. He finished up strong. It was good to see him go have some success. He just needs to build some consistency in that. Either it goes through the pipes or it doesn't. It's a tough position to play. I was very happy for him. Hopefully that's a good boost of momentum for him. We'll keep charting, though. Everyday. Every week. We'll keep creating that pressure in practice the best we can."

What impact will not being in the top four Tuesday night matter to him?