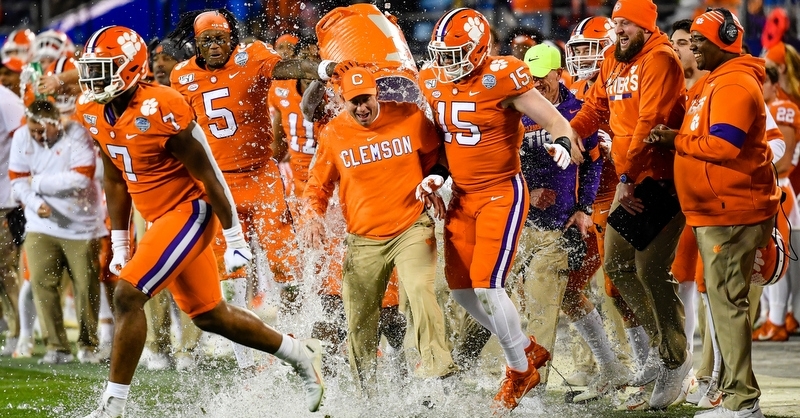 Swinney gets a Gatorade bath at the end of the game Saturday.

CHARLOTTE, NC – Clemson head coach Dabo Swinney left the ACC Network set after Saturday’s dominating win over Virginia in the ACC Championship Game and jogged towards the Clemson locker. A handful of Tiger faithful was waiting on Swinney, and as he got close the group started to cheer and clap.

Swinney never broke stride, doffed his cap to the crowd and broke into his biggest grin of the night, and shouted, “Woooo!!! Let’s go!!!”

The fans laughed in delight as the Tigers’ head coach ducked into the tunnel. Watching Swinney, it’s obvious that winning championships never gets old.

“At the end of the day, what this team -- what our team has done is super special. It's really hard to do what they've done, 13-0 and to stay focused week in and week out and just continue to get ready is special,” Swinney said. “The leadership of this team, the will to win is inspiring, really, and I'm just so thankful to have the opportunity to be a part of it. This never gets old. This is what it's all about, and just a special, special time. This team has prepared, they've trained, and they've believed all year for this moment. So to see it come to fruition is pretty special. To win our fifth ACC title game in a row and make college football history is really cool, and not something we set out to do, it's just something that's happened. We've just kind of been so busy trying to just be our best day in and day out and just all of a sudden you look up and we're in a situation like this.

“I'm thankful for those previous teams that gave us this opportunity, and it's just a blessing. Hopefully we'll have an opportunity to go compete and see if we're good enough to get to the top of the mountain for the whole thing. We'll find out tomorrow. But these seniors won their 54th game today, and that's one off the college football record. So just an incredible, special group of young people.”

The Tigers will now move into the College Football Playoff, but Swinney said he will enjoy the ACC Championship as long as he can.

“Just a great, great night. Appreciate our fans. It was an amazing crowd, and appreciate everybody in Charlotte that works so hard to make this ACC Championship game a great venue and a great experience for both teams,” Swinney said. “It was just awesome, and I'm just happy for our fans. I'm happy for our administration, and I'm happy for Team 124, our 124th team at Clemson. These guys have done some great stuff. We're going to enjoy it tonight. We've got a team meeting tomorrow and we'll celebrate as a team at noon and find out who we're going to play, where we're going, and then these guys will get a little time off. We're going to hit the road. We've got a very short window because everything is back a week this year calendar wise, but we're looking forward to the next challenge. But we'll enjoy this one tonight.”

Swinney was asked where he thinks the Tigers will land – as far as seeding – in the playoff and he said he didn’t care. All he knows is his team deserves a chance to play for a title.

“Oh, shoot, man, I have no idea. And really don't care. I mean, just as long as we can be somewhere in the top four, I think we deserve that. We've earned that. I know we haven't played anybody all year, but hopefully we can get a chance to be somewhere in the top four because I think these guys, they deserve that,” Swinney said. “But it's hard. It's hard to be undefeated in any league. Ohio State and LSU, I mean, unbelievable, unbelievable years because it is so hard. I have such a great appreciation for that accomplishment. LSU has been an unbelievable team. I would imagine they'd be one. I think they won pretty big, didn't they?

“I didn't see the end of it, but they were winning pretty big. What was the Ohio State score? Was it close? So pretty close game. I don't know. I don't even know who was No. 1 last week to be honest with you. But I would think one of them would be No. 1. We'll be in there somewhere. I would think we'd probably be three again. It doesn't really matter. We'll play somewhere and play somebody and be thankful for the opportunity. Let's see who else? I guess Oklahoma. They won, didn't they? I guess that's it. I guess there's no drama. There you go. Them ol' boys can sleep in tomorrow, sleep until noon. There it is. There's your show.”