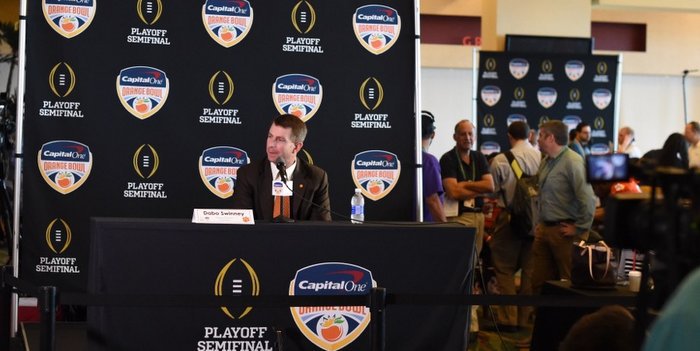 Swinney talks to the media at the Orange Bowl

Wide receiver Deon Cain, kicker Ammon Lakip and tight end Jay Jay McCullough won’t play in the game, and Swinney said that the Clemson careers of McCullough and Lakip are over. Both have faced suspensions recently – McCullough missed time at the end of last season and time this spring, while Lakip missed the first three games this season.

“If you don’t do the right things there are consequences,” Swinney said in final Orange Bowl Press Conference early Wednesday morning. “It’s simple. It’s not a complicated matter at all. We have 115 guys, and 112 did the right thing, and three didn’t do the right thing. Now they don’t have the opportunity, and they forego the privilege to be a part of the game. I hate it for them. They are the ones that have to deal with the consequences, and they are missing out on a great opportunity. There is not much to add other than I am proud of our team and how they have handled themselves. Unfortunately, three guys get the headlines.”

Swinney said the loss of Cain isn’t as bad as people think.

Swinney said Cain will have the opportunity to come back and be a part of the football program, but McCullough and Lakip have seen their Clemson careers end.

“Deon can come back and if he does the right things he can be a part of the football program,” he said. “Ammon is a senior, and he will move on, and Jay Jay is a redshirt junior but he will have the chance to come back to school next week and graduate in the summer, and then he will move on. If he wants to play somewhere else next year that’s up to him.”

The freshman Cain emerged as one of Clemson’s top deep threats this season and had 34 receptions for 582 yards and five touchdowns in 310 snaps over 12 games. Cain’s five touchdown receptions are good for second on the team, and he is tops on the team with 17.1 yards per reception average.

He had two catches for 12 yards against North Carolina in the ACC Championship Game.

Swinney said he would always strive to do the right thing.