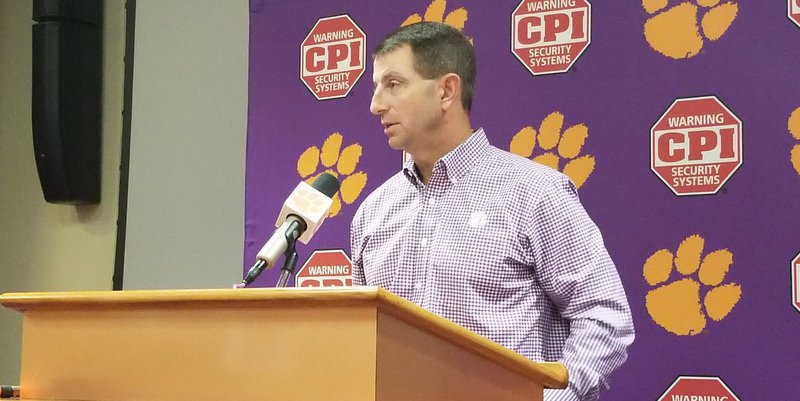 No. 2 Clemson plays at Syracuse Friday night in a 7 p.m. kickoff. Clemson defeated the Orange 37-27 two years ago in a tighter game than many envisioned.

“They embarrassed us. They embarrassed us on defense. We couldn't stop them,” Swinney said. “They brought in that quarterback. They had a couple of guys get hurt. We jumped on them pretty quick and next thing you know we're in a dogfight. We just couldn't score enough points. It just seemed like it was big plays, missed assignments. They were running a lot of that option stuff. They went through us that night. We were fortunate to win the game.”

Clemson is 6-0 and 4-0 in the ACC, and Swinney said he’s proud of the progress his team has made during the first half of the season.

“Just really proud of our team. At this point in the season, we've got six games to kind of evaluate and I think we've made a lot of progress in areas,” Swinney said. “I'm excited about having sometime next week to really put our best foot forward with the second half of the season and really evaluate and self-scout crossover stuff.

“We have another big challenge this week before we get to that point. Another nigh game on the road, division game. Every time we go on the road, it's some nigh game, electric crowd. I know it will be a great crowd. It's a good environment. We really had a tough time up there a couple of years ago. They had a bunch of big plays on us and we were fortunate to get out there.”

Because of the short week, Clemson practiced late Sunday night.

“I will say this about our team, I love how they've come to work this week. A short week, a different routine, the mindset they came back with on Sunday, that's usually their off day and they're not used to coming in here,” Swinney said. “Then all of a sudden they're back in here on Sunday, it's a Monday mindset. Monday's are always long days for them because it's one of their lab days and then to come back in here with another late practice, I like how they've responded. They've been very workmanlike. Just kind of about their business. I think they're excited about this trip. A lot of guys have not been to Syracuse, so looking forward to going up there.”

“They're well-coached and have good players. The Dungey kid (quarterback Eric) is a very good player - big, very accurate, very confident in what they do. They play very fast,” Swinney said. “If you give them any grass at all, they're going to take it. It's very hard to get to him. They don't hold the ball a whole lot - it's catch, cock and throw - and the ball is going downfield in a hurry. There are a lot of 50-50 balls and a lot of competitive plays. They've got a 290-pound running back that they'll hand the ball to. They do some neat stuff. They've got every screen known to mankind. They're a challenge. They've got the two best receivers we'll play - No. 3 (Ervin Phillips) and No. 8 (Steve Ishmael) - they're the real deal. After I watched the tape, I said, 'I thought Mike Williams was in San Diego.' That No. 8 catches everything. No. 3 is all over the place.

“Defensively, very experienced. They've got depth up front. They play eight guys on the defensive line. They've got four or five guys at linebacker. They're not as deep in the secondary or at safety. They're really good. They've got a good group. They pressure not quite 50% of the time but close. Just a ton of pressures. They force you to be very disciplined.”

"It's been good. He practiced all day yesterday. He moved around well I was very encouraged. Kelly is our starter. That doesn't change. We'll see him go practice today. He didn't miss a rep yesterday. Hopefully he'll be able to go again today."

"Our atmosphere is unbelievable. I know they sold all of the tickets. That's the administration. They're working on all of that stuff and trying to figure it out to make sure everything is coordinated properly. They'll get all of that figured out. It's very important that we have a great environment. I know there have been a few changes, but I'm not really in the weeds in all of that. I'm trying to get a football team ready to play. That's my priority and that's my job. The administration can handle all of that other stuff."

Playing in the Carrier Dome

“It's unique. It's different. I've been everywhere from coast to coast. You name it. The Carrier Dome is unique. We went up there two years ago. It's different than the Georgia Dome. When we land, we go by there and let them walk around. It's a little different. It's a very different setting just like it is for basketball teams. We went up there two years ago and that night they were playing basketball. The next day, it was a football field. Let me tell you, it gets loud in there. It'll get loud and intense. They have great history at Syracuse. I talk to our guys about that, too. I'll let them know they've had a few dudes come out of Syracuse."

What he's seen from Zerrick Cooper and Hunter Johnson

"Both of them, they practice every day, every week. In the NFL, the first guy gets all the reps. Here, the backups get plenty of reps. We rep our guys. They get a ton of work. They've all scrimmaged. We're going into our seventh game now. They've been playing their entire lives. Both have done a good job for us this year. They got in at Louisville. Last week that game was still in the balance and against a good defense. I know y'all are tired of me bragging on Wake Forest, but it was important for them to play ball and execute with the game on the line. That game wasn't won when they got in."