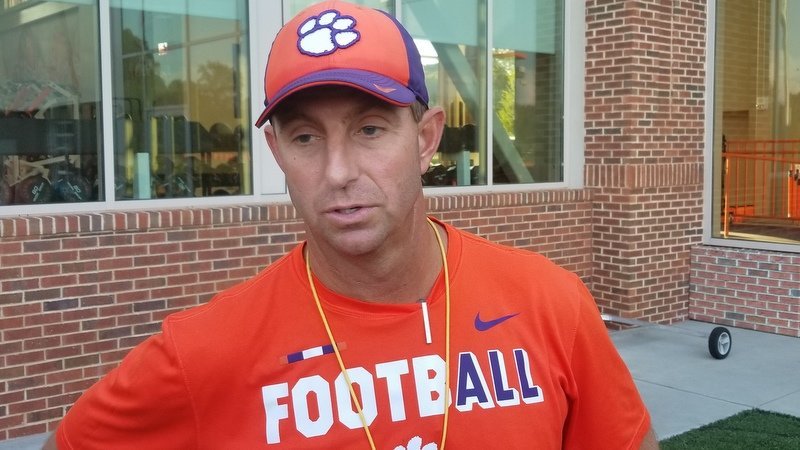 Swinney speaks with the media Wednesday

CLEMSON – Clemson was scheduled to play at 3:30 Saturday afternoon in Death Valley, but the threat of Hurricane Florence pushed that to a noon start. With so many factors still in play, even a noon game isn’t assured, but head coach Dabo Swinney doesn’t care.

He just wants to play.

“Hey man, as I told y’all the other day, just tell me when to play. My job is to get the team ready and everybody else’s job is to tell me when to show up,” Swinney said after Wednesday’s practice. “We’ll play whenever. We’ll play tomorrow if we need to. We’ll play whenever we need to. My job is just to be ready. There’s a lot going on, obviously. This is a monster storm and who knows what could happen. You just have to rely on folks that this is what they do. I’m still praying that somehow, some way, the good Lord will calm this thing down. Hopefully, everybody is preparing and getting out of harm’s way. Stuff can be replaced, things can be rebuilt but lives are precious, so hopefully, everybody has had plenty of time to prepare.”

Swinney said the team hasn’t been bothered by all of the hurricane talk.

“We’re just kind of in our own world over here. We’re not on the coast so it’s a little different for us,” he said. “We do have six or seven guys whose families have been making arrangements to get out and get here and all of that type of stuff. We’ve put a plan in place. It’s actually been a great week of practice. Guys do a good job of when we cross the lines, having good football focus. This has been a week where there’s a lot going on but they’ve been really locked in at practice.”

The Tigers practiced for two-and-a-half hours Wednesday inside the indoor practice facility – a faulty sprinkler system forced the practice inside – but Swinney said the team appears to be locked in.

“It’s amazing how it’s a blur. It’s week three. Tomorrow is a Thursday practice for us,” he said. “It just seems like it’s flying by. I thought today was one of our better Wednesdays. There was a lot of energy out there today. Guys were really focused and really spirited. A lot of good on good. A lot of good competition. A really fun two-minute drill at the end. Just trying to get better and I think we’ve done that this week and hopefully that will show when we play this week.”