Swinney says Cain has done everything asked of him

SUNSET, SC – Deon Cain is well on his way to rejoining the Clemson football team, but “he ain’t back yet.”

The sophomore wide receiver was suspended last December for Clemson’s College Football Playoff Game against Oklahoma and for the National Championship Game against Alabama after violating team rules.

In addition to the suspension, Cain missed all of spring practice and Clemson head coach Dabo Swinney laid out certain criteria the Tampa (FL) receiver had to meet before being able to return to the team.

Swinney met with the media Tuesday evening at The Reserve at Lake Keowee for his annual media golf outing and told the media that to this point Cain has completed all of his requirements, but he still has two more weeks to go.

“Obviously, I was very disappointed with Deon back during the playoff and all of that. We could've played him,” Swinney said of the decision to suspend Cain. “I didn't have to sit him, but I felt like he's a guy that didn't really understand or appreciate his opportunity. I don't think he really understood the magnitude of the bad decision that he made and how that affects lots of things. All you can do is respond a certain way. He's done a nice job. I kind of laid out a lot of things that were going to be required of him throughout the spring and so far he's done a good job, but he's still got two weeks to go. That's what I tell him all of the time. He ain't back yet, but hopefully, he'll continue to make the right decisions.”

Even though Cain should be cleared to make his return, Swinney said he still had a long way to go to earn back the trust of his coaches and teammates. 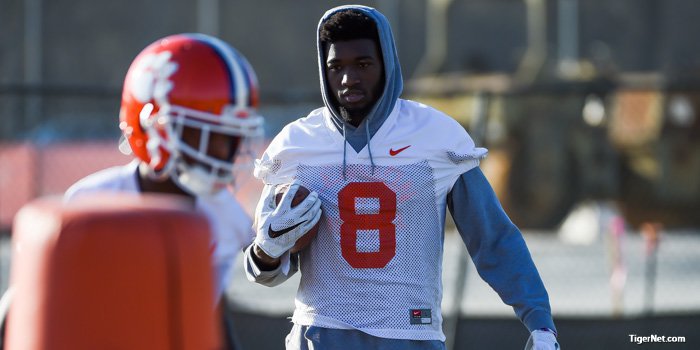 Swinney says Cain has done everything asked of him "

“He's a guy that's got to earn some trust back. He doesn't have any money in the bank,” Swinney said. “He's got to make some deposits and you do that through consistency and being committed. It's been a quiet summer from that standpoint. He's done what he needs to do in the weight room. I anticipate that he'll be good to go and hopefully he has learned and grown from this overall experience.”

As a freshman, Cain had 34 receptions for 582 yards and three touchdowns and led the team in yards per reception.

Swinney said he doesn’t doubt that Cain can be successful on the gridiron, but he wants to see him be successful in every aspect of life.

“As I said back in the spring, football is the least of my concerns with Deon. He's a very gifted football player, but I want him to be more than a good football player,” he said. “I want him to be a great man. I want him to be a great citizen, great husband, great father one day. I want him to appreciate the gift that God has given him and not throw it away. We've got enough examples of that. All you can do is try to pave a good path for him, but he's got to go do it. I'm hopeful that he's grown up and he's learned and we don't have any more issues from him and that he'll go on to do great things here. If he's here, he's going to do great things, but he's got to continue to stay on the right path.”