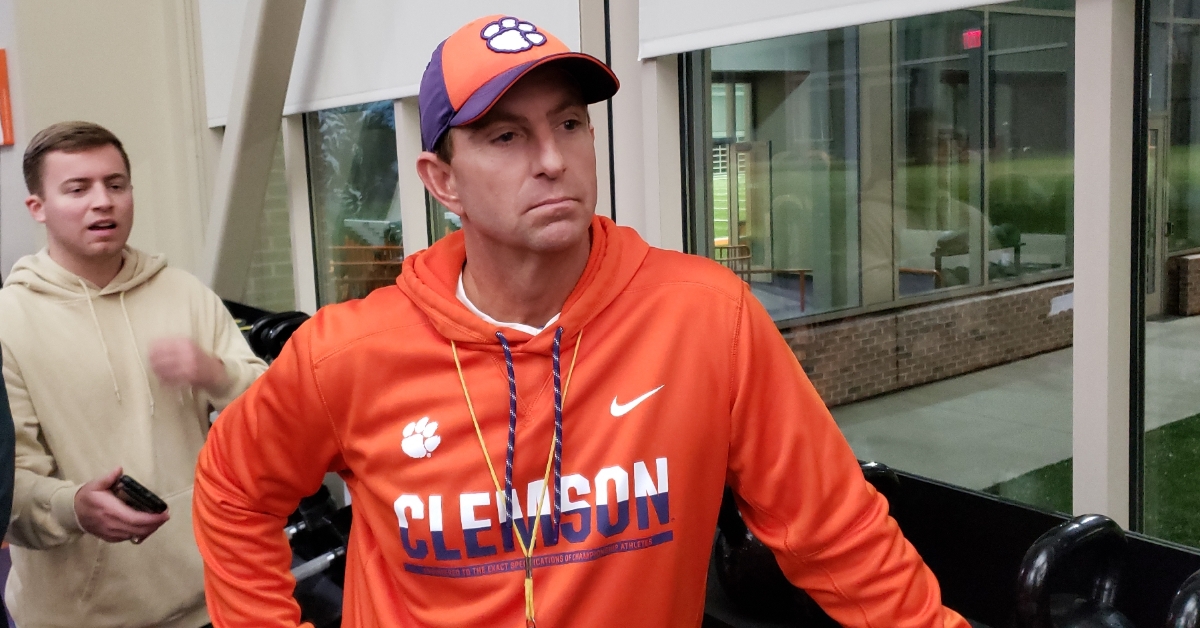 CLEMSON – Dabo Swinney has no idea what else his team can do to impress the College Football Playoff committee except keep winning games and hope someone takes notice of what’s happening in little ol’ Clemson.

The first CFP Rankings were exactly what many expected -- two undefeated teams each from the SEC and Big Ten, plus defending national champion Clemson. The order, however, was up in the air until the rankings officially came in. Ohio State opened as the No. 1 team in the nation, followed by LSU at No. 2, Alabama at No. 3 and Penn State at No. 4. Clemson, held accountable for a one-point win at UNC in late September, was left out of the four-team field at No. 5 with one-loss Georgia checking in at No. 6.

Swinney didn’t get to see the show – he was enjoying birthday cake with his mother – but found out the results in a hurry.

“I found out pretty quick because all of a sudden my phone starts blowing up. 'Gas up the bus, coach!' People are so mad, but it's all good,” Swinney said after Wednesday’s practice. “We are one of those teams. We are in the mix and we have to keep winning and hopefully, we will scratch and claw. Last time I checked they don't give trophies after nine games. It's all good. We are just honored to be one of those teams that has a chance. We are going to keep scrapping and clawing and see if we can try to win games.

“We only have one spot to go before we get in there so hopefully, we can play well enough. We have a lot of ball left. Hopefully, we have (at least) four more games. You get 12, and you have to earn anything after that. You can't win 12 until you win ten. That is that old barbershop mentality, right? Hopefully, we can play well against NC State and find a way to win. A 10th win would be huge, a big accomplishment for our program, and keep us on track for the division. We have 10 days until the division race is over. Again, they don't give those trophies out after nine games.”

Swinney said he knows he doesn’t have to tell his team about the rankings and Clemson’s spot.

“These guys know. I don't have to say anything. Again, we are a team that has a chance. We are one of those teams. It's not worth getting worked up about,” Swinney said. “We need to focus on beating NC State. That is all we need to worry about. You lose to NC State and none of that matters, We are in playoff football. Everybody wants to expand the playoffs, but if we go to eight teams then this game this week isn't that big a deal. We don't have that luxury.

“This week is a huge game. And next week is a monstrous game. And after that, guess what? A monstrous game. It's like the state playoffs in high school where you have to win every week and that is our mindset. But I love that. We are built for November and we are built for the postseason. Everything builds to this. I love it. A lot on the line every week. If we are good enough to get across the line first it will work out. If not, then we will reload for next year. I just want to get to Charlotte right now.”

Swinney said his team is playing a lot better than many in the nation might think.

“I don't know what else we can do on the field. We have the best offensive production we've ever had, ever. Ever,” Swinney said. “College football has only had two defenses in 20 years that have held nine opponents to less than 300 yards, so if it's about what's on the field, I don't know what else we can do. We're playing pretty good. We just have to keep playing well. We've had four games in a row that we've played pretty clean but that's a sign of maturity. If we're playing our best football in September and October and then (you kind of dip), that ain't the recipe. You want to build depth. You want to build confidence. You want to stay healthy and you certainly want to dominate your opponents, and I think we've done that every game but one.

“You want to position yourself for big things in the postseason and we've done all those things. We're in a good spot so we just have to finish. I think we're in a very similar position team-wise to last year but that team finished. Is this team going to finish and stay focused on the little things and really have that burning desire to finish the right way.”

“Everybody is back. Everybody is healthy. We finally got X (Xavier Thomas) back. He had a great week. Denzel (Johnson) is back. We're in good shape. We've got one more week and then we've got an open date. We hadn't had that in a while. I can't remember having an open date that late in the season, so that sets up pretty good, too. I like our schedule. We just have to finish. We've got eight days left and there's nothing more important than Thursday (tomorrow).”