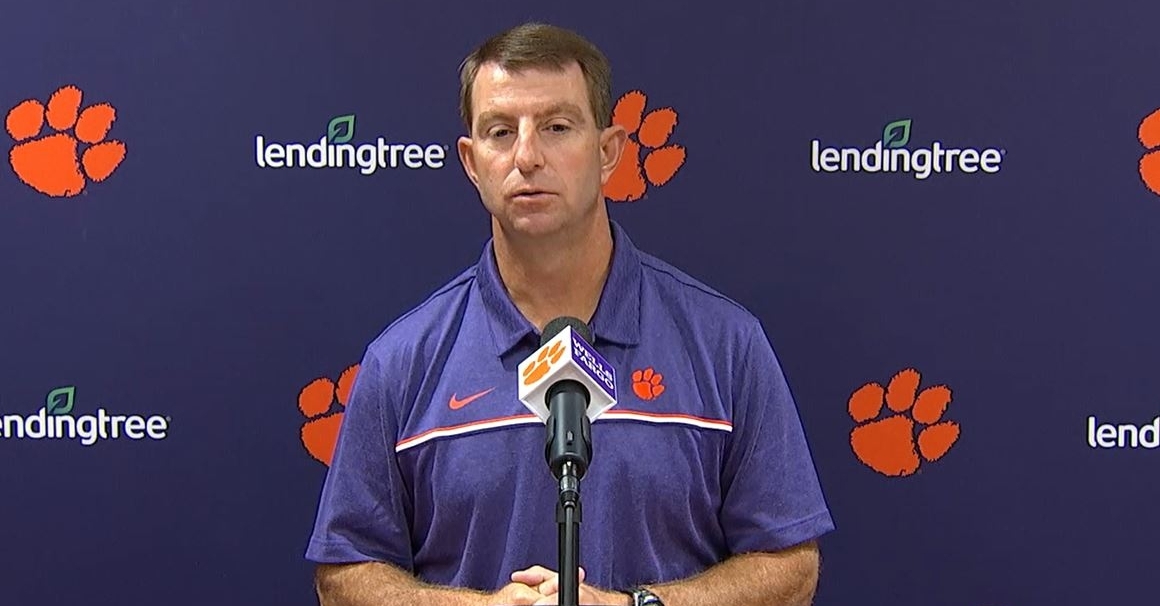 CLEMSON – Head coach Dabo Swinney is a traditionalist who supports many things, and that includes everything from a consistent and recognizable look to a team’s game day uniforms to the importance of the lives of his players and coaches. What he doesn’t want to support publicly is any political organization.

Clemson’s helmet stickers this fall show support for social justice – they are wearing helmet decals that read “Love,” “Equality,” “Black Lives Matter” and “Put a Stop to Racism.” The team’s official Twitter page, @ClemsonFB, put out a photo showing all for with the words “Playing with a purpose.”

The stickers have drawn ire from many in the Clemson fan base who feel that the stickers show support for the organization “Black Lives Matter” rather than state the simple fact that black lives matter. Swinney was asked Monday night during his radio show to reconsider one element of the social justice stance.

A caller identified himself as an Upstate law enforcement officer and intimated that the school was supporting an organization in Black Lives Matter “built predominantly on hate” and that some of the actions attributed to the group are a “spit in the face to law enforcement.” He asked for the school to look into the organization and re-think the BLM stickers shown on pictures of helmets.

Swinney responded by saying, “I appreciate your heart and your sincere comments -- the biggest thing I can say is first of all, my brother was a police officer for almost 30 years. I have a lot of former players who are police officers -- white and black. In fact, I had a couple of them come and speak to the team. I have a great respect for law enforcement. I would say this, there is good and bad in everything. There’s good and bad people in every walk of life. Whether you’re a coach, police officer, a protester. You know, there’s bad ones. We all obviously see that. Wrong is wrong and hate never wins out and we have a lot of both of those going on in our country right now. But for our football team, this is America and everyone has the right to free speech. They have the right to choose whatever religion they want.

“I’m a Christian. I don’t make any bones about that. But not everybody is a Christian and that doesn’t mean that they’re bad. I don’t judge everyone on if they don’t think what I think. I think that’s one of the issues we have. We don’t have tolerance or respect for differences of opinions or views any more. There is no one around here who supports death of any kind. Senseless death of any kind. Racism. Anything against the police or police brutality. Anything. Nobody supports those things. Now sometimes individuals have their thoughts and that’s what makes our team great. These guys have been challenged with lots of different things and they’re figuring things out. They’re young people. They have to make their own decisions.”

He went on to say that he supports his players and their desire to express themselves.

“I’m not for anything that’s gone on as far as uniforms and all that stuff, but this is something that came about and opened up this year,” Swinney said. “Guys have the right to express themselves and support them in that. Whether I agree with certain things, it doesn’t matter. This is them learning, growing and figuring things out. Young people grow. Some people change. Some people think something at 20 and think something different at 30. We’ve all been there. But I can tell you this, we have a united football team that definitely doesn’t all think the same. They definitely don’t think all the agree on everything but they love each other. I think that’s a great example for all of us. As for people supporting hate or bad things against cops, that’s crazy. Nobody supports that. There may be people who do but not in this camp here.”

He was pressed further on the topic during his Tuesday press conference, and Swinney said that he doesn’t support political organizations like Black Lives Matter, he simply supports the message that black lives matter.

“It's not that I am not for the messages, I am just a very traditional guy. I came from Alabama. Really the same reason we don't change our uniforms,” Swinney said. “It's not really for the messages or whatever, it's just that I have always not messed with uniforms. That has always been my deal. That has all changed this year and guys have had the opportunity to express themselves in a way for things that they believe in and a cause that they support, and I certainly support that. I was more talking about the uniform-type stuff. That has been our policy here ever since I got the job as far as how we do our uniforms. That is just a product of 13 years at Alabama. I remember when they put the Nike logo on the uniform at Alabama, you would have thought the world was coming to an end. That has been my mindset for a long time. That is something that was made available this year and I certainly support my guys.