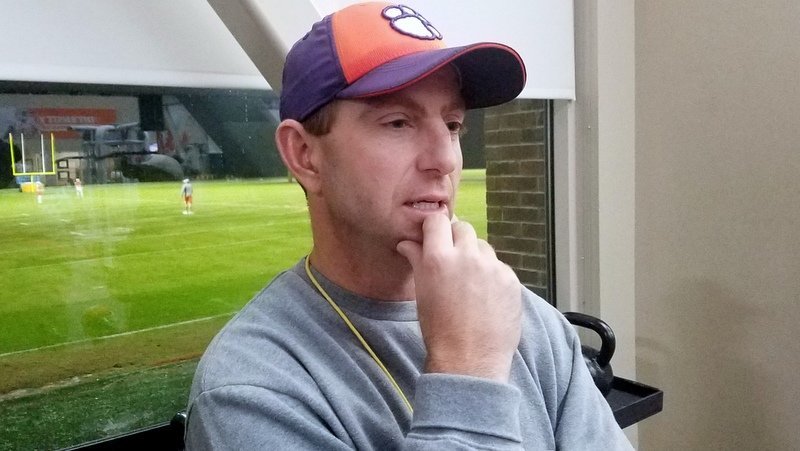 Swinney is not a fan of Playoff expansion

CLEMSON – The current College Football Playoff format sits at four teams, but there have been the recent talks of expanding the field to eight teams. Don’t count Clemson head coach Dabo Swinney as a fan of that scenario.

No. 2 Clemson has made the College Football Playoff each of the last four seasons, but teams like Central Florida (undefeated last two seasons) create the conversation that more than four teams should be allowed. Georgia had two losses this season but is seen as one of the four best teams, and the people at Ohio St. feel like they should’ve also gotten a playoff berth.

A news story this week mentioned that talks about expanding the playoff to eight teams had been held, but Swinney says he wants college football be unique.

“I am the wrong guy to ask that. I would be more about going back to two, to be honest with you,” Swinney said Friday. “I am not a ‘more is better’ guy. I know there is a huge crowd out there for that, but I think college football is unique. And then suddenly it becomes like everything else when you do that.”

He then said he likes the current bowl setup.

“You have 34 bowl games or something like that, so you have 34 teams that get to end their season on a positive note and then build momentum going into the offseason,” he said. “I love that about college football. I love all of the funky matchups. I love the Funky Cold Medina Poulan Weedeater Bowl in wherever. I love all of that and I love the crazy games. There is obviously a market for it because television loves to put it on there. I love the trips. I have experienced it as a player and a coach, and I am more traditional, and I get that.

“We benefitted from being able to get in the final four. And it's hard. I hate that all of a sudden now it's not cool to go to the Gator Bowl? Are you kidding me? I don't like that mindset. I think the more you expand the more that becomes (the mindset). I know that falls on a lot of deaf ears. It doesn't mean I'm right, it's just my opinion.”

Swinney said the college football regular season has to matter.