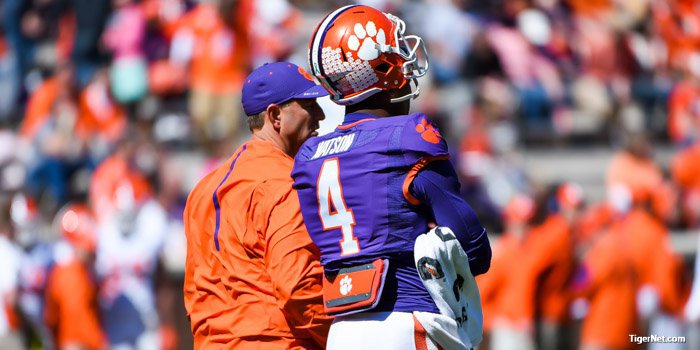 CLEMSON – Dabo Swinney saw everything he needed to see Saturday.

Clemson’s Orange defeated the White 17-9 in front of a Clemson spring game record crowd of 50,500 on a sunny and blustery afternoon in Death Valley, but Swinney was cool and calm following the game as he discussed his thoughts about the game and his program moving into the summer.

“I thought it was competitive. There were some really good plays on both sides, and I thought we got out of it what we needed to,” Swinney said outside the Clemson locker room. “Nobody got hurt, so that’s a positive because when you step between the lines, it’s physical.”

Having a record crowd on hand made the day even more special.

“First of all, I just want to thank our crowd. It was awesome. It just gives us the opportunity to help develop our team,” Swinney said. “When you’ve got 50,000 plus in the stands, it creates a game day environment, and you can’t simulate in that practice. To have that piece added to the evaluation and to give a lot of young guys who really haven’t played yet that feeling of having played in a game, that’s priceless.”

Swinney said the coaches have enough tape to evaluate a young team, a team that has just 22 juniors and seniors.

“This will be good tape that we can evaluate,” he said. “When you split the team, it’s a mixed bag out there, and you’ve got people playing that might not be playing, but we’ll evaluate each person individually. We’ve got a lot of information to process as a staff, but overall it was a solid spring. We’re progressing. I thought the backs ran well today. I thought the receivers played well today. Trevion [Thompson] had a couple of misses today, but he had a good day.

“Hopefully, he can take some confidence out of that. Ray-Ray [McCloud] made some plays. I thought the quarterbacks all did some good things. Overall, it was positive. Not really disappointed other than our backup kicking situation. We’ve got some work to do there, but I think we’ll have some answers. That’s not what I’ve seen in practice, but that’s what I’m talking about. It’s hard to simulate that pressure.”

He then said that Kelly Bryant and Nick Schuessler are in a dead heat for the backup quarterback spot.

“I think all of those guys did some good things. Kelly comes in and makes some nice plays,” Swinney said. “A couple of times he held the ball a little too long. Part of his game that makes him special is his ability to create and you kind of take that away from him with the quick whistle. He made some nice plays. He had a really nice corner throw to Leggett in the wind. That was a big wind out there. I could tell they were a little frustrated during warmups, so I went over there and said, 'Hey, them boys down there in Augusta are having to hit it today. They aren't canceling the day, so you better figure it out here because we're going to play.' It was good to see him make some nice throws.

“Nick is just steady. He just makes plays. He just knows what he's doing. He moves the team. I thought Tucker came in and made some nice plays. He's a little bit of a gamer and a gunslinger and made some nice throws. If we would've had the chance to make that one, it would've been interesting if we would've made that catch in the endzone and had the chance for the two-point conversion. All of them did some good things. We'll process everything and by the time we get ready to go to Auburn, we'll have a definite number two.”

“I thought they did some good things. Marcus Edmonds had a great play on an interception and Ryan Carter did some good things. Ryan had an interception on a play that Ray-Ray made a mistake on - it was supposed to be a comeback and Ryan read it. And then they got burned on a long pass and got greedy, jumping the outcut and got burned on the out-and-up, looking at the quarterback and not reading the receiver. We have to learn from that. Marcus is a guy that has been around here but doesn't have much game experience so this is good for him. He's had a good spring and so has Carter and Mark Fields. We are going to be fine at corner. In fact, we are going to be better than fine. We are going to be good.”

“I didn't need to see him today to know. I saw that in the 14 practices that preceded this. It was good for him, though. But he definitely has the ability.”

“I think it's good from the standpoint of being able to see Artavis make some big plays. It was kind of windy, and we were trying to give everybody a chance to get a look at them. We had a real low line-drive punt on that one, so you have no chance at coverage with that, so you're going to get a return from that. I think Ray-Ray is a guy that we would love to become a go-to guy for us in that return game because we think he can be special, but we know Artavis can do it. We all trust him. He had a 50-yard return in the national championship game. He's got the ability to go score for you, but we're really trying to challenge some other guys and develop some other guys as well. Ray-Ray is one of them that we need some production from in the return game.”

“I was messing with him during pre-game telling him that the legend of Hunter Renfrow is diminishing because Seth Ryan has had such a great spring. Seth Ryan has had a great spring. He made a couple of plays today that he's made two or three of those every day in practice all spring, whether he's going against the first team, the third team. It doesn't matter. That kid has really developed into a solid, dependable guy. I was just saying that to Renfrow in pregame and dadgummit if he doesn't go make a great play on a great throw by Deshaun right into the wind. He's picked right up where he left off. He likes it when the lights are on.”