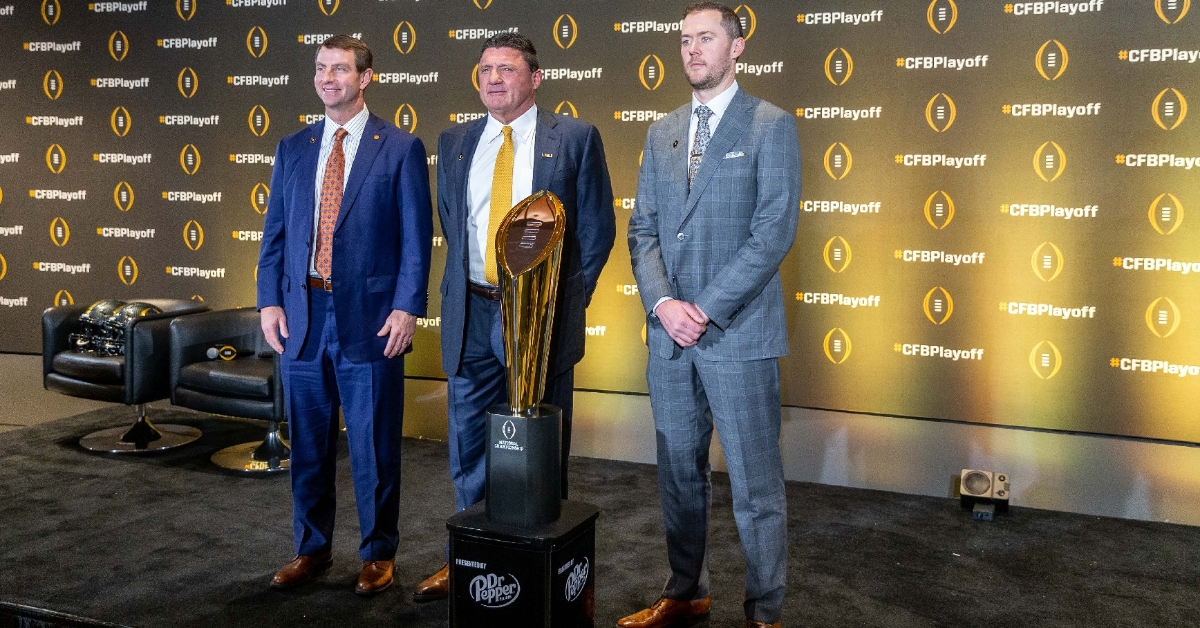 Swinney and Ed Orgeron of LSU and Lincoln Riley of Oklahoma

All of the college football awards shows had one thing in common – a decided lack of Clemson talent. All that does is add fuel to the ROY Bus.

Clemson head coach Dabo Swinney and linebacker Isaiah Simmons were invited to Thursday night’s Home Depot College Football Awards Show, and Simmons was allowed to walk the red carpet as the Butkus Award winner. Other than that, however, the Tigers were a mere afterthought.

Program host Chris Fowler joked during the program that the snubs would likely give Swinney plenty of motivational ammunition heading into the College Football Playoff, and Swinney merely shrugged in agreement.

LSU and Ohio St. were the big winners Thursday night, and the other three participants in the playoff had a member at Saturday night’s Heisman Trophy ceremony in New York. Missing? Clemson, of course.

You can almost hear the engine on the ROY Bus (Rest of Y’all Bus) revving now.

"Every year you start over," Swinney said Thursday at the CFB Playoff media conference in Atlanta. “We remind ourselves of that all the time. You got to earn it every single year. But yeah, the 'ROY Bus' is fueled up, for sure. It's been easy this year. I really haven't had to do a whole lot. Pretty well stated on that, I think, on the record on all that stuff. I think, as a coach, you take free fuel any time you can get it. We have a good football team. We've earned our opportunity to get here. I'm proud of them.”

Swinney’s Tigers are the number three seed, but many of the casinos in Vegas have Clemson as the favorite.

"At this point it doesn't matter if you're one, two, three or four. You're going to play a great team. The margin for error is very small. We just wanted to be here, to have that opportunity. We are what we are right now — we're a team with a chance. Hopefully, we can take advantage of that opportunity."

Swinney said this year’s team has been focused since day one.

“This year's team, one word? Focused, been really focused all year” he said. “Easy group to coach, to prepare. Every single week they've been focused on trying to get the job done. That has not wavered all year long. So super proud of them.”

Swinney used the ROY Bus as motivation a year ago when Alabama was the overwhelming favorite to win the playoff, and when the Tigers dropped from the number one spot earlier this year he brought the bus out of its garage.