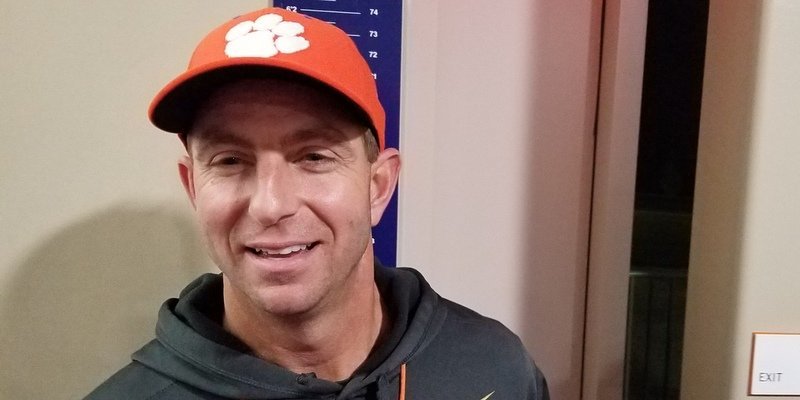 No. 4 Clemson hosts Florida St. Saturday (3:30 PM, ABC), and the forecast is for sunny skies and temps in the mid-50’s. That and the fact that the Tigers can clinch the ACC Atlantic Division title with a win has Swinney excited, and he’s hoping the fans share that same excitement.

“First of all, there are only two games left in the Valley. We sit around and moan and groan all year long waiting for football to come,” Swinney told TigerNet after Wednesday’s practice. “The season has just flown by. Enjoy it. Have an appreciation. That's kind of been my word for this year. Just have an appreciation for the opportunity that not everybody gets whether that is them as fans or us as players and coaches. Not everybody gets an opportunity to compete for a division championship. Not everybody has an opportunity to play on a team or coach on a team that competes for a division championship. So it's special moment.”

Swinney said the fans need to embrace the moment.

“I think every time we play in the Valley it's special but this is November football. So show up and let's go. We need you. We need that great energy,” he said. “Our fan base here makes a difference. They really do. There is no question about it. I have seen people jump offsides three plays in a row. Was that Louisville two years ago? Three plays in a row. I'd like to say I was some great coach on that but you got to tip your hat to the Valley. It's awesome when they are here and rocking. I think it is going to be cool. Some good football weather. I think everybody thought it was going to come down to Clemson-Florida State and it has. Nothing has changed.”

Like 2009, Clemson can clinch the title if N.C. State loses to Boston College (that game starts at noon), but Swinney says he isn’t worried about what happens in Boston.

Clemson held on for a 38-31 victory in Raleigh last weekend, and Swinney said he thinks his younger players are learning how to handle adversity.

“I thought they grew up a lot last week. We played far from a perfect game. We played probably our worst game defensively,” Swinney said. “We did a lot of good things but we were out of position. They took advantage of some things. Missed tackles. Offensively, we missed a bunch of plays. Special teams, we kicked two out of bounds. It’s not like we played some flawless, perfect game. We had some critical penalties. I think the biggest thing was watching them fight through the adversity in that setting. Knowing that you’ve left some stuff out there but continuing to battle and all of a sudden in the third quarter, boom.

“We played a really, really good third quarter, which gave us an opportunity to win it in the fourth. I was proud of them. To me, that was a good growth for this team. It’s encouraging because there is no better teacher than experience. They haven’t had a lot of adversity. This team really hasn’t. We didn’t handle it very well up there (at Syracuse). I did an awful job so it didn’t really matter what they did. To see them respond was good. They’re back here this week and we’ve had a good week of practice. This is game 10. If they need me to say a whole lot to them this week, then we’re in trouble. They’ve responded good.”

“Drew Costa was sick today with a stomach bug. Christian Groomes has had a great week. He’s had a great two weeks. Groomes came down to the last kick on Thursday. We had to go into overtime last week and Groomes won it in overtime to get the last seat on the bus. They’ll all be with us this week. Alex is definitely out in front. That part is not close. He’s had a solid week. Groomes, I don’t think he’s missed one this week. He’s been really, really impressive, so I’m really proud of Christian and how he’s responded.”

“It’s pretty much status quo. Street (quarterbacks coach Brandon Streeter) is comfortable with both of them. It’s a situational thing with where we are in a game, what’s going on, who we’re playing, what’s going to be needed in that situation. Up at Syracuse, it was a pressure every play and he felt like Zerrick had the best command of what we’re doing. Hunter is much improved but he’s still grasping everything. In the Georgia Tech game, there wasn’t near as much pressure and a little more of a running situation. Things that he was comfortable with and that Streeter was comfortable with. I trust Street. He’s a heck of a coach and that’s why I hired him to coach the quarterbacks.”