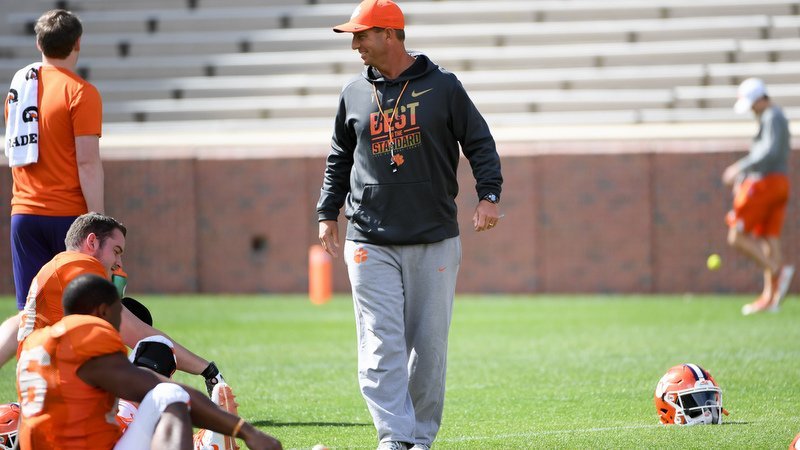 CLEMSON – Dabo Swinney will soon have all the pieces of his 2018 football team in place.

The rest of the 2018 recruiting class report to campus this week and Swinney said he’s looking forward to getting everybody on campus.

“Yeah, it’s been really cool because a lot of these guys have been able to work camp with us,” Swinney said. “Our signees can work the camp, which is a new rule as well, so that’s been pretty cool just being able to hang out with them a little bit and watch them coach and teach, so I’ve had a chance to see them most of them. But we’ll all be moving here a week from Sunday. It’s exciting to get them all here, get them plugged in and get the going. As y’all know most of the team has been here all summer, but we have eight signees that’ll be joining this group and then a few walk-on guys that will come in and complete the team.”

Swinney said the new players will join a program that has won a National Championship and achieved a level of excellence that only a few elite programs can brag about. The new players have to buy in.

“Yeah, it’s been very intentional, purposeful, a lot of great people. A lot of great players that have bought into who we are, what we do, and how we do it and we really believe in that,” Swinney said. “A lot of great coaches and great staff. Great chemistry, we’re all on the same page, and we just really focus on the culture of our program. The last eight years we’ve been the second-most winning program in college football, but seven out of those eight years we’ve been in the Top 10 academically.

“So, you know, I think that speaks to the type of people involved in our program and the culture that drives everything here. That’s a simple answer to the question but that’s what it comes down to - accountability, leadership, who’s coming in the door, the type of development we have here, and the philosophy of our program.”

He then said how he relates to players hasn’t changed since he became the head coach – he treats an entire team the same he treated his players when he was a wide receivers coach.

“And with the staff, I treat my staff the same way. I have a great relationship with these players and that’s the best part of my job, just the interaction with these guys, I love it, I love what I do, and I’m passionate about helping them be successful, just figuring life out and helping them be prepared for life after Clemson.”