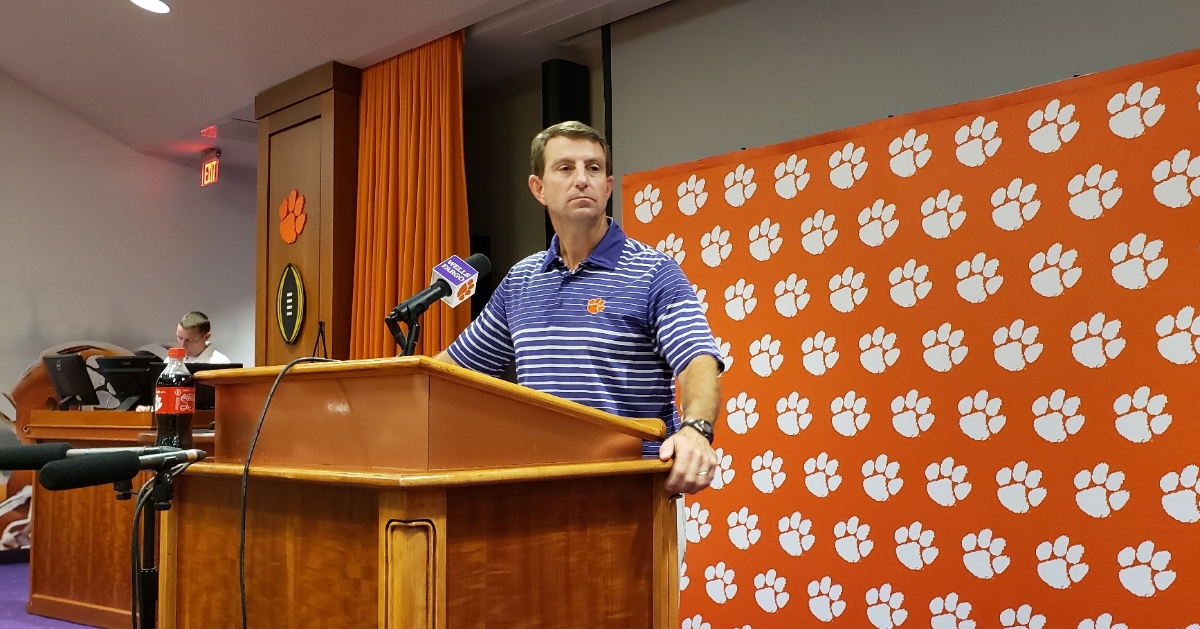 CLEMSON – Top-ranked Clemson steps back into conference play this week when the Tigers travel to Chapel Hill to take on North Carolina and new head coach Mack Brown.

The Tar Heels are 2-2, losers of two straight games after starting the season with wins over South Carolina and Miami.

“You can tell and see the new influence of Mack Brown and his new staff and what they're trying to do with building a culture there. Those players play incredibly hard,” head coach Dabo Swinney said during his Tuesday press conference. “Really impressed with what they are doing. They have an excellent scheme. They have brought a lot of pressure defensively and at a lot of different ways. They're confident in their man coverage. Their backers are active and everyone is flying around and playing hard and physical. They have gotten better as games have gone on. I'm impressed with their personnel inside. They're athletic at defensive end.”

"Offensively, they're very young. They've got talent and they're explosive. Everything goes through the quarterback,” Swinney said. “He's kind of like Baker Mayfield. He's not as fast, but he's got that kind of toughness and grit. The bigger the moment, the better he plays. He's got some savvy to him. He makes a lot of plays with his legs. He has a good feel for the pocket. They'll run some option and quarterback draws and lots of RPOs. He has been really good in the fourth quarter. He's like 70-something percent on passes of 10 yards or more.

"When the game has been on the line, he has been really good. They're young up front. I think this is the best group of backs we have seen. That kid last week might be the best overall back and he'll probably play on Sunday, but this is the best group of backs. They'll roll them in and out of there. Their wide receivers have won a lot of competitive plays. We have to do a good job with them and their skill players. They've got a good scheme. They get into some two-back stuff, but mostly 11-personnel (3 WR, 1 TE).

"Very well-coached team. They have a good plan and have a great spirit to them.”

He then said he knows the Tar Heels will give Clemson their best effort.

“They'll be excited to play us. We'll get the very best version of North Carolina,” Swinney said. “They're definitely good enough to beat us, no doubt. For us, we need to build on what we did this past week. We have played four games now, so we need to look like we have played four games. We need to be more consistent with our technique and fundamentals. We need to play fast and be who we are and get the turnover margin back on the right path.

"I'm excited about this trip. I've only been there one time, 2010, maybe the worst coaching job I've ever done. We have an open date coming up. It's hard to believe this is game five. We're a pretty healthy team, too. So we want to play well and with confidence. I'm excited about competing against coach Brown. He's one of the best to ever coach the game and I think he's one of the best people. He is a true gentleman and he loves the players. He's one of the most respected people in this business. He has been a great friend to me. It's kind of cool. I'll visit with him a little bit before the game.”

“Blake Vinson is out. He'll miss the rest of the year. He's going to have surgery. We're going to do it so that he can be fully recovered and ready for spring practice. With the new rule, he can get this year back. He redshirted as a freshman but will lose this year for medical reasons, so he could have a sixth year if he wanted it. Will Putnam who played a lot last week will now have an opportunity to get into that mix."

Does he see any players transferring after four games?

“The guys who have played in four games, they're going to continue to play for us. We don't really have anyone who is in that category. We have a few guys that we know we want to hold, but they haven't played in four games yet. Nothing different for us."