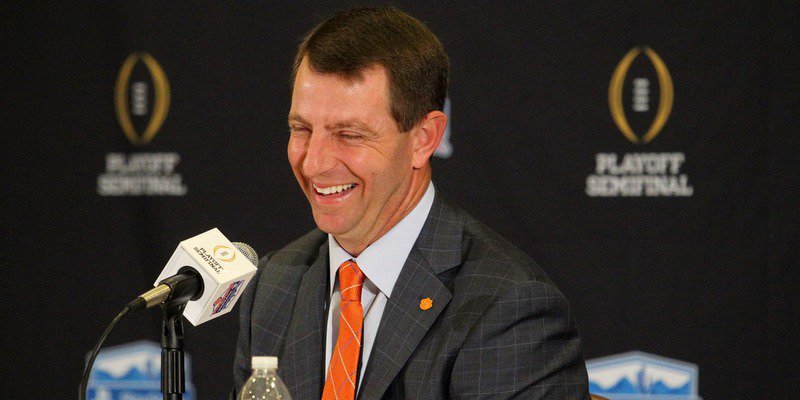 SCOTTSDALE, AZ – Dabo Swinney has hoisted the national championship trophy as a player, but he can only envision the day he is able to celebrate a College Football Playoff National Championship as Clemson’s head coach.

The first step to the 2017 national championship is Saturday at 7 p.m. when the Tigers square off with Ohio State in the College Football Playoff Fiesta Bowl.

Swinney and Ohio State head coach Urban Meyer met with the media for the final time prior to the matchup Friday morning at the J.W. Marriott Camelback Inn, and Swinney said he has thought many times about winning a championship.

“I can visualize that. I've been there. He's exactly right. I've had several -- I had some teammates this week come out to practice that I played with at Alabama,” Swinney said Friday. “And, I know what it's like to reach that moment. And he's right. You're brothers for life. When you do something like that together you never forget that. Ever. And we had a reunion back in May. And I mean it's been 20-plus years. But it was just like yesterday. I mean, immediately you see these guys, some of them you haven't seen in 10, 15 years, and it's like you were sitting back at Bryant Hall with them yesterday.

“And that's what an accomplishment like that does. It is a bonding experience. It's an unbelievable pinnacle. And you know, for me, a lot of times people ask me: What's one of my greatest memories as a player and stuff? And I think a lot of people expect me to say maybe it was some play or the National Championship game itself or whatever. And that was great.” 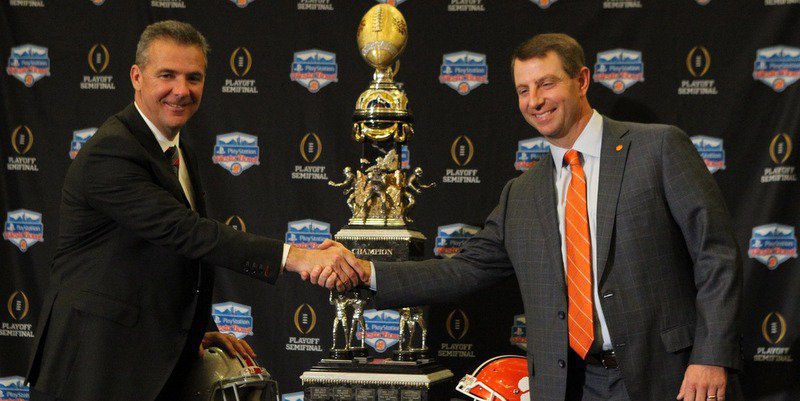 Swinney said that as good as it felt to win a championship with Alabama, it’s not the games or specific plays that he remembers the most, it was the ride it took to get to the title game.

“But that's really all fleeting. It's really the journey to get there. It's the grind. It's the work that you put into it. It's the overcoming of adversity,” Swinney said. “But it's the moment in that locker room when you're with a group of people that have gotten it done and laid it on the line. And there's just nothing like it. You just can't describe it. And if you could bottle that up and take that out into the world, then you dominate. Because it's a special bond and love. And it's awesome to be a part of.

“So I can definitely see it and visualize that and hopefully we'll have our opportunity to hold the trophy up one of these days. We're going to keep getting in the batter's box and keep swinging, and hopefully one of these days we'll get it done. And we've got a chance this year. But they don't give those things away, man. You've got to go earn it and play well and you've got to beat the best. And that's what we're playing, the best of the best.”

However, no matter what happens between the Buckeyes and the Tigers Saturday night, Swinney will make sure his players know that he appreciates everything they’ve given for Clemson.

“I don't want to ever -- I personally, winning is not our number one goal. It's just not. We want to win, but it's how we win, it's how we're graduating our players, it's how we're changing and impacting their lives, preparing them for what's next,” Swinney said. “Are they having a great experience? Are they excited to come back to Clemson? Do they have great relationships? It's a relationship-driven program. And that's what we focus on and making sure that we have fun. I don't want to ever become a team or a program that when we win it's just a relief. I want to always have an appreciation for how hard it is to win. And understand that sometimes you lose.

“And that's okay. It's did we bust our butt? And you're always growing. You're dealing with young people and the roster changes every year and you always start over. And I think as coaches sometimes when you talk about get on cruise control, if you had a lot of success you just kind of assume certain things. But you can't do that. You have to -- to me you start over every year and you reinstall your core values of who you are as a program and why. And maybe those seniors have heard it three times, but you know what? They didn't get it all as a freshman, sophomore, junior, but by the time they're leaving as a senior they're telling the same stories and 15 years later they're repeating those stories.”

“Great young men, first of all. And the reason everybody was recruiting them was because they were phenomenally talented young players. But just good young men, good families. I enjoyed recruiting those guys and have enjoyed watching them. Believe it or not, I've never really recruited against Ohio State until Coach Meyer went there.

“And once he went up there and I think he brought some of his ties and recruiting experience from being at Florida. And it seems like now there's a lot of guys we end up recruiting. Ohio State is kind of always in the mix. And I think that ultimately that's why we both have been successful, we've got good staffs, but we've had good young people, good players. He's done a great job of identifying guys and building a culture at Ohio State, and we've tried to do the same. And that's why we've got on some of the same type of people, because they're really good players, but I mean you get around Raekwon, he's a great young man. And it's great to have those guys because you can win and win the right way with them.”

Meyer on spending time with Swinney at Nike events

“Oh, yeah, I've got plenty (of stories). I'm not going to -- I can't do that. (Laughter) because what stays at -- what goes on at Nike stays at Nike. That's Phil Knight's mantra. I want to go back to the Nike trip.”

“I think you see, obviously, his skill set. I would think that you would see his poise. And to me his poise really makes him incredibly unique, because he just -- he just never changes. But it's who he is as a young man that you don't really know until you're around him. Most people just see a great player. He handles himself the right way and all that. But who is he really when you pull the curtain back and you're around him, where nobody's looking? And that's what makes him special; it's who he is when nobody's watching. Just really a great human being that just happens to be a good football player. And that's what I love about him.”

“No, there's no time. Our days are incredibly structured on game day, all the way until we literally get on the bus. We'll have a little walk through about 20 minutes before we get on the bus. And if you see any of it, it's just briefly when you're back in your room for a minute or two getting ready to go. But, no, we certainly don't play it on the bus. We'll be locked in on what we're trying to do and that's it.”