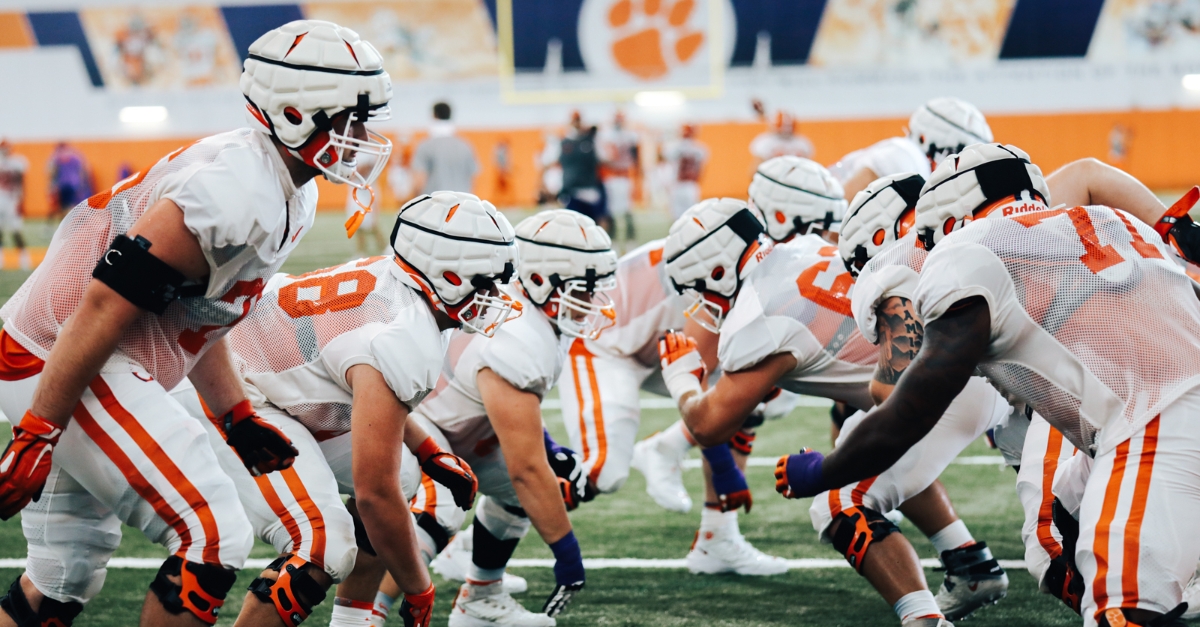 Clemson's second-team OL is long on talent but short on experience. (Photo courtesy of CU Athletics)

CLEMSON – Head coach Dabo Swinney is always full of optimism, so when he says there is a concern at a certain position on the field, you know he really is concerned. That position this season is the offensive line.

Clemson’s second-team offensive line, per the pre-camp depth chart, has two players listed at each spot. The only veteran of that group is Blake Vinson, who has missed most of camp and enters 2020 having played 113 snaps in 13 career games since a redshirt season in 2017. He played just 34 snaps before his season-ending injury in 2019.

Swinney was asked about his biggest concern heading into the season and he didn’t hesitate.

"Just our second offensive line," Swinney said. "We are young there. Building the quality, dependable depth in that second group. That first offensive line has a chance to be great. Same thing at quarterback, running back, tight end, and wide out. And at defensive line, we have a really good group there and good depth. Our 'backers, I don't think we've ever had a better group. Our back seven, we have guys banged up -- up a day and down a day, so getting everyone all back healthy is huge -- but the one area on our team is -- we are just different from last year from an offensive line standpoint."

That leads to youth up and down the depth chart.

"Really talented and guys are doing well," Swinney said. "Really impressed with what Mitchell Mayes has been able to do, Paul Tchio... Trent Howard is a kid that has really impressed us in camp. He just got here this summer and has really impressed us. Walker Parks. Blake Vinson (knee) is a guy we have been holding out of practice. He's been dressed every day, but we've been progressing him every day to get him full-go. We're hopeful that Blake will be able to go next week. Obviously that would be a big shot in the arm for us because he's a veteran player.

The Tigers are expected to start Jackson Carman at left tackle, Matt Bockhorst at left guard, Cade Stewart at center, Will Putnam at right guard, and Jordan McFadden at right tackle. Carman is the lone returning starter.

However, they need Vinson to step in and provide stability to that second group.

"But Blake, he looks solid so far,” Clemson offensive coordinator Tony Elliott said. “He's trying to get wind underneath him, gain his confidence. He's where you'd expect him to be right now. Next week is going to be a big week for him."

Out of the freshman, Walker Parks has flashed early in camp.

"Biggest thing I can say is I don't notice him in practice. Kind of like Mitch Hyatt, he's did his job in practice and I didn't notice him,” Elliott said. “We haven't called his name much because he's doing what he's supposed to do."