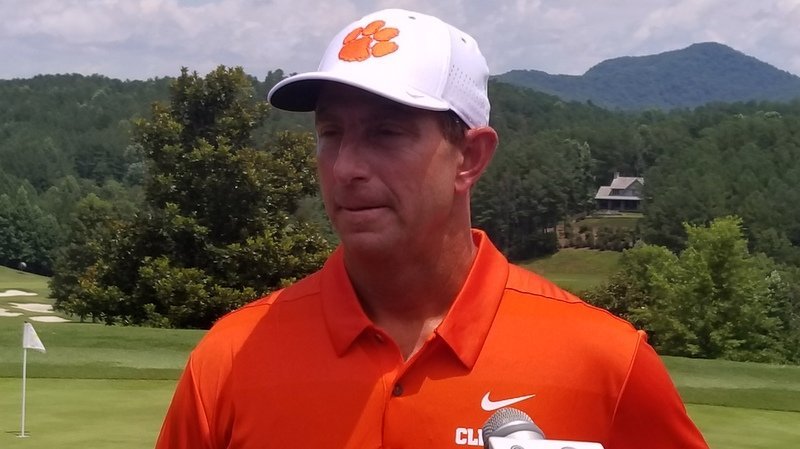 Swinney speaks to the media at his golf outing Tuesday

SUNSET, SC - Clemson head coach Dabo Swinney met briefly with the media before the start of his Tuesday media golf outing, and the major questions predictably centered around the veteran team and Tigers’ stacked defensive line.

The following is a transcript of his interview:

“Great to be out here. This is the official go time for us. We started as a staff officially (Monday). Getting back going. There’s a lot of enthusiasm in our building. Our players have worked hard this summer. That’s one of the things I do when I do get away for a couple weeks. I try to keep a pulse of the team in various ways with what’s going on and how they’re working and this team has been very focused. And we’ve tried to give them some breaks along the way too. That’s important. One of the things when they’ve come back from whatever break they’ve had, you could tell guys have continued to work. That is a sign of maturity and that’s a sign of the veteran leadership and guys understanding what it takes and also being committed to what it takes. To be in a position to get off to a good start for fall camp. I think we’re in a good spot there. But just anxious to get going.”

"I said after spring that I thought we had four guys that could compete to win this league with. Now we’ve got three because Hunter decided to move on. That hasn’t changed. How that’s going to shake out? I know how we’re going to start. Kelly is coming out of spring No. 1. He went into spring No. 1 and came out of spring No. 1. But the gap closed. We’ll see what happens. It’s a daily competition and a daily battle. I’m very confident in Kelly Bryant. I believe in Kelly. He can lead this team and has already proven he can do that. He’s so much better today than he was this time last year. The same thing with Trevor and Chase. I know neither one of them have take a snap, but based on what I’ve seen in our practices and our meetings and who they are as people, those guys will have an opportunity to compete. I don’t really have a timeline. It’d be great if all of a sudden (it was a) situation where you aren’t even asking me the question. Then again, it’s great to have a great competition too. I don’t know if I really have had a situation where I could honestly say that we could compete with three guys. That’s a good situation."

DL best he’s seen or been around

“We’ve got a long way from all that. They look good on all these preseason magazine covers. That part of it - they are really good-looking guys when it comes to that. They’ve got to go earn that. We’ll see. There’s a lot of great defensive lines - I’ve been around some great defensive lines at Alabama and great defensive lines here. Grady Jarrett would be the first one to (Dabo clears throat as Jarrett) and Vic (Beasley) and those guys. I think that they obviously have a proven track record. They’re dynamic. They’re great young people. Everybody talks about those four, but man, Albert Huggins - he’s in a position to really - he’s been one of those guys where it’s been a little longer to get the light on but man, I think he’s in position to be right there with those guys. We’ve got five guys that I think have a chance to be special. They’re ready to do that. Then that young group behind them. From a depth standpoint, maybe (best D-line ever) it’s a conversation. Whether or not when it’s all said and done this year if people want to argue, that’s going to be based on the performance. We’ll see.”

“Nah, that’s in the rearview mirror. We’re just trying to beat Furman. That’s really it. We move on from all that stuff and learn from it. That was disappointing at the time, but a lot of those guys on that team are not here anymore. A lot of them have moved on. It’s a new team. New challenges and accept the challenge of a new season. New journey.”

“Hopefully (it will help) a ton. It’s well-documented that this is the most veteran team that I’ve had. And I’m excited about that. Last year was the polar opposite. I embrace whatever challenge we have every year. I think that’s fun. That’s what makes college football so interesting. Last year we were a complete makeover on offense and really starting over. We spent the whole year (going) ‘Oh my gosh, how are ever going to score a touchdown?’ We’re good on defense. Whereas this year, it’s so different. I embrace that too because we do have all of these guys back who have been there and played. Hopefully, that leadership and that experience will bode well for us. I think it already has from what I’ve seen in spring ball and with what’s taken place this summer. And there’s a lot of things that you don’t see. And as coaches, we don’t see. But I know are just little things that our players are doing from a leadership standpoint, whether it’s an older guy taking young guys and coming back in the afternoon...on his own to work some drills and to teach. That’s the type of leadership that we have on this team.”

Mood around the team

“I think there’s going to be a ton of energy. In fact, I was just talking to Christian (Wilkins) driving up here and the guys are ready to go. They’re chomping at the bit to get started. We have a lot of veterans, but we’ve got as much competition as we’ve ever had. Everybody on this team, they know and they accept the fact that they have to go earn it. Nobody’s given anything and that’s just the culture that we have. That’s the mindset - very much workmanlike. There’s nobody that’s arrived. Everybody has to go prove it. I don’t care how many years that that they’ve started. Mitch Hyatt, he’s a very proven left tackle, but this is August of 2018. He’s got to prove it again. There’s that mindset and we have so much competition at every position because we do have good depth and have good experienced depth. And everybody is working hard to earn the opportunity to play. Everybody can’t start. But it’s not about starting. It’s about how you play when you play. That’s where we are and with that comes a lot of energy and a lot of enthusiasm. It will be exciting to get out and watch them in camp.”

“I don’t know how much of an advantage it is because everybody has the same opportunity...But I think it’s a great opportunity for us from a developmental standpoint. For every team (also)...You may have a guy that’s just not ready, but by the end of the year, man, this kid has really developed. He’s been through ‘Power Hour.’ He’s matured. He’s mentally in a different place. Boy, it’s really nice to say - ‘Hey, we’re going to be able to get you in a game here.’ The engagement from the redshirt guys will go to another level. We do a good job - guys that are redshirting, it’s hard, but we have a little plan and we talk about it every fall camp on how we’re going to keep our kids engaged. What’s our plan as a position coach if we’re going to redshirt this guy and what’s your plan weekly to keep him engaged. Just so there’s a steady progression. He doesn’t feel like he’s not a part of it. I think (the new rule) really helps because a guy knows he has a chance to get in the game.

"You’re still limited what how many guys you can travel with on the road (72). You’ve got decisions to make there…Clelin Ferrell is a great example...We got to the point where we were going to hold him (his freshman season coming off a torn ACL) and held him all year. Then we got down to the Orange Bowl and Shaq (Lawson) got hurt and we had Austin. Cle could have helped us. He was ready. But we would’ve lost a whole year at that time. It’s nice to have that kind of flexibility late in the year due to injuries. Which I think is a great part of this rule. Guys get hurt and you want to have more options. I think another part is sometimes guys not playing bowl games or to have to play a guy in one game and lose a whole year - that’s not fair to the player. I think there’s a lot that drove us there to the decision, but I think it’s a great deal for all of us involved. It gives us a lot of flexibility week-to-week and year-to-year as we develop the team.”

“First of all, we can hold them accountable to eight hours a week mandatory. You best believe they’re held accountable to that. Not too long ago, everything we voluntary in the summer. You couldn’t punish somebody. I don’t know if y’all remember this but I punished a kid because we were having some academic issues. I made him come at 5:30 in the morning and we went for a two-mile run. The next thing I know I’m in USA TODAY. You mean I can’t make a guy go to class? We’re paying for class. Those days have changed. We can hold them accountable in the summer, which is great. Joey (Batson) and his staff do an unbelievable job with that. But there’s only so much (we can do).

"There’s an 8-hour rule. That’s all your workouts and running and stuff. It really becomes imperative that guys go above and beyond on their own. All of our skills and drills are player-led. Our guys - that’s just the culture that we have here. It’s passed on through our years here. This is what we do. This is what it takes. You have the young guys become older guys that carry on the tradition. It’s important. They do a great job and we’ve had a great semester academically. Summer I was a really, really good academic semester. So hopefully we’ll finish strong this summer too.”