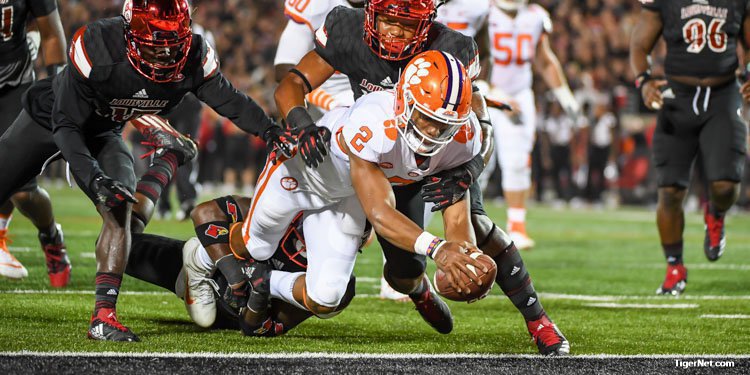 Clemson enters the fourth week of the season ranked second nationally, with two Top 15 wins and the kind of national respect reserved for the bluebloods of the sport.

But head coach Dabo Swinney says this team isn’t close to being satisfied and he’s excited to see what the rest of the season holds, and while he isn’t completely sure what his team will be at the end of the season he knows he has the kind of depth most coaches can only dream of seeing.

“I think what I had early on was a hungry team. I said that to the local guys here a couple of times,” Swinney told the media during his Sunday teleconference. “We're such a new team and have so many new people. We do have enough leadership and experience to guide us, but we've got so many new guys where I was anxious to see how they would respond. Right now, we are a close team. These guys like each other. They're hungry. They pull for each other and practice the right way. We have that type of depth that you dream of as a coach. We've got some guys paying attention to detail, taking pride in preparation. I like our team, I like the makeup of it.”

Clemson defeated Louisville 47-21 Saturday night, and Swinney said that there are things his team can do better.

“We had a chance to kind of review everything today. I'm really proud of our team and how they competed. I love the mental toughness that I saw,” he said. “It was four quarters of football. We have three games under our belt and another big opportunity this week. We have a lot of positives but believe it or not there is so much we can do better. You see that when you watch the tape, too. A lot of things we can teach from so that we can improve our team. There are a lot of areas where we can improve in.

"Defensively we played a great first three quarters outside of one bad drive. We had seven sacks and 11 tackles for loss. We played everybody that went defensively. I loved their effort but we did have a couple of busts in the fourth quarter. We have a lot of little things we need to correct. We had some mental errors and missed tackles. We went against one of the best offenses in the country. It was a very good defensive performance, but not perfect. Excellent job on the road.

"Offensively, just being able to run the ball is really what makes us go and it creates the explosive plays. I'm really pleased with what we did on third down. We were effective in the red zone and got our play count where it needs to be.”

“He's just growing up right before our eyes. We missed a few plays but he led our team very well. A lot of good things. We did have three sacks, two on the line and one on a back. We had a couple of critical penalties, too. To me right now the area where I'm so pleased is special teams, our punt team. Ray-Ray is doing a great job. Our kickoff coverage is great. It was good to see Greg Huegel hit a career-long last night.”

"Injury-wise we came out of it pretty good. Hopefully, we'll get Marcus Edmond back here soon. D.J. Greenlee it will probably be out for a little while, it looks like a sprained MCL with him.

"Players of the game were Kelly Bryant and Ray-Ray on offense, Dexter Lawrence and Dorian O’Daniel on defense and Jalen Williams and Will Spiers on special teams.”

"Offensively we kept the ball away from him. Just great effort. Guys were ready to play and they played hard. We didn't give him a short field. We wanted them to execute all the way down the field. We won the turnover margin and that was important. Last year we ended up playing 105 snaps and we had five turnovers. This year we mixed up our coverages more and used more zone. Now, we missed some tackles, too. He's a great player."

Success on the road

What he’s seen out of Boston College

"Not a whole lot. We don't look ahead around here. I did see them a little bit on television against Notre Dame, just maybe 30 minutes worth. I'm very familiar with them. We see them every year. They're a tough, hard-nosed team every year. That's the personality of their coach. We've had to battle them many times. It's time to put another plan together. I'll know a lot more in the next 48 hours."

The play at right tackle

“We played better there. (Sean) Pollard did have one sack on our quarterback. A guy came underneath on us after we overset. (Tremayne) Anchrum came back and played a good game for us. They're just true sophomores. I think Anchrum graded 90-percent and Pollard was right at it himself. Both did a nice job."

Not being ranked No. 1

"I couldn't care less. That stuff is so irrelevant. We're just trying to win this game this week. It's September. I don't know why they do polls in September. We have to demonstrate that we will stay focused and not get distracted. We have a huge schedule ahead of us. Y'all have heard me say many times we don't pay attention to that stuff. It matters in November and at the end of the year."