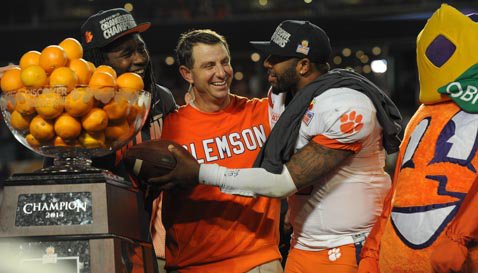 Swinney said wins like the one over Ohio St. have improved the league's image

Four weeks from today, the ACC media will convene in Greensboro for the annual ACC Football Kickoff, conducting interview sessions with two players and the head coach from each school. This year’s ACC Kickoff will probably have wall-to-wall local and national media– Pitt and Syracuse were added to the mix last season, and with Notre Dame and Louisville beginning ACC play this season, attendance should be at an all-time high.

But does that mean the ACC is better? Clemson head coach Dabo Swinney

Dabo Swinney
Head Coach
View Full Profile thinks so, and he said recently that he has said for years that all the ACC needed was for one team to jump up and have a great season, something that happened when Florida St. went undefeated and won the national championship last season.

“They went out and earned it on the field last year,” Swinney said. “I was really happy for Florida State, proud of them for getting it done. We take pride in our conference as well. It’s great to have a national champion in our conference and to have two BCS winners. I think that’s only happened maybe one other time. It was a good year for the ACC, and certainly Florida State has set the standard for all of us.”

Swinney said that Florida St.’s win over Auburn in the title and Clemson’s wins over LSU and Ohio St. in recent bowl games and the win over Georgia last season in the opener have shown that the ACC can play with the nation’s elite.

“There is no doubt. People have said for several years, ‘What does the ACC have to do?’ But the ACC was winning and we were producing a lot of good teams so we were just kind of beating up on each other and there was just a lot of parity,” Swinney said. “Really, there just weren't any dominant teams. That is what you see in the SEC - every year it just seemed like there was always a 12-0 team or 11-1 team and we just had not had that.

Clemson will get an up close and early look at the improved ACC this season – the Tigers travel to Tallahassee to take on Florida St. on Sept. 20th, then come home to host an improved North Carolina team on Sept. 27th. Continuing the part of the schedule that could make or break the season, the Tigers host N.C. State on October 4th and Louisville on October 11th.

“I think North Carolina is a team that is really improving vastly. I think Miami is on their way back under Coach (Al) Golden, and he has done a great job down there,” Swinney said. “I don't see the ACC going backwards, I think we are just going to continue to improve. And with Louisville coming in, here is another team that has played in a BCS game in the last two years. I think it is an outstanding football conference that is just going to get better and can compete. If you look at the NFL Draft, the SEC had 49 players drafted and we were second (every ACC school had at least one player selected, led by Florida State with seven) with 42 or so. So this is just a great football league that is on its way.”