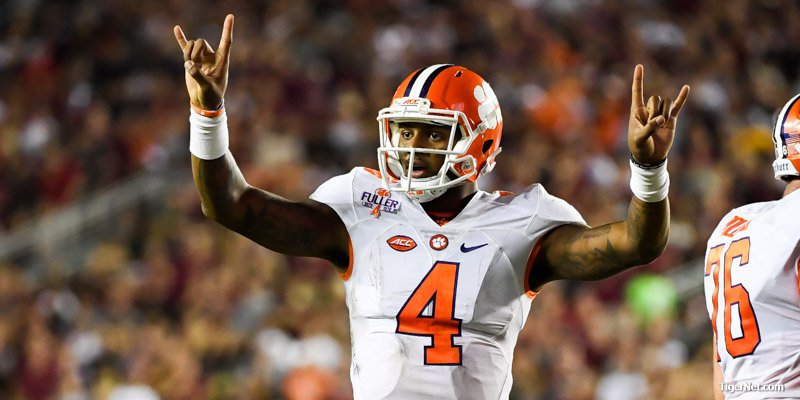 Swinney said he never wanted to Clemson to have the air raid offense.

CLEMSON – There’s been concern from the Clemson fan base that the Tigers’ offense isn’t running with as much tempo as it has in year’s past, but head coach Dabo Swinney says that's just not the case.

When Swinney was looking at offensive coordinators five years ago, he hired Chad Morris from Tulsa to bring in a hurry up, no huddle, spread offense to take Clemson to another level.

Of course, his decision was met with criticism about how the hurry up style would affect Clemson’s defense and Swinney told the naysayers, to give him time.

"Back then, everybody was telling me we were going to stink on defense. You might have asked me that question back then – I don't know, a lot of y'all – and it was a good question. It wasn't a bad question,” Swinney told the media during his Tuesday press conference. “I just think that the narrative back then from the other side, the dark world, the old school, 'How dare you change some games or philosophies or whatever' was: You'll never win a championship with that type of offense. You'll never be good on defense. It was just assumed you were going to be terrible on defense. And I don't hear that anymore.

"And my message back then was, 'I don't think we've got enough data to say that.' That was exactly what I said. 'Let's just wait and see. Let's look and see two or three years down the road and see if there's some data to support that. People just love to throw these theories out there without any data. Or they might have a very small pool of data and just paint with a broad brush.”

"It really hasn't changed much, to be honest with you,” Swinney said. “We still try to play with great tempo. I think we had 84 gradable plays the other night, 81 countable plays I guess. We strive to get 80-plus plays. That's what we're shooting for. Sometimes games dictate different things based on if you get leads or whatever, or in certain situations we slow it down.”

"Yeah, we still want to take advantage of the matchups. We want to make sure that we get into the best play and certain things like that,” he said. “To play that fast, you've got to have some packages. You're trying to force the defense to be a little simpler. Because you don't have a lot of time to make a lot of exotic calls. Because defensive football: 'Where's the strength? What's the formation? OK, they're snapping the ball. You better have a call. You better give yourself a chance.' So it forces defenses to have to simplify a little bit. So now all of a sudden you've got some packages built in and there's no substitutions, there's no receivers flipping sides, here we go, no motions. And you're playing the game of what's on top and what's in the box.

"They're two safety and covered down outside, hey we're running the ball and it's probably a zone-read concept and some type of run-pass option built into it in case they do trigger on the snap. Because there's a pre-snap and a post-snap read that has to take place. But the ball isn't being held. It's coming out. So you're protecting yourself against sack opportunities. And that's how you play fast like that. And they do a tremendous job with it. But you've got to have a quarterback, and you've got to have good skill."

However, the Tigers won’t sell out and become an air raid offense because to win championships Swinney said you have to be able run the football.

“I think the game has changed in a lot of ways. But at the end of the day for us, we love tempo. But we're not, and I've never wanted to be, the Air Raid offense,” he said. “That's not who we are. We want to run the football. Very rarely do we not have a two-back presence with a tight end in the game. You hardly ever see us in 10 personnel. We always have the ability to have that two-back mentality and presence. And then with what we do with our quarterback, too, it presents a different run-game opportunity. So that's what we do, and we've been pretty good at it. And the flip side of it is, we've been really good on defense. We practice tough. We practice good-on-good. We train tough. We're built from the inside-out. We're built for the trenches. And that's why we've been successful."