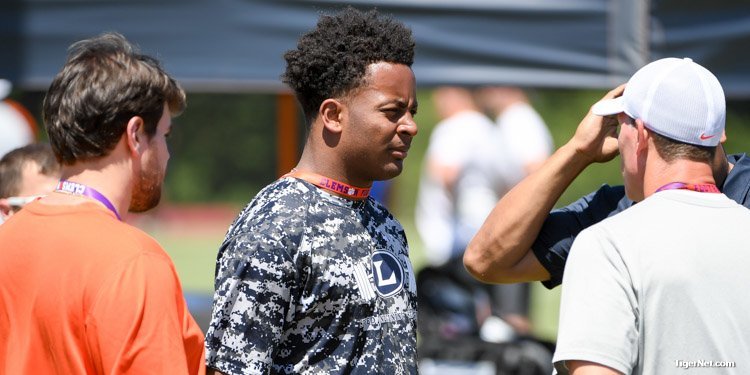 CLEMSON – We just got back in from the second session of Dabo Swinney’s high school camp and have plenty of intel and nuggets to pass along from both of today’s session.

The earlier featured many of the top prospects we watched this morning but we have plenty to add to this afternoon’s notes.

Arriving a few minutes after the start of camp was high 3-star linebacker Nick Jackson of Atlanta (GA) Lovett. The 2019 prospect has said that Northwestern, Virginia, Vanderbilt, Duke, Texas A&M, NC State, Clemson, Nebraska, Wake Forest and Georgia are the programs recruiting him the hardest right now. Jackson has drawn offers from all of those programs except for Clemson and Georgia.

Jackson walked into the camp with one of Clemson’s staffers and immediately reported to defensive coordinator and linebackers coach Brent Venables. Venables quickly disengaged from his group and started a lengthy and animated conversation with Jackson, who did not work out.

*Another offer waiting to happen is 3-star Lawrenceville (GA) Archer defensive back prospect Jalyn Phillips. Phillips and his family were getting a tour from recruiting staffer Tyler Clements. Phillips has Clemson in his top group despite the lack of an offer.

He has all the makings of a prototypical “9-man” receiver at Clemson.

*Speaking of receivers – the head coach sent Scott packing and spent a long time coaching the A group of receivers. It’s always fun to watch Swinney put away the mantle of CEO and get back to his grass roots of coaching the receivers. Several of the youngsters were more than a little wide-eyed at seeing a coach who has won a National Championship give them 1-on-1 instruction, but Clemson commit Brannon Spector drank in every word.

*Injuries begin to mount in the heat – newest Clemson commit DeMonte Capehart had a bag of ice wrapped around his upper thigh, and Cooper Dawson had a splint on his left leg after working out.

*Ran into Amari Rodgers’ coach from Knoxville Catholic, and he said he always knew Rodgers could be special. He said Rodgers was the first one in the weight room on Saturday mornings and as his work ethic increased his grades began to go up. Catholic brought two more receivers to the Clemson camp, including a 2022 kid named Tommy Witton that spent time in both sessions with the first group.

*Another big-time visitor Wednesday was 2020 4-star OG Justin Rogers of Oak Park (MI). He didn’t work out. Rogers has offers from all of the big-time programs including Alabama, Clemson, Florida, Georgia, and Southern Cal.

*At tight end, Calhoun (GA) Davis Allen, a 2019 prospect, stood out. He has offers from the likes of Ole Miss and Virginia Tech, but his offer list will only grow.

*Drawing plenty of attention from running backs coach Tony Elliott was Duncan (SC) Byrnes 2020 running back Rahjai Harris. Harris was the best of the running backs group and we’ve heard the Clemson interest is strong.