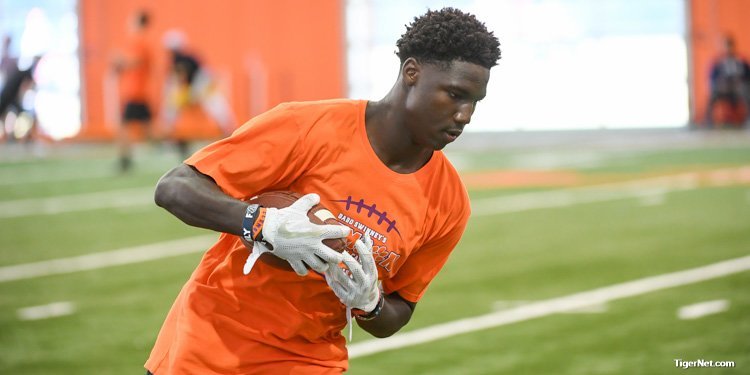 Davis Beville throws under the watchful eye of Brandon Streeter

A host of top prospects were on hand for Wednesday morning’s session as much of the top talent begins to roll in. There will be a bevy of one-day campers on Thursday and next week there will be even more talent on hand.

Wednesday, however, wasn’t bereft of talent and I will start with the wide receivers group and Julian Nixon. Nixon is a 2021 prospect out of Roswell (GA) Centennial. He’s just a freshman, but already has ten offers on his ledger – Auburn, Florida, Florida St., Georgia, Louisville, Ohio St., Ole Miss, South Carolina, Tennessee, and Troy. The one school that he is interested in that hasn’t offered? Clemson, which doesn’t dole out offers to rising sophomores very often.

Nixon is 6-4, 205 and has an incredible wingspan. His position coach at Centennial is Lyn Marsh, who coached Deshaun Watson at Gainesville. I called Marsh after the session and Marsh, who knows young talent, said, “He’s all that and a bag of chips. His potential is unlimited and it’s hard to believe that he’s just 15.”

*Notables with the offensive line today: 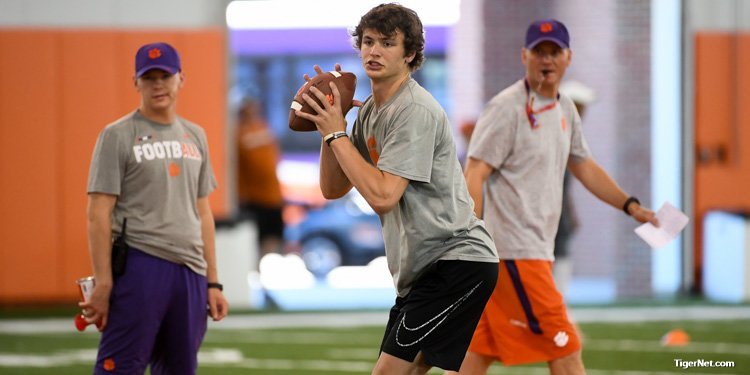 Davis Beville throws under the watchful eye of Brandon Streeter "

Offers from Clemson and Georgia – where he recently attended camp – could be game changers.

*At 6-6 and 270-pounds, the camp circuit should give Chester (SC) offensive tackle Wyatt Tunall plenty of opportunity to turn heads and show what he can do. Currently, his only offer is from Troy.

*2020 Barnwell (SC) offensive lineman Briggs Kearse grew up a South Carolina fan, but once his recruiting starting taking off all allegiances went out the window. Area recruiter Todd Bates stopped by Barnwell twice during the spring evaluation period to show Kearse Clemson’s interest and the 6-3, 300-pound prospect reciprocated by setting up a visit for Swinney’s camp.

*Recruiting for 2020 Canton (GA) Creekview offensive lineman John Williams exploded this spring as he picked up offers from Maryland, Ole Miss, North Carolina, N.C. State, Tennessee, Virginia and Wisconsin among others. Williams is making his rounds on the camp circuit this summer but currently doesn’t have any favorites.

*Despite being a 2021 prospect, Jesup (GA) Wayne County offensive lineman Weston Franklin is already garnering plenty of attention. He caught the eye of several media members at The Opening Regionals earlier this spring and as already picked up offers from Southern Miss and Michigan.

*One notable from the linebackers group is Jacksonville (FL) Bishop Kenny linebacker Bryce Mullinex. Mullinex (6-1, 220) worked with the defensive coordinator Brent Venables’ during most of the morning session. Mullinex missed most of his junior season with an injury and hasn’t drawn an impressive list of offers as a result, but he looked the part Wednesday. But, and this is a big but, his father played with Swinney at Alabama, so he has ties to safety coach Mickey Conn, Thad Turnipseed, Lemanski Hall and others on the Clemson staff.

Julian Nixon is an impressive freshman

*2019 quarterback Davis Beville out of Greenville (SC) threw in the morning session. He was accompanied to camp by his father, former Clemson player Scott Beville. The Tigers have seen three quarterbacks leave the program since January and added Ben Batson to the scholarship list a few weeks ago. Beville was watched by quarterbacks coach Brandon Streeter and former quarterback Cole Stoudt, and there’s no denying his arm talent. It will be interesting to see what the Clemson coaches tell him after this visit.

*A late arrival was 3-star safety/wide receiver prospect Justin Robinson out of Eagles Landing Christian Academy down in Georgia. He’s listed as 6-4 but is taller than that, and when he first arrived I thought he would head over to the defensive ends. He met with Venables, who sent him to the safeties group. He’s raw, but the athletic ability is there. Recently offered by Boston College.