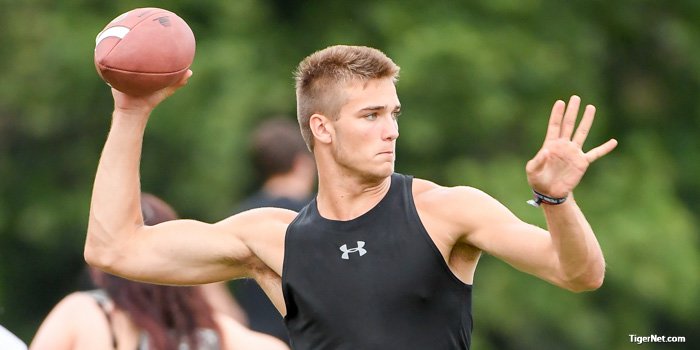 CLEMSON – Session two of Clemson head coach Dabo Swinney’s high school camp took a break from the heat, but the quarterbacks brought their own fire.

The evening session of day one was held under cloudy skies with temperatures in the high 70’s – perfect weather for a football camp. As we were walking in, I noticed several of the college coaches that are working the camp taking the time to stop and take pictures in the road win graveyard outside of the indoor practice facility. Even coaches can be fans.

On to camp and what we saw and heard:

*Defensive coordinator Brent Venables and defensive line coach Todd Bates were watching 2019 defensive tackle prospect Jacob Lacey. Lacey was doing drills with current tackle Albert Huggins and former tackle Miguel Chavis. It was obvious that Venables gets into each and every drill, and even though he was merely a spectator, he moved his shoulders and hips with each movement as if he was doing the drill.

At one point, Venables told Huggins to, “Get in there and show them how to do the drill, Albert. A picture is worth a thousand words.”

It also afforded me the opportunity to finally watch Bates in action. I’ve gotten used to former line coaches Marion Hobby and Dan Brooks over the years, and it’s immediately obvious that what the players told us during the spring is true – Bates is different than both.

He looks like he enjoys the teaching process, and he’s very hands on and doesn’t mind getting down in a three-point stance and showing prospects how things should be done. He’s also very intense and focus, and it became obvious right away that he’s a perfect fit for this staff.

As for Lacey – I like him a lot and he comes from a good family. His brother is at West Point, and his dad has played and coached. Lacey only recently finished playing baseball – he plays right field, left field, first base and designated hitter. If you’re gonna be a right fielder – especially a 300-pounder – you have to be able to move. He can move.

*Chris Shearin is a 2019 cornerback prospect out of Suffolk (VA) King’s Fork. His only offer is from Virginia, but that will change as he continues on the camp circuit. Shearin has good explosiveness, catches the ball well and is smooth in change of direction drills.

*I got word that the staff received a call a few nights ago from Hawaii asking if there was room in the camp for another quarterback prospect. When the caller was told that walk-ups were accepted, one dad from the Aloha St. put his 15-year old son on the plane and sent him to Clemson, just so he could be a part of Swinney’s camp. The youngster, Zach Johnston, made it and worked out.

*Running backs coach and offensive coordinator Tony Elliott was watching quarterback drills and he pulled one of the quarterbacks to the side and he immediately started out the lesson with, “The thing Deshaun Watson did best….” It helps when you can point to a Heisman Trophy finalist who won the national championship and was drafted in the first round to teach young kids the right way to do things.

*Elliott also got on the current Clemson players who are coaching about not moving fast enough between drills. One player tried to say he was leading his group by making sure they all knew where they were going. The player said, ‘But coach, you always say a sign of a good leader is making sure your people know where they’re going.’ Elliott just shook his head and kept walking.

*Tight end Milan Richard does an excellent job with the young tight ends. He’s very good at explaining drills and he also tells the campers (and even the coaches) when they should use the play. He’s found the right balance of praise and constructive criticism.

*I spent time once again with the quarterbacks, and I was really impressed with Hewitt-Trussville (AL) 2019 prospect Paul Tyson. He has a great release, and it’s smooth. And, like I said in the earlier story about the afternoon session, both 2020 Myrtle Beach (SC) QB Luke Doty and Charlotte (NC) Charlotte Christian QB Garrett Shrader are both impressive.

Shrader just has that size you like, while Doty just looks like a gamer. Both seem very polished for their age (it’s easy to tell the ones that have had good coaching).

*Finally, a nugget about Clemson’s quarterbacks. I asked someone who watched almost all of spring practice which quarterback impressed him the most, and he said Hunter Johnson. He said Johnson hates to fail, and is constantly wanting to know not only what he did wrong, but why, and the he fixes it. He said don’t be surprised if Johnson is the starter by mid-season.