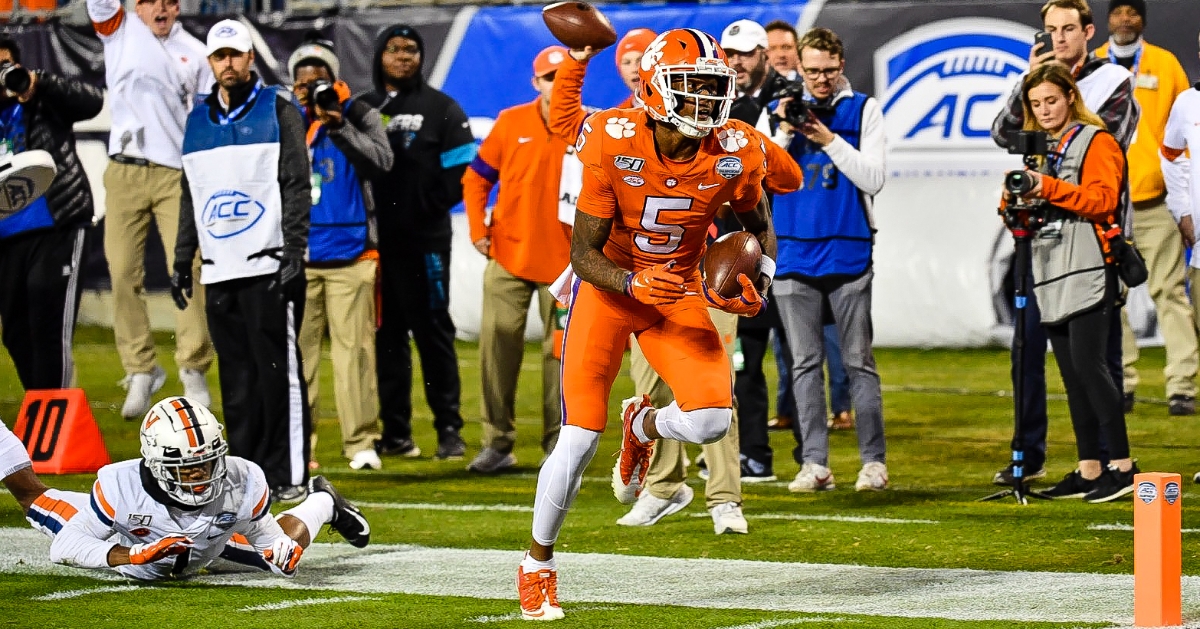 CHARLOTTE, NC – Clemson is known as Wide Receiver U because of the large number of quality wideouts produced, and it’s time everyone recognizes that Tee Higgins’ name belongs alongside the best receivers to ever play for the Tigers.

Higgins increased his career touchdown total to 27, which tied Deandre Hopkins and Sammy Watkins for the most in Clemson history. Higgins moved into the Top 10 among Clemson receivers in career yardage. He has amassed 2,363 yards, including 1,082 this season. He became the first Clemson receiver to catch multiple touchdowns in three consecutive games.

An already-great receiver is getting better, but head coach Dabo declined to give Higgins the game ball.

“This guy right here, we've had a lot of great wide-outs come in here, and I think he had 9 for 182, and the record, career record 27 touchdowns in his career, and that ties Nuk and Sammy,” Swinney said. “Those guys were pretty good, so just pretty amazing.

“I told him I'm not giving him a game ball. The next touchdown he gets, he's going to get a game ball. He'll stand alone. So, I'm just really proud of Tee and what he's done.”

Higgins, in typical fashion, said he wasn’t worried about the numbers.

“First of all, it's a great accomplishment just to be up there with those top two guys, and for our receiving room, we just go out there and just play,” Higgins said. “Don't worry about the stats. One guy is doing good, we're going to congratulate him and just keep going.”

After his second touchdown reception, Higgins stayed on his back and appeared to soak in the moment as the crowd roared in appreciation.

“I don't know, I just felt -- it was just great. That second touchdown, I don't know why, but I just enjoyed that one the most, simply because I knew I was close to getting the record, but I never knew if I was going to go back in the game or not, so I just enjoyed it,” Higgins said.

At that point Swinney jumped into the conversation, saying, “I'll guarantee you his mama wasn't soaking it up. She was hooting and hollering and going crazy in the stands, I guarantee you. She was having a ball up there with his sister, I'm sure.”

Swinney then went on to say that Higgins arrived at Clemson as more of an athlete than a receiver, but hard work has resulted in his name being added to the list of Tiger greats.

“Well, he was more of a basketball player when he got here. He was a great high school player, jump ball guy, run down the field, throw it to him. He was Bony Maroney,” Swinney said. “He was about -- he was probably 180 pounds, maybe, when he got here, and now he's about close to 215. So he's just worked his tail off and developed physically, had a lot to learn from a technical standpoint about the position and things like that. But he's just put the work in.

“Such a joy to coach. And whether Tee gets one ball or 10, he doesn't care. These guys are selfless, and they're happy for their teammates, and they set an example for everyone, and when your best player has such high character and humility and great respect for how you have to work to prepare week in and week out and then they set that example, I mean, it just makes my job easy.”