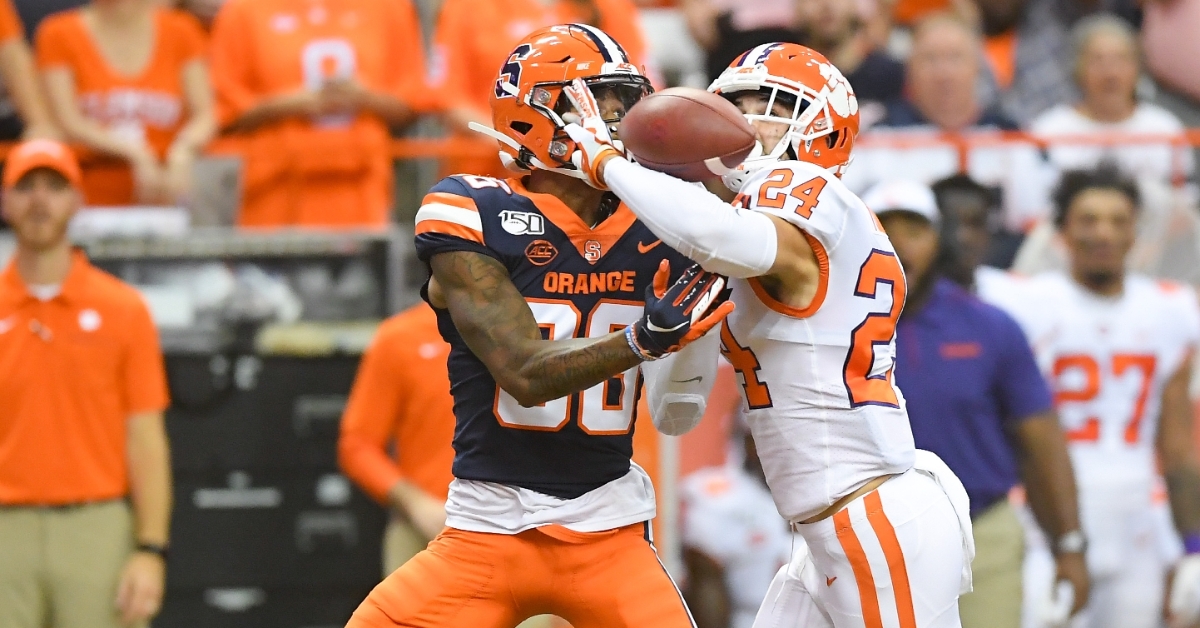 Nolan Turner defends a pass during the first half

Clemson’s defense is still a work in progress, a scary proposition for future opponents, but will they continue to bring pressure from all over the field? Stay tuned.

Head coach Dabo Swinney held his Sunday teleconference with the media following the Tigers’ 41-6 throttling of Syracuse and said he was pleased with a defense that held the Orange to just 187 total yards.

"Defensively they set the tone, did an awesome job. They dominated up front,” Swinney said. “Great job on third and fourth down and red zone defense. We got eight sacks and 15 tackles for loss. So pleased with the positioning of our defense. We only gave up three big plays and those were very correctable. We probably could have had double-digit sacks. Just so proud of them. They're playing with a lot of confidence, effort and fundamentals. We're still a work-in-progress, but I like what I am seeing. The back-seven guys are doing an awesome job. A lot of guys got a chance to play. We played about everybody we took defensively.

"Offensively, explosive but we have to be more efficient at times. I'm proud of how we protected our quarterback. We only had five negative yards. It was good to see Amari Rodgers have a game like he had. We had 612 yards of total offense and again a lot, a lot that we are still leaving out there. There are plays to be made that we feel like we can make. We just weren't very good on third down and had some turnovers. Our receivers, a lot of yardage after the catch. I believe it was 180 yards after the catch. Four out of our five scoring drives were 70 yards or more.”

The Tigers improved to 3-0 following the first road game of the season.

"As a team, the experience of going on the road is good for us. We are 3-0 in our first quarter,” Swinney said. “We're ahead of where we were this time a year ago. We've been challenged more, too. We're not a championship-caliber team now, but I don't know anyone that is in September. I like how we are improving. Injury-wise, we're in good shape. Several guys are banged up but nothing major with anyone. Getting Amari back has been a huge shot in the arm for us."

The Tigers were far from perfect, however.

"Oh sure. We jump off-sides. We got beat on a post-route one time. We had two or three times where we didn't fit it right and their quarterback got outside,” Swinney said. “There is so much that we can correct. Offensively, same thing. Explosive but inefficient. Too many three-and-outs. We were poor on third down. We just didn't make some plays consistently. Maybe it was making the right throw, penalties, finishing a block or finishing a play.

"We've still been able to dominate and you think that's all good, but it's not all good because there is still a lot to improve on. I'm excited about our opportunity as a team if we will stay hungry about improving. Details, technique, fundamentals, efficiency, lots of football details that will help us."

Swinney said corner Derion Kendrick, who left with a back injury during the first half Saturday, should be fine.

“I am so proud of Jackson. He has done a heck of a job for us. He had one of the highest grades on the team this past week. We know more after these first three games that will help us as we get into the second quarter of our season. He has been a huge bright spot for us. Y'all heard me talk about him in camp. He is playing fast, physical, he's really smart and takes a lot of pride in his job. It is amazing how far he has come in a year. Buy-in, maturity, you name it. It's fun to see where he is. He's a heck of a guy who's off to a great start.”

Will the defense change its look during the season?

“I'd say stay tuned. We're a week-to-week deal around here (schematically). You never know what you're going to see."