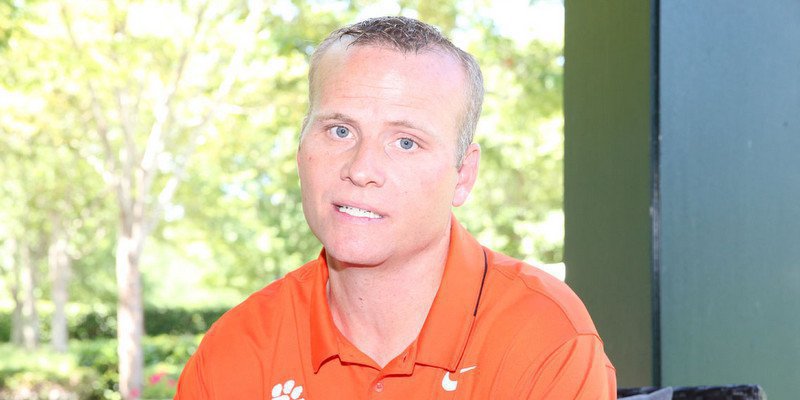 Streeter says the best player will win the QB job

SUNSET, SC – Clemson quarterbacks coach Brandon Streeter fielded all the tough questions at head coach Dabo Swinney’s media golf outing Tuesday at The Reserve, and the big takeaway is that both Trevor Lawrence and Kelly Bryant will play this season.

Bryant is the returning starter who led Clemson to an ACC Atlantic Division title, an ACC Championship and a berth in the College Football Playoff. On his heels is Lawrence, who has all of the talent in the world but lacks game experience.

Many believe that the coaching staff will simply go with Bryant – he’s the experienced hand and a senior. Some believe that Lawrence has the talent to take over from the start. Streeter says both quarterbacks will play and to anoint Bryant as the starter because of seniority would be foolish.

Streeter says Swinney has said repeatedly that the team will know the identity of the best quarterback and to go any other direction would be counter-productive.

“We’re all on the same page. You’ve got to earn it. That’s what he’s talking about when he says you can’t anoint somebody too early,” Streeter told TigerNet. “Trevor went through 15 practices and did a great job. He’s got tons of talent. He’s going to be an incredible quarterback, there’s no doubt about it, but we do the kids wrong sometimes if we give them the job before they really earn it. Now, he very well could earn it before the first game, I don’t know.

“Kelly has earned it in his performance on the field and in practice and as a leader and with his experience, so he’s already earned it. Trevor is in the process of earning that right. I think that’s how you have to look at it, but he has the opportunity this pre-season camp and as the season goes. I don’t know how it’s going to end up. I wish I did. I’m as excited as y’all are because I’m excited to watch this thing unravel. The reason I’m so excited is that I have a great group of guys and they’re all going to contribute in their own way, so that’s what’s special about it.”

Streeter was asked if he has confidence that Lawrence could win on the road at Texas A&M (if he wins the starting job) and he said yes.

“There’s no doubt that he has the demeanor and the poise and confidence in those situations. I don’t know if you can ever put yourself in exactly that situation, but the spring game he had poise,” Streeter said. “He made big plays. He made plenty of mistakes in the spring game that people don’t realize either, Trevor did. He wasn’t perfect by any stretch. None of those guys graded good. It was not a good day the next day. Nobody knows that until now. You saw that he has the poise. Then in those big games - ESPN games - in high school, he’s had this media attention since 10th grade. He’s been able to push things aside that he can’t control and he’s done a really good job of that. He’s not going to ever be perfect but he’s the type of guy that has poise in those big situations, just like Kelly does and Chase does. Chase shows so much poise is so many different ways.”

Bryant ended last season with a desultory performance in the Sugar Bowl loss to Alabama and didn’t put forth his best effort in the spring game, and Streeter said that Bryant has to find the swagger that helped leaded Clemson to an ACC title.

“Like a lot of quarterbacks, their performance is based on their confidence level. Kelly learned some things from that Alabama game and that’s one of the biggest things he learned is how to - you’re going to make mistakes but you can’t have bad body language or hang your head even though it’s a tough situation,” Streeter said. “He struggled in the Bama game in a couple of things. He struggled in the spring game missing some throws that he doesn’t ever miss. I think, if anything, it was a great learning experience in hindsight. He was able to learn how to handle those situations to where, ‘Hey, when it goes bad, you’ve got to find a way to bounce back.’ We do the best we can as coaches to try to help with that but it has to come from within and he knows that. He’s a positive guy and handles himself with confidence but if his confidence is down, he’s got to be able to keep his head up and rally the troops and continue to march forward.”