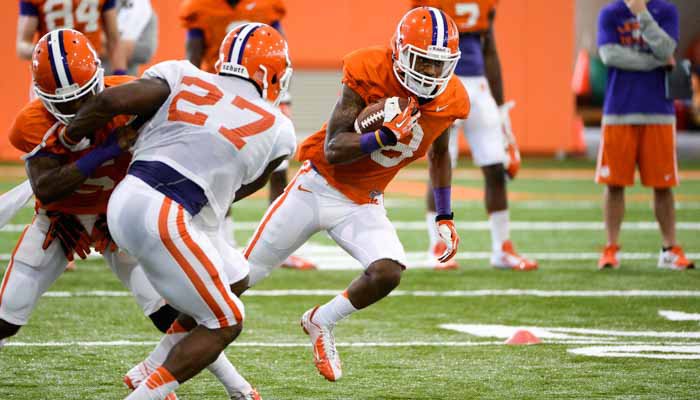 Cole Stoudt
Sr. Quarterback
#18 6-4, 231
Dublin, OH
View Full Profile says there isn’t a cause for concern. In fact, he thinks the offense has the potential to be even better this season because of the number of playmakers that surround him.

Jadar Johnson
So. Defensive Back
#18 6-1, 207
Orangeburg, SC
View Full Profile on the second play – but Stoudt said the offense found its footing and knows what they need to correct.

“We started out slow but we picked it up and the offense made some good plays out there,” Stoudt said after the scrimmage. “We have some things we have to correct but all in all a pretty good day. We’ve been doing a good job of fixing the things we’ve been doing wrong, and today we got a little bit better. It was just one of those days where it started off slow, but we know what we did wrong and we know how to get that energy back. We picked it up right after those first two bad series, and we picked it up from there and made a few plays.”

Most of the preseason talk surrounding the offense centers on the loss of playmakers in Tajh Boyd, Sammy Watkins

“It’s the same thing every single year. People have to realize that we lost some good guys heading into last year, and it’s the same thing this year,” Stoudt said. “We have more guys this year, and that is something that is going to be a shocker for a lot of people. They are all looking at the negative side of our offense, but we have a lot more positives. Yeah, we lost Sammy and Tay and Tajh and some guys on the offensive line, but we have more depth than we’ve ever had. We are using more and more guys. We are still going to be an explosive offense and we are still going to be one of the best. We are going to go out there and do what we do, and that is get in the endzone. We are going to be fast. “

On the slow start

“Honestly, it’s just our mentality going into the day. The long week, I feel like some of the guys were lackadaisical going onto the field today. We came out and bounced back and made some plays. We’re not going to hang our heads on that. We definitely have to bring the focus this next week and start scheming on Georgia.”

“Both of those guys are working really hard and it’s great to see that competition. They are both making some great throws and it will be fun to see what becomes of having both of those guys in the backfield.

We have improved our consistency on deep balls. Earlier in the summer that was one of our main points was to go out there and work on our fade balls. We have continued to work on that and I think it has improved throughout fall camp.“

On the freshmen receivers

“I thought the freshmen receivers looked really good. They made a few plays downfield and it was good to see those guys do that. That is one of the big question marks for this year is replacing those guys we had last year, and making plays down the field and on the deep ball. Today Kyrin (Priester) and Demarre (Kitt)and Artavis (Scott) made some plays down the field.”

“It will be great to have him back and have another playmaker out there on the field. I’ve known Charone since kindergarten, and we talk every day. I think he is just ready to get back out on the field. He should be ready to go pretty soon.”

On the success of the defense Saturday

“We just had some fun out there today. We fooled around and made some plays and did some good things today. We took a step forward, but we have a ways to go. We still have some time. We have had a good camp, but we are just trying to compete and get better every day. The key is us working together and playing together. We have to correct us and then we can concentrate on Georgia.”

On preseason accolades for the defense

“That’s the reason its preseason. Nothing is said and done until December. If we are there in December then we definitely earned it and that is where we want to be.”