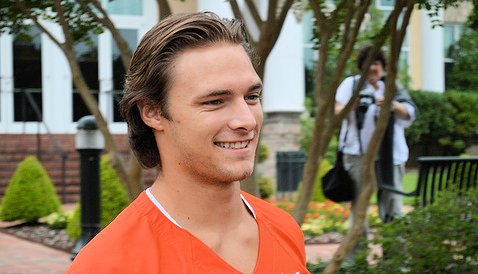 Quarterback Cole Stoudt at the ACC Kickoff on Sunday.

Cole Stoudt
Sr. Quarterback
#18 6-4, 205
Dublin, OH
View Full Profile waited patiently behind Boyd for his chance to start, and while he will have just one season as a starter he can accomplish something that hasn’t been done in five years: Beat South Carolina.

Stoudt was born in Greenville, S.C., but moved with his family to Ohio when he was younger and didn’t grow up with the rivalry between Clemson and South Carolina – the hate-fest between Michigan and Ohio St. was the rivalry that was closest to home.

He arrived on Clemson’s campus in the summer of 2011 and heard all about the rivalry from reporters and teammates and fans, but it wasn’t until the 2011 game between the two schools kicked off that he really understood what the rivalry means.

“I didn’t really understand the rivalry until we played them my freshman year. Everyone was like, ‘this rivalry is this, this and this.’ But I didn’t really understand what that meant until we played them,” Stoudt said at the ACC Kickoff Sunday. “After that first quarter, I knew everything I needed to know about the rivalry, and I have had the same fire in the gut that everyone else has had in the last few years.”

Stoudt, who has never taken a snap against the Gamecocks, said that beating South Carolina would be a perfect way to cap off his senior season.

“I don’t think there is any other rivalry out there like the Clemson-South Carolina rivalry, and I’m very excited about it,” he said. “I will prepare the absolute best I can for this game. Anyone would love to finish out their senior year with a win against their rival. I am going to do the best I can. I am excited about it and I know the team is excited about it. It is something we are emphasizing this year, and we are going to be ready.”

During the spring, it was learned that there is a countdown clock in several of Clemson’s meetings rooms with pictures of former South Carolina quarterback Connor Show signing a Clemson helmet with the words “this is our state” and the number five.

Stoudt said that the countdown clock is just a gentle reminder of what is at stake in this rivalry.

“They (the coaches) are just trying to pick at the back of our brain the whole time,” he said. “It’s not like every day that we hear, ‘Oh, we have to beat South Carolina.’ It’s just something they put in the backs of our minds so we will have a reminder that we are 0-5 against them recently. It is just something that constantly motivates us and puts a little fire in us, and we are constantly trying to get better and we are going to be ready.”

Stoudt said that the Clemson fans constantly let him know which game is important to them, and he knows first-hand about ‘five bombs’ and has seen photos of Clemson coaches posing for photos with South Carolina fans who will hold up the five fingers.

“That is just another thing that puts a little fire in us. But, that stuff doesn’t matter,” he said. “It’s all about what happens on the football field and we just have to go out there and perform. Some fans are like, ‘Ok, I don’t care about winning any of the other games but we want to beat South Carolina.’ I am like, ‘Ok, that is good for you but we want to win other games, too.’ But it’s not about winning one game; it’s about playing one game at a time and winning one game at a time.”