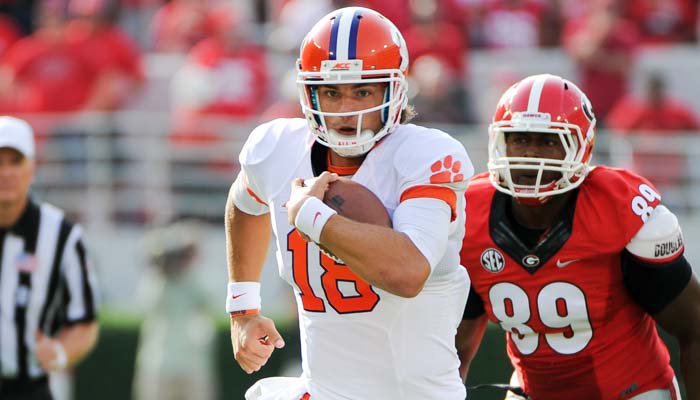 Cole Stoudt
Sr. Quarterback
#18 6-4, 231
Dublin, OH
View Full Profile a text that mixed both history and trivia, and Stoudt told the media Monday that he hopes history repeats itself.

The last time the Tigers managed to win in Tallahassee, a senior quarterback and first-year starter named Will Proctor went out and helped lead the Tigers to the 27-20 victory over No. 9 Florida St. Proctor started that game despite fans clamoring for sophomore Cullen Harper to get the start.

In 1989, Clemson fans wanted freshman quarterback DeChane Cameron to play, but a senior - and first-year starter – named Chris Morocco led the Tigers to a 34-23 victory over No. 16 Florida State. In case you’re keeping count that was the last time the Tigers picked up a win in Tallahassee before that 2006 game.

“Coach Swinney talked to me about that. He texted me last week telling me about it,” Stoudt said Monday in the WestZone. “They do say history repeats itself. It’s cool - it's kind of like the same situation. It's cool and weird at the same time, but you're not guaranteed an outcome. So just go out and play."

Stoudt was asked if he is tired of the questions and the drama surrounding the situation, and he said no.

"No, it's not frustrating. Because I know what the coaches are feeling, and what the players are feeling," Stoudt said. "I know my situation. I know I've won the job. I don't really focus on what other people have to say because they don't know what's going on in the meeting rooms or out at practice."

Morris said that quarterback controversies are nothing new, and he said that he grew up watching the Dallas Cowboys and the competition between an aging Roger Staubach and the younger Danny White. ‘

“That comes with the position. That's what fans are supposed to do, anytime there's anything close to a quarterback controversy," Morris said. "I think (Cole's) kind of getting an unfair shake out of the whole thing. But that's OK. That's the talk of the radio or Internet or fans - and hey, that's a great problem for us to have, let me just tell you that."

Stoudt said that he is blocking out all of the outside noise, and he’s preparing to lead his team into a hostile environment at Doak Campbell.

“Just preparing like it’s any other game, and knowing it's going to be a loud and crazy environment,” he said. “You just know that you have to go out and perform and be the best you can be. You have to go in there with the right attitude and know there is going to be adversity sometimes in the game, get past that and move on to the next play. We are going to make the most of it, let loose and have fun.”